My sister let me know a couple of days ago that she'd be making a quick pit stop not too far from us. Her schedule was at the whim of her unloading/loading appointments, but we managed to squeeze in a little visit!

She phoned last night while we were in the middle of story time and she was on her way making her way through Illinois so we could firm up some details. While I talked with her, the boys messed around, and Zoë sat serenely beside me. Little did I know she was serenely eavesdropping!

She heard a few things like "meeting up" and "Illinois" and "a dress" and "for Zoë."

She didn't say much to me about that phone call, but, boy, was she spreading rumours this morning! She told her siblings that we were going to Illinois to meet up with Auntie K, who had a dress for her!

I had to explain that we were going to a truck stop half an hour away from our house to meet up with Auntie K, who was driving from Illinois to Georgia, and who had something small enough to fit into an envelope, and which she had already addressed to Zoë but hadn't put a stamp on yet, which she would give to Zoë.

So it was a little less of a grand adventure than Zoë imagined it was going to be, but it was certainly grand to get to see my sister! My sweet, flexible, accommodating sister!

She and Allen first suggested meeting at Cracker Barrel for lunch, but I was like, "Yeah, about that...we haven't done any inside dining the entire pandemic and...four of my kids aren't vaccinated...so..."

Instead we met in a grassy area outside of a Wendy's for an ice cream picnic, which was just as lovely, I think. Restaurants are hard for me, anyway, but in a pandemic?! Sounds like a nightmare.

As promised, Kelli had an envelope addressed to Zoë. Inside was a bedazzled unicorn wallhanging, which Zoë loves, of course. 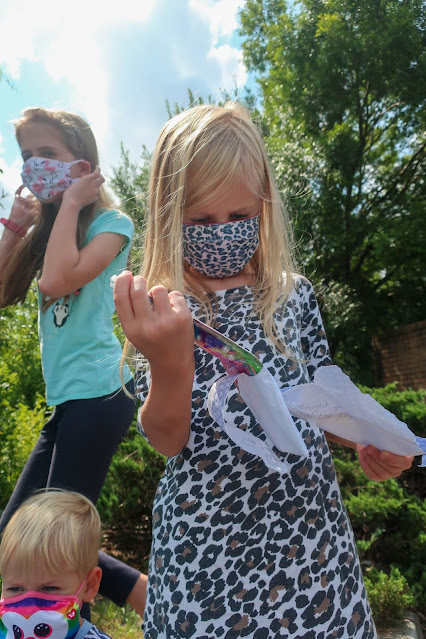 Kelli had little trinkets for the rest of the kids, as well. She had a little truck for Alexander (who is wearing the owl mask that Auntie K put in an envelope addressed to him several weeks ago (though she managed to mail this gift)): 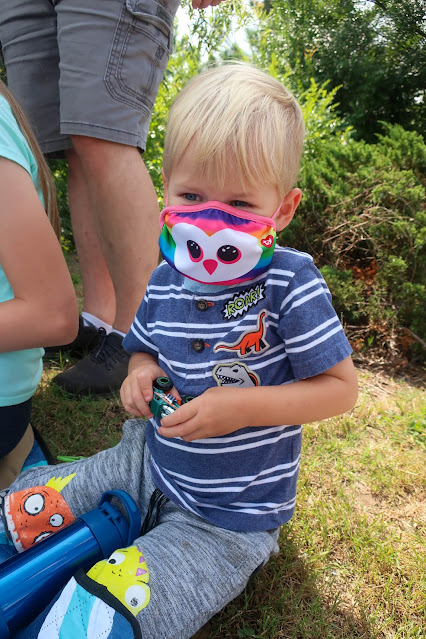 For Benjamin, Miriam, and Rachel she had little fidget keychains (with little plastic dimples you can "pop"...like bubblewrap...but reusable): 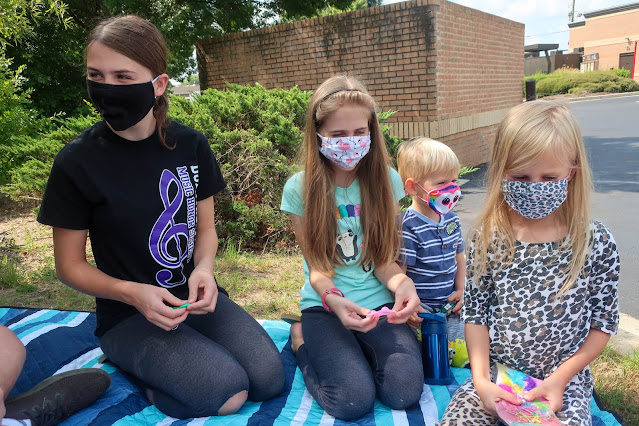 I didn't catch a picture of Benjamin; his keychain is shaped like a little man. The older girls' poppers are just ordinary-shaped. Andrew was quite jealous of the poppers so we might have to get him one to keep at his desk so he can play with it while he's thinking. He didn't get anything, poor man.
Kelli gave me a container full of frozen keto-shepherd's pie that she'd made a few nights ago. She's been sending me all sorts of recipes, which has been so helpful. Tonight, for example, we had pizza for dinner. Instead of feeling sad, I just made myself some "chaffles" really quick (cheese and egg cooked in a waffle iron—super easy; I'm so glad Kelli told me about them) and dipped them in marinara sauce. "It's like deconstructed pizza!" Rachel observed.
Anyway, the shepherd's pie was delicious. I know because I had some for lunch after we got home!
Kelli and Allen had to be in North Carolina by 6:00 this evening, so we had to make do with our mid-morning visit. But it was so good to see them, if only for a little while.
Alexander was quite excited to see Auntie K. He made a couple of cards for her, as well as a paper flower (which he decorated to look like a "diseased tiger"). Here they are playing "Round and Round the Garden," with Alexander getting a little tickle under there. 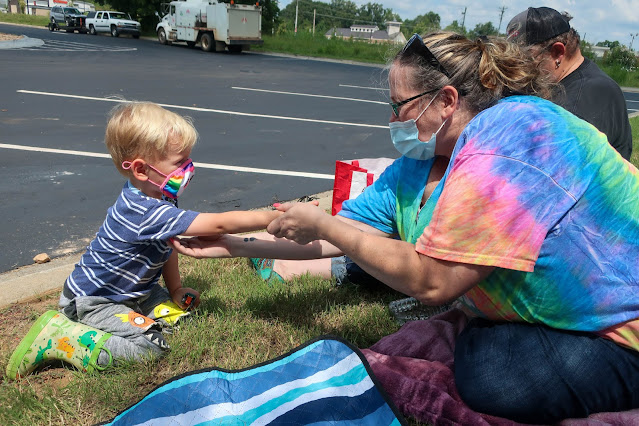 His favourite part of the day was seeing Auntie K, he announced at dinner, "Though I didn't know she was going to bring that strange man with her!"
"That 'strange man,'" I said, "Is her husband! That's Uncle Allen! Didn't you recognize him?"
"Oh, no! I forgot!" Alexander said, shrinking with embarassment.
I suppose he's justified, since we haven't seen them for over two years and Alexander is only three years old. But he just said "strange man!" in such a funny way. He didn't mind the strange man (after all, he did buy him ice cream); he just wasn't quite sure who he was.
Before it was time to leave we took off our masks and took a quick group photo: 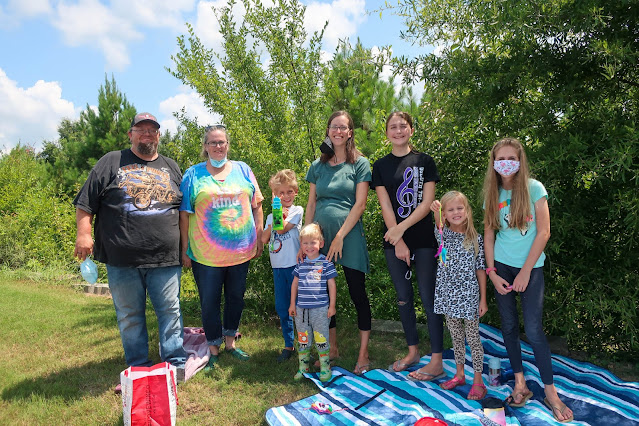 Well, Andrew took a quick group photo. He got his finger in the way of the one he took with my cell phone, so I joked that he was just looking for away to feel included since we were leaving him out.
And I had Andrew take a picture with just Kelli and me. I don't know when the last time is that we've taken a picture with just the two of us, but I've been thinking a lot lately about getting old and missing opportunities. My mom's cousin Rita passed away today, and although I didn't know that when we took this picture, her eminent death has been weighing on my mind; but also almost losing my sister (not Kelli) this past month was hard, thinking about how impossible travel across the border is right now and how far away she is, in general, and how long it's been since my siblings have all been together...twenty years?! And how I don't know how we'll ever all get together because of logistics. Especially if someone dies young. Like I always just figured we had time to get together. But anything can really happen. And then I thought of so much other family drama that has made me wonder how and if Andrew's siblings will ever be in the same room together because even though the physical logistics of that are a little simpler these days, the emotional logistics of that are looking pretty impossible to navigate. And it all just makes me so sad because I just want everybody to get along, even if they disagree about things like where it's appropriate for a family to eat during a pandemic or how you choose to raise your children or what your faith looks like. And I'm just so thankful for the long, long way my relationship with Kelli has come and how...I think...even though we both make very different choices, we're able to respect and love and support each other in those choices (because differences are great and that's what family is for). And I'm pregnant and emotional, so just take a picture of me with my sister, alright?
So we took a picture with just the two of us together: 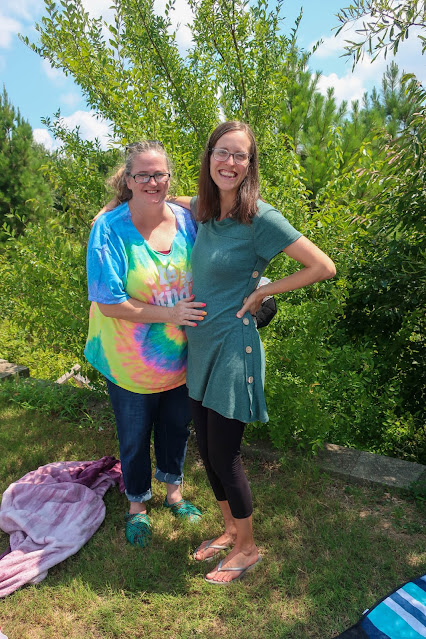 ...emphasizing my baby bump...which isn't very visible...even though when I look down at my belly it seems ginormous.
Kelli was like, "So, do you have a bump yet?"
And I was like, "Ummmm..." (indicating my bump).
And she was like, "Yeah. Ummmm..." (indicating there's nothing there).
There's definitely something there, but I can also admit that when I see pictures of myself I can see that it's not very there. Kind of like how emotionally, I feel like Kelli should be taller than me. I guess somehow in my memories she's just so tall (to my credit, I haven't really lived with her, except in short bursts, since I was about six years old, which is where I think these tall memories must be coming from). I know that technically I'm taller than her, like, just as a little factoid or whatever. But emotionally my brain seems to believe that she's taller. Or that we're at least right around the same height. Or something.
So it was shocking to me to see this picture of us side-by-side as well. I have several inches on her.
Who even knew?!
I mean, I knew. But I also didn't know.
Anyway, it was wonderful to see Kelli and Allen both. And it was remarkably cool and not humid, so that was nice! Already our weather feels a little autumnal, though I'm sure we'll get some wicked hot weeks before autumn is truly here.
Posted by Nancy at 10:46 PM