With public schools being back in session, our community pool has cleared right out. Now when we go we usually have it all to ourselves (sometimes there's another person or two using it). Today was mostly an all-to-ourselves day!

Now, ordinarily, having lots of friends to play with at the pool might be fun, but these aren't ordinary times, so we're glad for the space to splash and play at our leisure without worrying about social distancing. We did, however, find one friend at the pool today who we're fairly sure was safe. I mean, its skin may release toxic skin secretions, but that's mostly only a problem if you don't wash your hands before you pick your nose...and we were at the pool where there was plenty of water.

Yes, Benjamin found a Cope's grey treefrog clinging to the side of the pool. 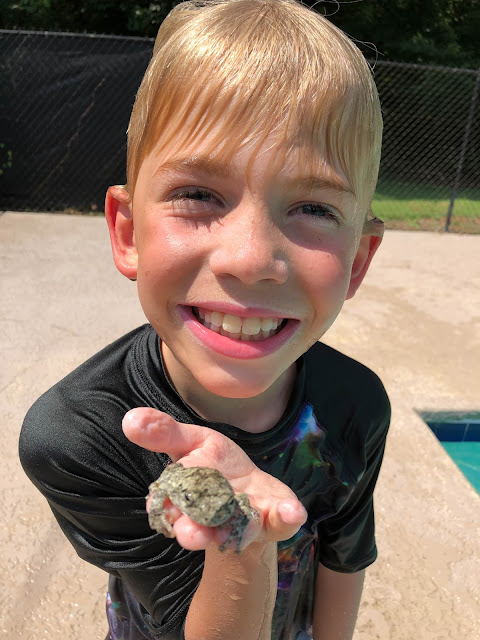 Actually, Miriam found it, screamed (because "the deck looked like it was moving!"), and Benjamin adopted it—in a rather Elmyra way—to be his friend.

He played with that poor frog the whole time we were at the pool. They swam together, they judged diving competitions, they made the girls scream, they pretended they were the lifeguard (there's no lifeguard now that school has started). Benjamin even put it on a kick board and pushed it around the pool, pretending it was on a boat. 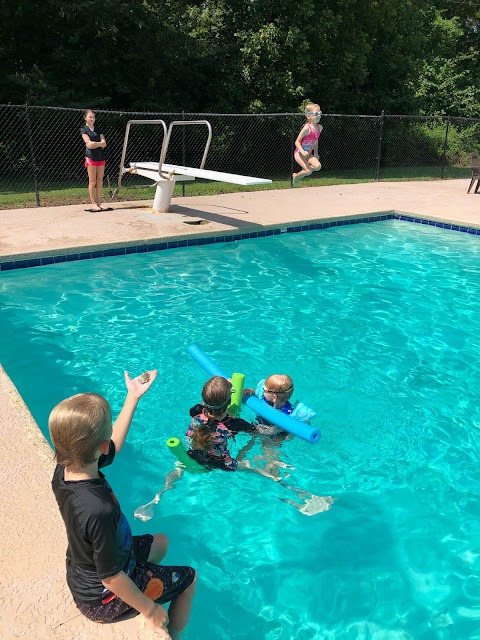 Benjamin made Miriam babysit the frog whenever he wanted a turn going off the diving board. 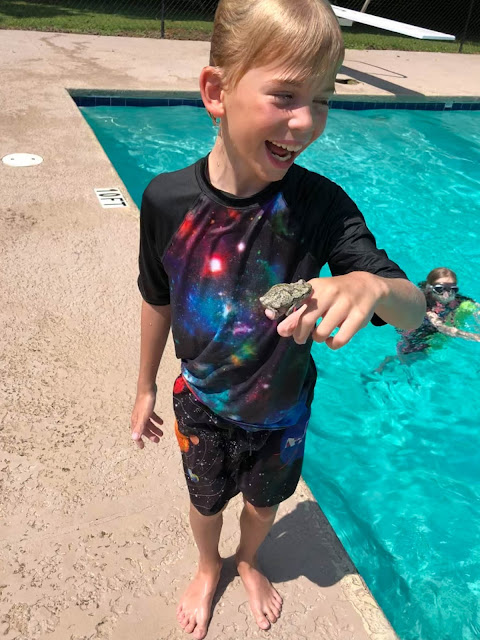 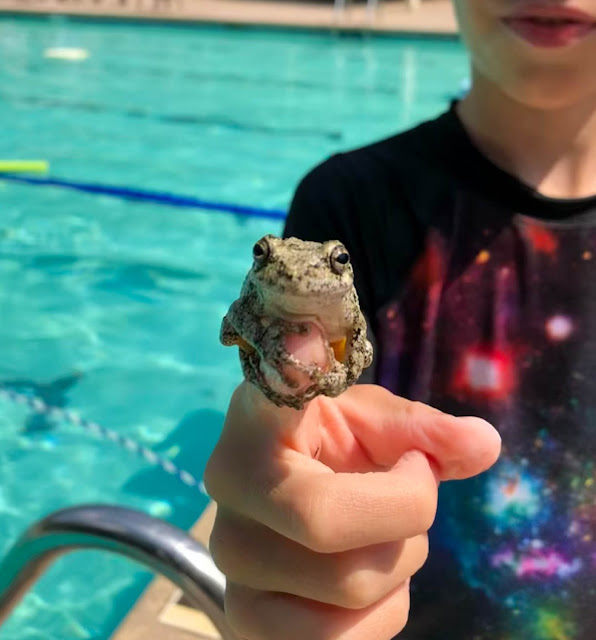 That ended up inspiring its name. Well, that and all the other clinging it was doing (it is a treefrog, after all). At first Benjamin decided its name would be Sir Croaks-a-Lot, but this name bothered Alexander to no end because despite how many times he commanded the frog to croak, the frog wouldn't croak.
These particular treefrogs are usually mostly inactive during the day (unless they're being chased around by children) and save all their croaking for the nights. I can hear them chorusing outside right now, as a matter of fact. But this frog refused to make a single noise.
So (to make Alexander stop yelling, "Croak, little frog! Croak!"), Benjamin changed its name to Sir Clings-a-Lot.
Miriam suggested the name Kermit, but the kids decided that was too cliché, which I suppose is only partially true. If a name is so cliché that no one actually uses it anymore, is it still a cliché? I mean, I know that there is Kermit the Frog, and he's pretty popular, so in that sense the name lacks original thought. However, I don't know that it's overused. I've actually never met another frog named Kermit. So in that sense it's original.
I brought up dog names to back up Miriam's claim that Kermit is too cliché a name for a frog. Fido is considered a cliché dog name, but—think about it—have you ever met a dog named Fido? I haven't (though I just read a little bit about the history of Fido, which I didn't know before; I just knew that Fido is, like, the quintessential dog name). Anyway, aside from that one Fido, I don't know of any other dog named Fido.
But...Tank?
I think I've known half a dozen Tanks. At least.
Yet somehow Tank is considered original and Fido is not.
Whatever the case, Benjamin named the frog Sir Clings-a-Lot. And it was a good name because the frog was clinging a lot.
Here they are, sitting in the lifeguard's chair, pretending to guard the pool: 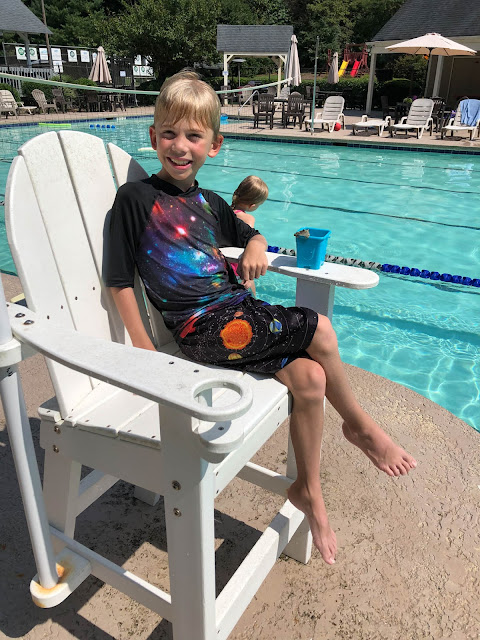 They called adult swim a few times and had everyone climb out of the pool so that they could announce it was time for kid swim and have everyone scream with joy as they plunged back in. Mostly they took their guarding very seriously. 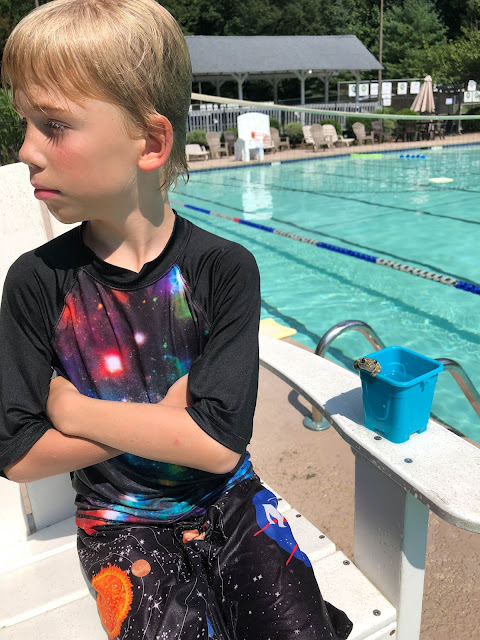 As much fun as those two were having together, I think Sir Clings-a-Lot's favourite part of the day was when I announced it was time for us to head home so they could have the pool all to themselves once again. 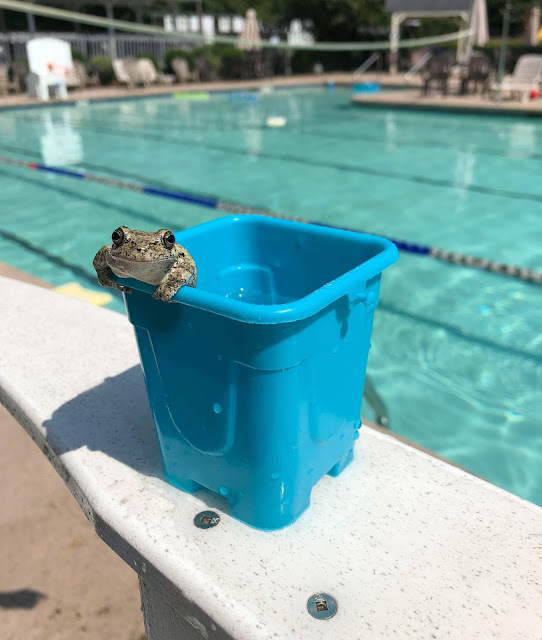