Yesterday while I was taking a nap Andrew watched The Prince of Egypt with the kids.

That part at the beginning when all the babies are being rounded up and...disposed of? Horrifying.

"Why are they doing this?" he demanded to know.

"Because a prophesy said that one of the babies would free the slaves," Andrew began to explain.

"To free the slaves!" Alexander said. "You're gonna need sharp scissors for that!"

"A baby can't even hold sharp scissors! It's not allowed! Prophesy doesn't know very much about babies!"

He continued to mutter random things about Prophesy (who he seems to believe is a person) and sharp scissors under his breath for the rest of the day.

And forget the part where they load Moses into a basket to float him down the Nile.

"This seems like a very bad idea..." according to Alexander.

Anyway, that movie shook him to his core (and has me thinking we need to do an FHE lesson on basic bible stories for that little guy; the things you forget you're not teaching your kids because you've already taught your older kids those things (am I right, Mom? I think it was you who told me about this little parenting paradox (I'm gonna need a spreadsheet or something for keeping everything straight))).

We played a few games as a family before bed last night. Alexander likes to play his own little version of Pictionary while everyone else plays games. He gets really excited about it. Whenever we pull games out he rushes to find paper and pencils and crayons. He calls it, "Guess What I'm Drawing!"

So while we played games, he drew pictures, and then he wanted to staple them together to make a bedtime book, so we did that.

My kids are accustomed to drawing on scrap paper, so they're used to having text and things on the back of their pictures. They often read what's on their papers and usually find them acutely boring, since they're usually some form of academic paper that Andrew or I are writing or editing or reviewing. But sometimes they're from book manuscripts that Andrew's working on typesetting; he likes to print trial pages with different fonts and line spacing and margins so he can get a feel for how it will read.

Alexander drew on the back of some of the latter pages last night. Then he and Zoë snuggled into our reading chair upstairs for our novel-reading time (picture book reading happens downstairs, typically) and while they waited for me (the novel-reader) to join them, Zoë flipped over Alexander's bedtime book ad started reading from the introduction of the book Andrew is designing currently. 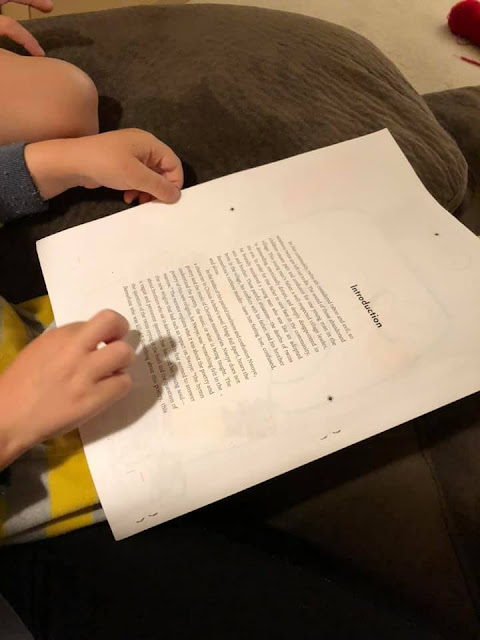 The introduction begins, "In this community, twins are considered taboo and evil, so newborn twins are left out to die…"

"WHAT?!?!!" Alexander gasped even harder. "Who even does that?! This book makes me feel so extremely sad! Leave newborns out to DIE?!"

What is this world he's living in!? First we tell him that Prophesy (whoever that is) suggests handing a baby a sharp pair of scissors (to free the slaves, of course), so Pharaoh starts killing babies en masse, and now we're telling him that in certain communities they just leave newborn twins out to die?!

That's all so messed up!

"I'm going to kill those...." Alexander began and then, making eye contact with me, amended his statement to read a little softer. "I'm going to be mean to all those mean people! And I don't think I will want to read this book when it's actually a book!"

Those two were still all over this topic this morning.

After breakfast Zoë found another copy of the introduction in the scrap paper bin.

"WHAT?!" she gasped. "Who keeps printing off this horrible page?!"

"Dad," I said. "He's typesetting a book and is printing off test pages as he changes things. It's fine. Just ignore it. Draw on the back and..."

She drew on the back, alright. 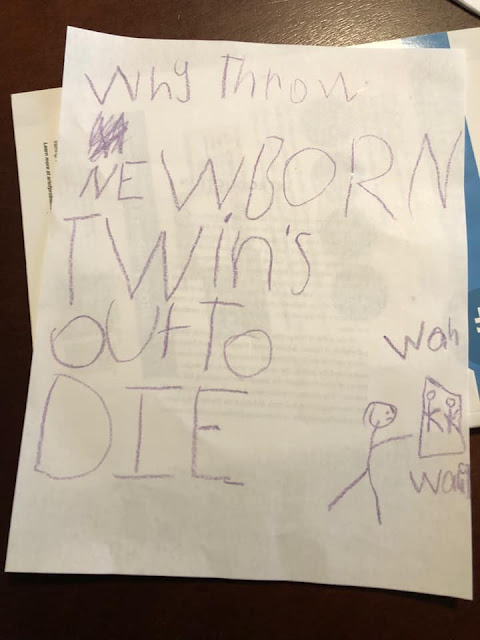 "I think this is another page of the same introduction," Zoë said, digging through the scrap paper bin. "I need to see if I can find more. Piece it all together. Read the whole thing. It will give me more context!"

I had to tell Andrew what was going on and he came to help calm their little riffled spirits.

"I only printed out three pages," Andrew explained. "So that's all there is to find."

"With changes," Andrew pointed out. "And the book isn't about or promoting the killing of newborns. It's about humility, but the author is referring to the book Things Fall Apart, which is set in pre-colonial Nigeria and talks about a certain community that believed that twins were bad luck, and so in this one, singular, long-ago community, they would leave twins out to die, but..."

It's been quite the day!

Please, no one breathe a word about infanticide in ancient Greece/Rome/etc. or how the one-child policy in China led to increased abortions/abandonment of female babies or anything else about babies needlessly dying.

At least for a little while.

I think this topic has had plenty of air time in our house for one day.

Alexander's about ready to break all the house rules, get the sharp scissors out of the kitchen drawer (verboten to him, but, I mean, Prophecy suggested it!) and go to war against these mean people...