Early this afternoon we stopped by Barnes and Noble so that Zoë, Benjamin, and Miriam could get their summer reading books on our way to the pool. This was the first time the kids have been to any sort of store in ages, but we missed out on the summer reading program last year and I figured we'd be pretty safe running into a nearly empty bookstore in the middle of the day.
Here are my double-masked children with their spoils: 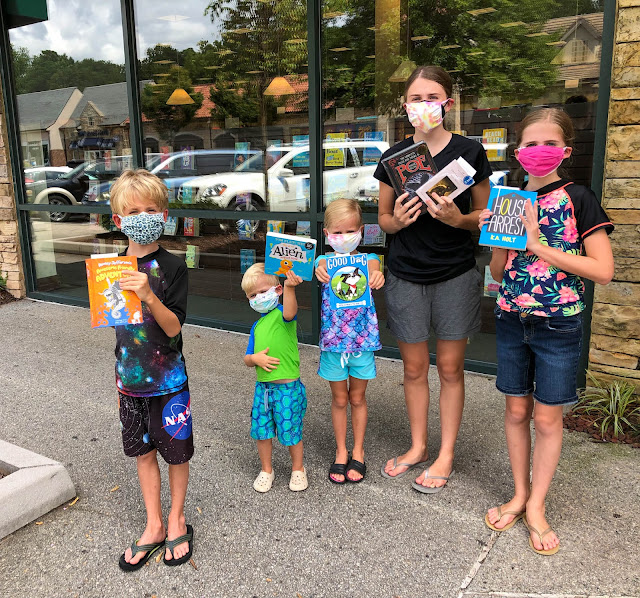 They would have had better pickings had they finished filling out their forms earlier (you only have to read eight books), but they left it until the very last moment (a couple of them literally filling in their last book minutes before leaving the house, even though they've all read more than eight books over the summer). But when you leave things like this to the penultimate day of the program, you get what you get and you don't throw a fit.
Zoë, Benjamin, and Miriam each got to pick a free book (which is why their pickings were slim). Rachel used some of her hard-earned babysitting money to treat herself to some new books (she picked out a beautiful volume of Edgar Allan Poe as well as a copy of Frankenstein, which was rather apt because she realized on the way home that today is Mary Shelley's birthday (she's a bit of a Mary Shelley fan)). And then I let Alexander pick a book from the 50% off rack (we're big spenders over here). He chose There's an Alien in Your Book by Tom Fletcher.
They must have some good branding (good job, Greg Abbott) because Alexander immediately recognized the artwork and style from other books in the series (such as There's a Monster in Your Book, which we've taken out from the library more than once).
Since his book was only 50% off if you buy two 50% off books, I also grabbed a copy of The Phantom Tollbooth because I've been meaning to read that to the kids, anyway.
Each of the kids got to "pay" individually at the counter (by handing their books and reading forms (or babysitting money) to the cashier). When it was Alexander's turn, he handed the cashier the book upside down, so she just scanned it, along with The Phantom Tollbooth, which I handed to her cover-side up, which meant she noticed the 50% off deal.
"Did you want to go grab another book from the 50% off table so you can get the discount?" she asked.
I told her that I thought Alexander's book counted. She checked and it did. So we got two books for the price of one. And then on our way to the pool I joked that that's why we have so many kids—because we snagged them from the 50% off table and the cashier kept asking if we wanted to go back and grab another one to make sure we got the discount.
So we took a few pictures of our 50% off discount kids at the pool...
Miriam and Rachel: 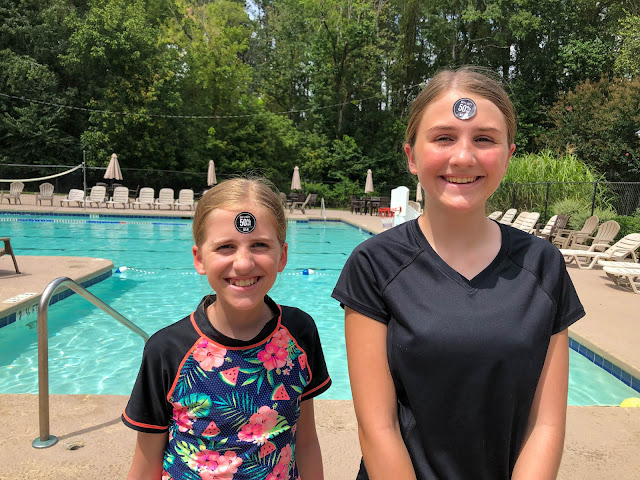 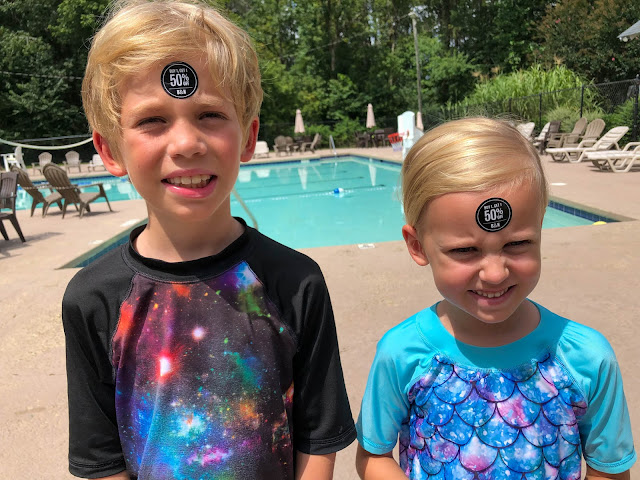 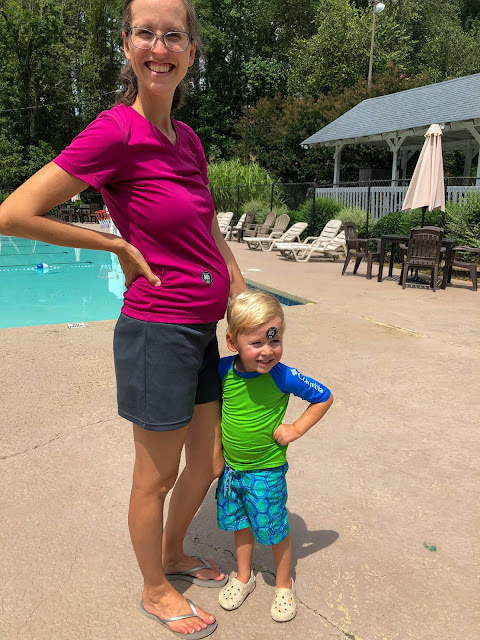 This last picture is really for Crystal, who complained that I don't post enough belly pictures. But no one ever takes pictures of me...so it's not entirely my fault! That's my 26.5 week belly, we're right on the cusp of the third trimester. Part of me can't believe how fast this pregnancy is flying. But another part of me can't believe how slowly it's going, either...so...maybe it's just going a regular speed.
Anyway, we had the pool completely to ourselves this afternoon and the kids had a blast. We headed home just as a thunderstorm rolled in, so our afternoon was perfectly timed. And what do you think the kids did when we got home?
Settled in to read their new books, of course!
Posted by Nancy at 10:15 PM