Drizzly weather meant that we had the park mostly to ourselves. We first went on a long walk through the woods and then stopped to play at various playgrounds on our way back to the car. While the kids played, I read articles and wrote (which honestly has been a dream of mine since starting grad school, though the dream involves a little more afternoon sunshine than afternoon showers, but I guess that doesn't matter because the dream is hardly ever realized, anyway). That's another perk to having pool season be over and playground season begin; there are more opportunities for "the dream."

Today I only had Benjamin, Zoë, and Alexander, who insisted on dressing up as an owl even though it was nearly 80°F! He had on that darling (if I do say so, myself) crochet had and his hood the entire afternoon until he got so flushed that I forced him out of it. 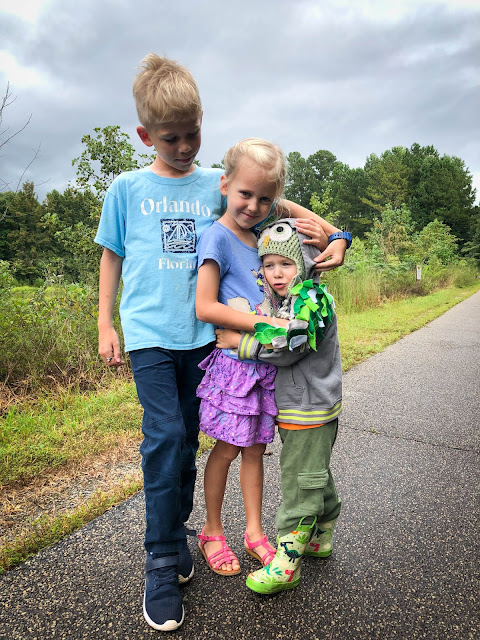 He's been very interested in dressing up lately and most days you can find him wearing an assortment of super hero t-shirts and capes or his owl costume. One day he was a zombie lion. In fact, let me just find that video really quick (from September 10):
Anyway, I had my three littlest ones with me (plus the very littlest one as well, of course). And Alexander was dressed up as an owl: 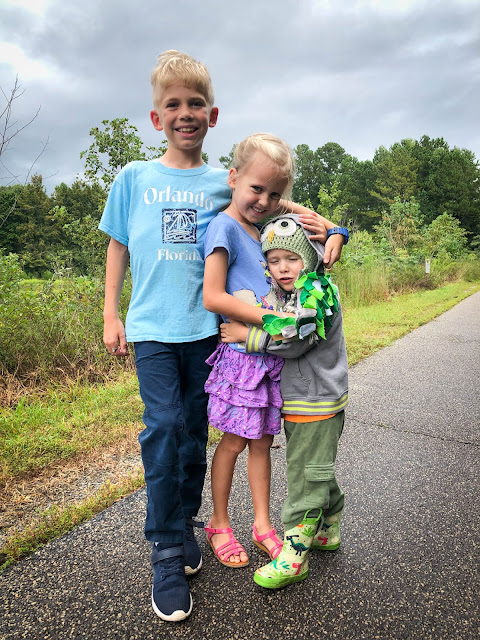 This obsession of his—which has lasted for years now—is very appropriate lately because he's been pronouncing his name "Owl-exander." He says a lot of things with an "-owl-" that should be with an "-al-"; for example, "Owl-exander" likes to eat "s-owl-ad."

He ran through the park "hoo-hooing" and flapping his wings all afternoon.

Miriam stayed home to practice the organ and embroider (it's Friday free day!) and Rachel stayed home to bake Andrew a birthday cake (which sounds so delicious and will probably elicit a rant from me in the near future).

The park was so empty that we even had the skatepark to ourselves. That never happens and the kids have been dying to try it out (but I never let them because it simply doesn't seem safe when there are skateboarders zipping all around): 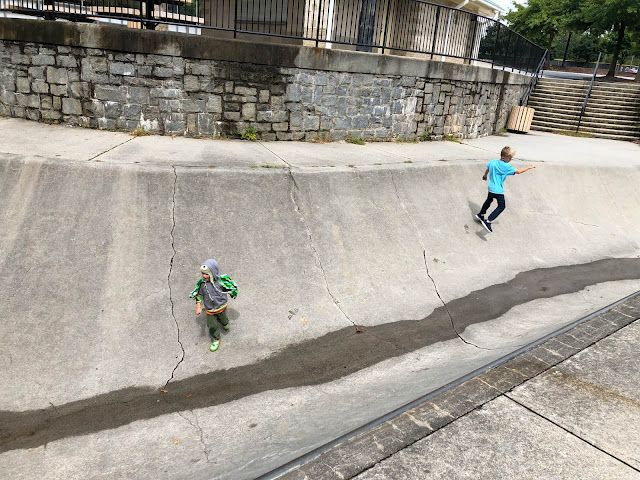 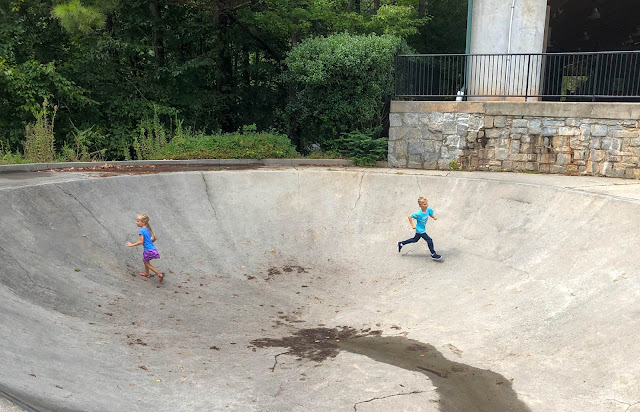 Benjamin was able to give me a brief history of skateparks. Did you know that the inspiration for parks such as this were empty swimming pools? I didn't know that. But he did somehow. (And it's true; I looked it up).
Later Alexander told me that he was riding "on the fulcrum of the seesaw," which was surprising, to say the least.
And then tonight long after she should have been in bed asleep, Zoë tiptoed into my room to tell me, "You know, even though it's not an acid—because it's the most neutral substance in the world—water is still, like, stinging the slide burns I got at the park today..."
I told her that sleep would probably help that.
Andrew told me that this is all evidence that homeschooling is working (because I probably have a bit of a breakdown every couple of weeks or so, wondering if I'm doing enough and if the kids are learning enough to be well-rounded people; homeschooling and home-churching and home-everything-ing during a global pandemic is—phew!—exhausting, but we're getting through it).
Posted by Nancy at 12:22 AM