Wednesdays are kind of a busy day. With a work meeting in the morning and class in the early evening (that's two—count 'em—human interactions in one day; both on Zoom, but still...), things can feel a little chaotic for me. But only, I think, because our family unit isn't used to Mom having set meetings.
Usually I just squeeze in the stuff I need to do when I can.
Miriam also has organ lessons on Wednesday and on this particular Wednesday we'd also signed up to take a meal to a family in our ward (who just moved here in July—and just around the corner from us) who has twins in the NICU. They were born at 24 weeks about three weeks ago...right around the time I was 24 weeks along as well. That's so early; they're just tiny little things (but are doing well).
When Benjamin heard about it he immediately wanted to make them a set of hats, I think in part because I recently had my knifty-knitter stuff out to make Phoebe's Christmas stocking. So I taught him how to use the knifty-knitter and he worked rather diligently to finish those two hats by yesterday so we could drop them off with dinner. He did a great job! 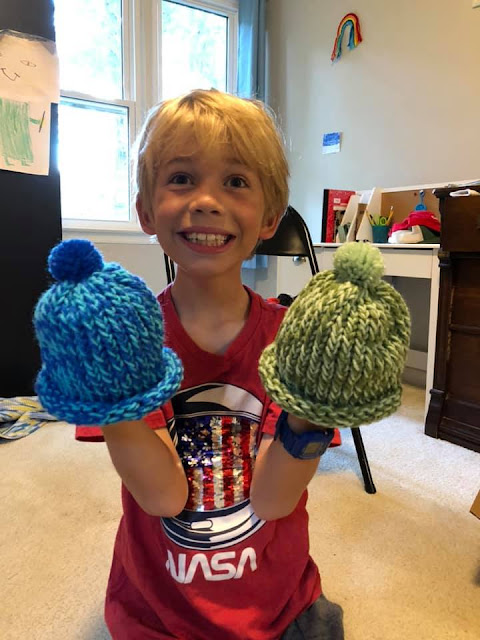 Rachel made chocolate chip cookies to send along with dinner, and we all signed a homemade card with a bird print that Rachel made.
Andrew said we might have overdone things. Whether that's due to the fact that we have had virtually no human interaction in recent history or whether it's due to an overflowing of NICU sympathies, I don't know. But sometimes it's nice to overdo things.
Anyway, Andrew made double dinner—a pan of enchiladas for us, and a pan of enchiladas for them.
So really I did very little in terms of giving this family dinner, other than coordinate the efforts of my family giving them dinner (which is a job unto itself, is it not?).
I didn't have enchiladas for dinner either because I knew I had to really watch my carbs with this meal since I had class from 5:30 until 7:00. We planned to eat precisely at 5:00 so that I would have time to scarf down my meal and then hop on the exercise bike for a few minutes before class, but then I was solely at the mercy of my pancreas and placenta (or that Andrew calls my "plancreas") to not screw up my blood sugar levels too badly.
So my plan for dinner was some leftover keto-style king ranch chicken (that I made for dinner on Monday) with some carefully counted tortilla chips for the bulk of my carbs (leaving nothing to chance here). I would not be eating the wild card of bean-filled corn tortillas without the guarantee of a full post-prandial workout session.

As everyone was rushing around getting the final trappings ready for dinner—lettuce, cheese, salsa, sour cream, olives, water, forks, etc.—Andrew and I collided in the doorway between the kitchen and dining room.
This apparently reminded him about tomatoes. Probably because that was a part of dinner that I would actually be eating.
"Oh! Tomatoes!" he exclaimed. "I fordidn't!"
He made a lovely portmanteau, blending together "forgot" and "didn't [cut any]."
"It's okay," I said. "Rachel's on tomatoes."
And she was (she's so helpful in the kitchen (for real)).
Posted by Nancy at 10:47 AM