I'm a little exhausted today. Part of me is trying to figure out why I can hardly keep my eyes open (and why I couldn't remember where I left my glasses after I took them off to do some hip-opening exercises...which will be explained later). The other part of me knows that (1) I've been fretting about my sweet sister-in-law all day today (and all day yesterday, honestly...which may also be explained later), and (2) we had an unusually busy day today.

Unlike Sleeping Beauty, who falls asleep because she pricks her finger...I wake up in order to prick my finger at the same time...every day. So I got up at my very usual time and had my very usual breakfast and then started in on our very usual homeschool routine before leaving the kids with a list of things to accomplish while I went to my weekly zoom meeting for work (10 am).

Then I bustled downstairs to knock out some math with the little ones, who still need a bit of direct instruction before getting started on that subject (the older girls seem to do fine on their own and I'm fine with them being fine because that's largely how I got through math—reading a textbook and working through problems until I understood it (only I didn't have Khan Academy or YouTube or a father who was a statistician to fall back on when I got stuck (though I did have a mathematician uncle (but only after we moved to Utah)))).

Then I quickly made myself my usual lunch (never deviating from meals means no surprise blood sugar numbers, but also that I wish I could eat everything else under the sun, which is ironic because I know that after the baby's born, you know what I'll crave when I'm hungry? My "usual" meals, of course, no matter how sick of them I become before she gets here). Oh, I switch up vegetables and things...but the carbs and proteins remain the same.

Anyway, scarfed that, asked the older girls to help the younger kids get their lunches ready and then zipped out the door to my doctor's appointment (12:30).

It was supposed to be on Thursday, with an ultrasound for a growth check (because gestational diabetes requires it) but the ultrasound technician was going to be out that day, so my appointment was moved to today at the last minute.

Baby's doing great; they guess she's about 2 lbs. Everything's developing normally, I have a lovely amount of amniotic fluid. But...she's breech...silly kid. She had been vertex (head down) at my last scan, but she's adorably transverse, so I'm doing a number of exercises to encourage her to flip around again and drop into a more presentable position (thus the reason I took off my glasses this evening and then...like...where did I put them?! (but don't worry; I found them)).

These exercises are in addition to my post-prandial thanks-for-eating-this-life-sustaining-energy-source-now-quick-burn-it-all-off-before-it-kills-you exercises.

Good thing there's a baby at the end of this. Look at her being all adorable: 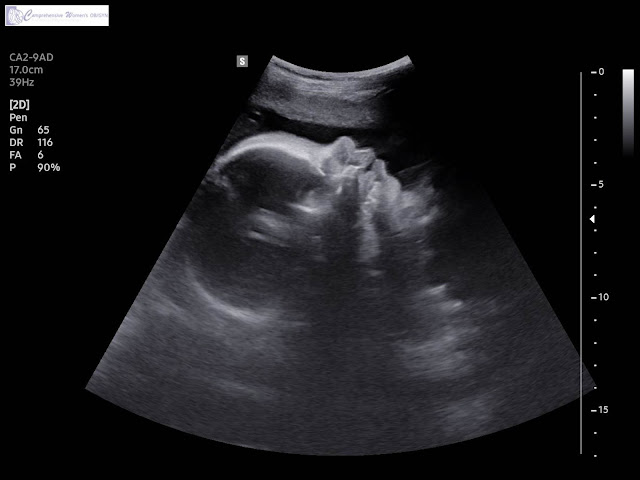 At least...as adorable as one can be in a creepy sonic x-ray image: 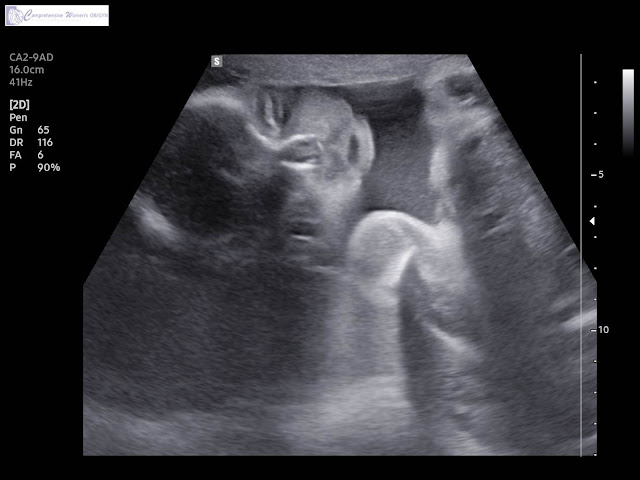 Other than that, we're all good.
Since I'm diabetic, Phoebe has a bit of an eviction notice (39 weeks) but I've been worried about that particular date because it's Thanksgiving Day. Not that I've hit 39 weeks with a baby in the past decade (Benjamin, Zoë, and Alexander all came earlier than that), but just because if I make it to 39 weeks...would the doctor even want to induce on Thanksgiving? Or should I just wait it out?
Turns out Thanksgiving is my doctor's "holiday" for working, so she's already planning on being on-call. "And," she joked, "My in-laws are going to be in town so I might prefer to hide out at the hospital with you, anyway...if you know what I mean."
So, we should have this baby by Thanksgiving at the latest. My doctor doesn't want me to go beyond that because while the baby seems to be growing nicely, I...haven't been gaining any weight...which means I'm losing weight...and she doesn't want that to continue for too long (though I'm bound to gain at least some weight in the coming weeks). No ketones or anything like that, so I'm not dangerously wasting away. But, still, it's not something we want to continue for long.
After I got home from the doctor's office, Andrew immediately left to take Miriam to her organ lessons. I did a few things for work and school and then took a nap while the kids played Minecraft. Then I got up, did some more schoolwork, folded some laundry, made the "upstairs kids" clean their rooms.
We ate dinner promptly at 5:00. This meal is somewhat of a wildcard meal, which usually calls for a little more post-prandial exercise. Wednesdays make going for a family walk tricky because I have class at 5:30, so I simply wolfed down my dinner (Rachel made waffles; she made me special "low carb" waffles, which allow me to pair them with a little bit of jam and fruit to round out my carb count for the meal) and then hopped on the exercise bike for a few minutes before class.
I finished class just before 7:00 and then started in on our bedtime routine...which I recognize is ridiculously long because the kids rarely are in bed before 9:00...but it is what it is. And then I was, like, completely wiped out. But I had to stay up until 10:00 for my bedtime snack, so I read a chapter in one of my textbooks, did some stuff for work, ate my snack, and now...here I am...wondering, yet not wondering, why I'm worn out from the day.
There were a lot of comings and goings (more than we're used to at our house), and meetings (which are exhausting, even if they're on Zoom) and lots of extra worrying about babies and things.
But, here I am, 28 weeks and 3 days looking fresh as a daisy...ish: 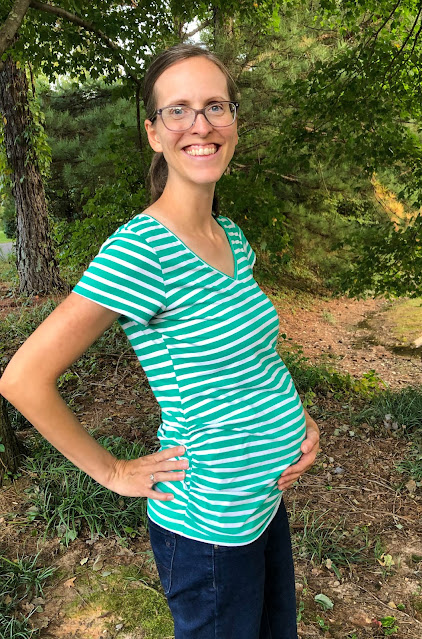 But only because this picture is from a family walk that we went on a few days ago (courtesy of Rachel), when I wasn't feeling quite as worn down as I am today (at 28 weeks and 6 days, which is basically 29 weeks, so we'll count it as that).
Oh, I also meant to mention that Zoë took a while to get into the proper position for labour (still being not-quite-right at 37 weeks, but by 38 weeks she was in position and ready to go, and...you know...here). So I'm hoping Phoebe follows her example...not in taking a long time to get into the proper position but in, you know, getting there at all.
Posted by Nancy at 11:42 PM