I got my first paycheck this past week, which was kind of a surreal feeling. Like, I knew I was working before, but it just felt like...something I was doing...not like I was actually working. Getting that paycheck really drove home the point that I have an actual job.

Kinda wish I could set up direct deposit, but we'll work that out later.

For my job, I recently created a beautiful little "call for articles" advertisement, which I sent out on our listserv of a thousand or so people, which felt like kind of a big deal. Like, I've sent emails to a hundred people on the regular (I've managed our "family" listserv, so to speak, for the last decade) but never to nearly a thousand.

It felt kind of like handling a large wad of cash for the first time. Only emails.

"Imagine if it had a typo!" Rachel mused at dinner when I was sharing this recent accomplishment.

Like, we're the department of language and literacy and I wrote the email and proofed it and sent it to my supervisor to have them read and proof it and we both missed my mistake, which is...super cool. Luckily, I was able to fix the mistake before I sent it to the department secretary to have her blast it to her even bigger listserv.

To make myself feel better for my very public mistake, I will now brag about myself a little bit. I was commenting on one of my classroom forums and wanted to use a quote that I remembered from our readings. I'm in a digital resources class right now, so the article was about digital resources, and we've only had a handful of readings so far since the semester only just started. But I couldn't find the quote anywhere! I went through all my articles (using the search function even) and I could not find the quote. So I turned to Google Scholar to see if I could look it up there, because I even knew who one of the authors of the paper this quote supposedly came from was (I happened to co-author a paper with her over the summer, which I submitted to a journal the day before the semester started; fingers crossed).

It's really nothing fancy; it's just "attracting and maintaining attention is the currency of the online world."

And I really liked the idea of attention being a currency. Clearly. Because I came up with it. The word "currency" isn't even found in the article. It was just a metaphor my brain came up with while I was reading and my brain liked it so much that it remembered it for later...and I was just so perplexed because I wasn't able to attribute the proper author because I couldn't find the quote anywhere!

To make myself feel a little more humble, I will now tell you about how Andrew (and Rachel) and I changed the garage lights.

First of all, I'll remind you that I'm pregnant. Not only am I pregnant, I'm in my third trimester, so nesting is kicking in a little bit, which means that Andrew's quicker to jump on my honey-do list than he sometimes otherwise is. For example, he finally hung a stained-glass window that has just been...sitting on top of one of our bookshelves for the past two years waiting to be hung.

Or shopping. So Andrew does the shopping.

He went to Costco on Saturday but before he did he tossed me their flyer and told me to circle things that I thought we could use. Ordinarily I skip over all the non-grocery items but yesterday some outdoor lighting caught my eye. They were super on sale and they looked nice and we needed new lighting. So I told him to grab some.

How hard could they be to install?

He quickly agreed because the outdoor lights have been "on his list" since we moved in. They're in really bad shape. Like parts of the lantern had fallen off and the bits of the lantern that were left were so rusty that we could hardly unscrew them to get the lightbulbs out (which, thankfully, were LEDs so we'd never had to change them before). Anyway, they were just in bad shape.

So he brought home these new lights and we worked together to install them.

First, I went into the basement to flip the breaker so we wouldn't electrocute ourselves. I found the breaker labeled for the garage and switched it off, then texted Andrew to say, "Garage is off."

So I tried the TV room breaker.

That's not the weirdest thing about our house.

So I went outside and helped him rewire the lights. Technically speaking all I did was hold up the light while he did all the wiring. It's a thankless job, but somebody's got to do it.

Once he had it all wired, I went back down to switch the breaker on and then, because the light didn't automatically turn on, I used the light switch to turn on the outside lights. The far light turned on, but the light we were working on did not. Clearly we'd wired it wrong.

So I turned off the light switch and then went down the the basement and diligently switched off the breaker for the exterior garage lights. Then we rewired the light a different way, reattaching it to the light sensor (because maybe that was important somehow?).

I went inside and turned on the breaker and then returned to the light switch to turn that on.

So I ran downstairs and turned off the breaker. We unhooked the light and then realized that...it's the middle of the day!

Perhaps the lights weren't turning on because they have built-in light sensors!

So we found the sensor cover, put it over the sensor, and tried connecting it again.

I'm standing there, holding this lantern over my head while Andrew fiddles with the wires for the millionth third time, when he yelps, drops his tools, and leaps away from the scene.

"What?" I ask, standing there holding this light that is half-way connected to house.

"I just got shocked!" he yelped some more.

"I swear I turned off the breaker!" I said.

And then...I can't quite remember what we did next...but we slowly realized that because of the auxiliary light sensor, the old lights wouldn't always turn on when the light switch was turned on. In a very "old school" fashion (which used to be "top of the line" technology; that's just how these things go), if you flipped the switch on once that would turn on the light sensor, so the lights wouldn't turn on but had the potential to turn on when the sensor said they could. If you flipped the switch off and then on again, that would override the sensor and the lights would default to being on (and to undo that, all you had to do was flip it off and on again and it would be on sensor mode again).

Anyway, these new lights were going to eliminate all that confusion.

We must have turned off the light switch to unhook the rest of the wires so we could put the lamp down (it's kind of heavy, honestly) and this time Andrew went down to the basement to mess with the breakers while I stayed up to tell him when the lights were truly off. He thought I was a bit of a dunce for not having tried that breaker in the first place. After all, it's labeled "garage lights": 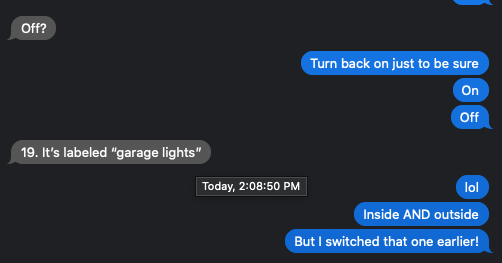 So I pointed out that I had "switched that one earlier." My evidence...only our conversation from an hour earlier when I told him the "one labeled garage is off" and he told me the lights were on.

Anyway, once we got the breaker situation actually figured out...and learned that the lights would only turn on in the middle of the day if their sensors were covered up...we realized that Andrew had connected the light correctly the very first time.
We had a pretty good laugh over ourselves (but only because Andrew's electrocution was so mild), and then I left to take a nap (did I mention that I'm pregnant; and I had gotten up with our early riser that morning while Andrew slept in?) while Rachel went outside to hold up the other lamp while her dad did the dangerous work (which was much less dangerous now that we'd actually cut the power).
Posted by Nancy at 12:39 AM