So many doctor appointments

Today it felt like going to the doctor was my full-time job, which I really shouldn't complain about because with Zoë and Alexander I had to go to the doctor once a week for the last half of my pregnancies and I've only just started going every week this week (the last month) of this pregnancy. But today I had an appointment in the morning that ran longer than I was expecting and then I had to take Miriam and Benjamin to their well-child visits this afternoon (and that appointment ran a little longer than we were expecting as well).

My appointment went fine. I simply didn't realize I had to do another non-stress test, so that was a surprise. The test is easy—as I mentioned before, I literally just lie there—but it does take time. The baby seems to be doing fine, but the doctor noticed that I had quite a few contractions while I was lying there.

"Do you feel those?" she asked.

Sometimes they're so strong I have to breathe through them and—my kids can attest—they really wear down my patience. I'm, like, not a very patient person right now.

"And how often do they happen?"

"Oh, off and on all day and all night. They're strong enough that they wake me up sometimes now, but...again...I don't think they're real yet."

"So no wonder you don't ever recognize labour..." the doctor mused while doing my cervical examination. She was a little surprised that I wasn't dilated or effaced at all.

The doctor was a little surprised that I wasn't dilated or effaced at all.

I wasn't surprised about at all, mind you, because the number of times I've been told by a doctor that I've been dilated or effaced prior to, you know, being in active labour, is precisely zero times.

This doctor even uttered the same fateful phrase my OB/GYN with Rachel said a day or two before I gave birth to her: "No dilation, no effacement. I will definitely see you next week."

Only in this case, I'm hoping the doctor is right because 37 weeks is the goal. But in Rachel's case the doctor was very wrong and only barely managed to get in the room in time to catch her. Hopefully I'll figure out when I'm actually in labour. But not recognizing labour is kind of my brand (and the intense Braxton Hicks contractions I have for months prior to delivery is why).

My uterus just likes to work out. Or something.

Anyway, after the non-stress test, a group B strep test, and a cervical exam, I also had to get another blood panel done (which went a lot smoother than the last time).

On the way home I'd plan to stop at CVS for my flu vaccine because I hadn't gotten one yet. There's a CVS very close to my doctor's office, but it's hard to get to after going to the doctor's office because you can't turn left on that road (and also turning left is horrible, anyway). So I looked at some maps online and saw that I could simply cut through a series of parking lots to make my way to CVS. Unfortunately, I found that the "street view" of the maps was a little outdated and a barrier had been constructed just on the border of the CVS parking lot so it wasn't possible to drive all the way there.

So I parked at different place and walked to the CVS and got my flu shot.

And then I went home, checked the work the kids had done while I was gone, helped them through some math problems, and started on lunch.

After lunch we headed to the pediatrician where Miriam was thrilled to learn that she's 4'11 and 3/4" so she only has a quarter inch to go before she hits 5 feet tall. And she's officially of average height for her age (in the past she's always been below average). She's hoping for a few good growth spurts over the next couple of years.

Benjamin is 4'5" so Miriam's got a good six inches on him now.

The kids are both doing well.

Like Rachel, Miriam had some blood pressure issues (stemming from nervousness) and they had to take her blood pressure three times to get a good reading (twice before the visit and once after when she was less anxious). But then she got her vaccinations (flu and HPV) and because of the potential side effect of dizziness and/or fainting with the HPV vaccine, she had to rest for fifteen minutes before we were allowed to leave. But then when the nurse came to check on us and asked Miriam to sit up, Miriam tried—but failed—to do so, announcing, "Wow, I'm dizzy!" Apparently that's a fairly normal reaction, but it did add more time onto our already lengthy doctor day.

Benjamin also had a little bit of a reaction to his vaccine (Pfizer):

He's a teensy bit excited to be on the path toward formally reentering society.

Here he is flashing his vaccination card while Miriam reposes in the background: 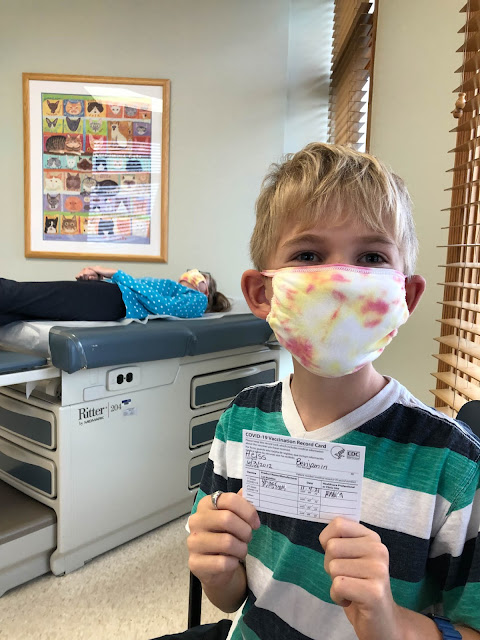 So far he hasn't had any reaction to either of the shots he got today (flu or COVID). Meanwhile, I'm feeling pretty crummy from my flu shot and Miriam was feeling woozy from her HPV vaccine. But, look! The nurse helped Miriam into a sitting position (and took her blood pressure a fourth time). 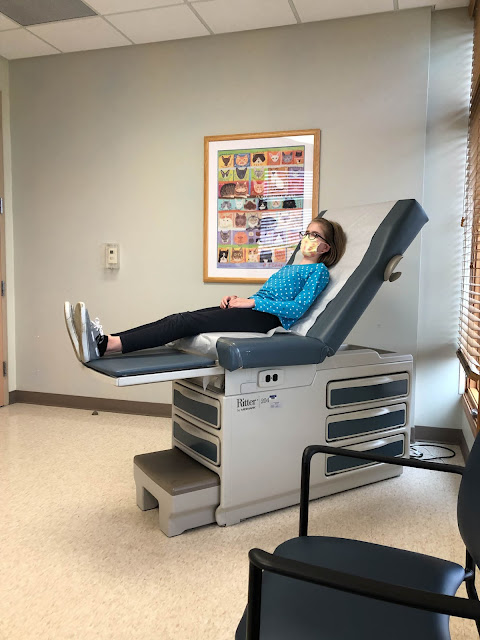 Benjamin had wanted to go to the park on the way home (as Rachel, Alexander, and Zoë got to do), but because Miriam and I both weren't feeling great and because it had been cold and rainy all day long (though at that exact moment it wasn't raining, he pointed out), we decided to skip the park for today.
We'll hit it another time on a less icky day.
For now we're happy to be healthy (even if feeling icky) and that we have access to medical care...even if the medical "system" down here makes me want to tear my hair out.
Seriously.
In addition to spending four hours at doctor appointments today (yes, four), I spent the entirety of Monday morning trying to pay the rest of our (future) hospital bill. I had already made a payment in October and now I just wanted to pay the second half prior to deliver (as is hospital policy). It took me all morning. It was ridiculous.
I kept getting transferred from superior to superior until I was possibly talking to the head of the hospital (just kidding; it didn't go that far).
The issue was that they weren't sure whether to finish billing me as a "potential" delivery, "active" delivery, or "past" delivery patient. Due to being admitted overnight for our little scare mid-October, my records had been changed from potential to active but hadn't been changed after that so they didn't know if I was still at the hospital or what.
They were like, "Is this call coming from inside the house hospital?"
I think they really should have sorted out that I wasn't in any of their hospital beds by this point in history (two weeks after I was discharged), but evidently I had to walk them through that process.
"I have a financial contract in my hands."
"There's no account under your name."
"I hope there's an account under my name because I already paid hundreds of dollars to you...using this account number..."
"Well, I don't know what to tell you because there's nothing that's coming up for you."
"Can I speak to your supervisor?"
*hold music*
"Yes, but see, I have my financial contract in my hands. This is the only account number I have."
"Who signed your form?"
"[This person.]"
"Oh...that's me."
"Then perhaps you can tell me what's going on."
"Let me ask my supervisor..."
*hold music*
It was a long morning, but I finally managed to make the hospital let me give them money.
And I finished paying my doctor (because we have to pay the hospital and the doctor separately, of course) today. So by now I think we've met our deductible (though according to my account online we haven't, but that's only because we technically haven't been billed by the hospital yet since...I'm still pregnant) and our out-of-pocket maximum (because those are two different things for whatever reason) and it should be smooth sailing from on out.
Though I'm not really excited about the idea of pushing yet another human out of my body.
I mentioned this to Andrew the other night.
"I'm so tired of being pregnant," I moaned. "I just want this pregnancy to be over! But I don't want to have to push this baby out."
"You can't have it both ways," he began to expound, waxing a little too professorial (i.e. he used his PhD voice). "Since B is contingent on A, you must experience B in order to achieve A."
"I can want whatever I want to want!" I snapped back (constant contractions make me grumpy). "That doesn't mean I'm going to get what I want. And just because I don't want to do something doesn't nullify the heroic effort that thing might take. I mean, even Jesus didn't want to atone for our sins. If He can ask for the cup to pass from Him in spite of knowing He'd have to drink from it, I can want to not be pregnant anymore and not want to have to birth a baby. I'll still do it. I just don't want to. And I don't think that makes the act any less meaningful."
Perhaps that example was a bit of a theologic (heretical?) stretch.
But also perhaps not. Am I not also acting as a bridge between heaven and earth?
Not that birthing a baby really compares to the atonement, but I think my point still stands.
Anyway, Andrew just laughed at me and told me not to have a baby that evening.
I get that a lot (like I said, we're trying to make it to 37 weeks—which is only a week away—and then a couple days more until our backup services (i.e. Grandpa) arrives). In fact, at the dinner table the other night, Andrew again asked me not to have a baby today and Alexander, who no longer sits beside me at the dinner table (he sits beside Andrew now) mimed a pushing motion towards me and offered a little, "Shove! Shove!" in solidarity.
Posted by Nancy at 10:20 PM