Paradoxical Glory is now a physical book! My first copy (with some embarrassing errors that were fixed before any other copies shipped, thank goodness) arrived yesterday, the day my book was launched (though technically people started purchasing it the day before). I think it's beautiful (but I'm scared to have people read it). 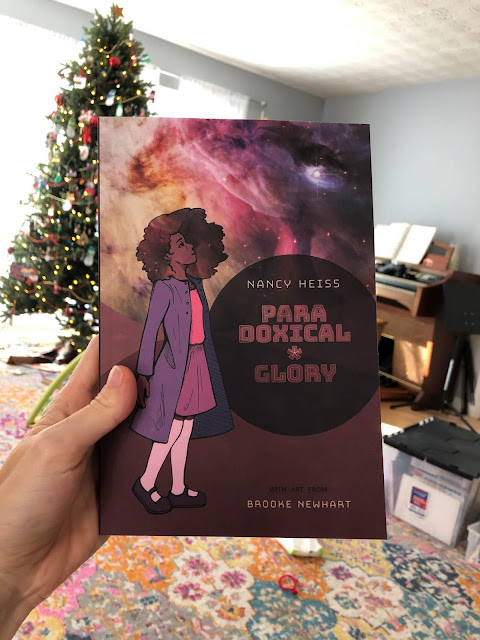 It was fun to watch the sales on Amazon yesterday; I don't have numbers, exactly, but I did rank 103rd best seller in the poetry books section, so that was fun for a minute! It didn't last though (and I didn't expect it to); I'm down in the 200s now. It was beautiful to have so many people express their support for my project, especially my mom! She should have been on my marketing team!
Rachel read through my manuscript before it was finished and she enjoyed it.
Miriam was the first one to gobble it up when it arrived in all its paperback glory: 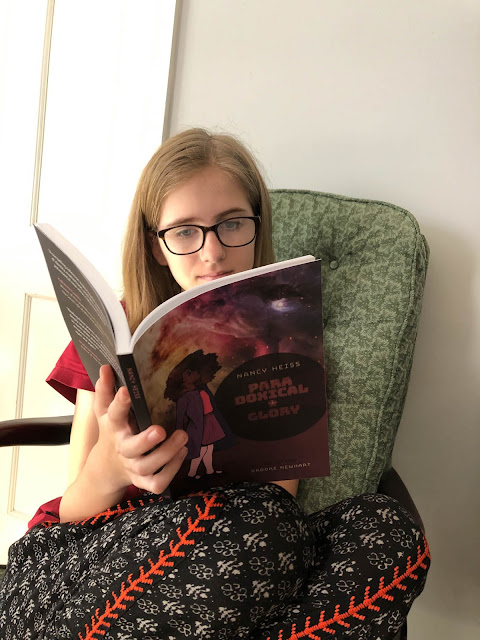 She also left me my first review on Goodreads:
Benjamin started reading it next. He wanted to know if the first poem was a real poem because it was so short. Of course it's a real poem! As a side note, we're reading Piecing Me Together by Renée Watson and her first chapter is about as long as my first poem, so my poem is completely legitimate. 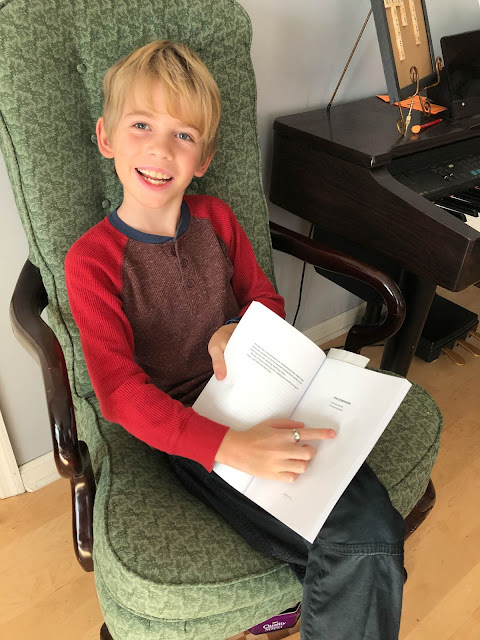 And I actually have no idea where the book ended up. It's somewhere, I'm sure. And I have a few more copies coming so I'm not too worried. There was a bit of a mix up with the title page (which Andrew doesn't design, though he did typeset the rest of the book); the title is supposed to be white on a grey background but the designer gave Andrew a version with black on a grey background. It's fixed for future shipments, which is good! So I might have to order another copy so that I have the correct title page...
So now I just wait for readers to read it, I guess. And hope that some people like some of what I wrote (because I don't expect everyone to write everything that I wrote).
*****
Currently I'm wrestling with myself about whether or not I can take a poetry class this semester. It's a class that I've wanted to take for a while, but it's not one that would be "required" for my degree, so I simply hadn't taken it yet. It sounds like a wonderful class and I've just been bouncing back and forth about whether or not I can handle it.
Part of me feels like if I don't take the class I will regret it forever. So I signed up to take it.
But then I felt overwhelmed by—oh, you know—a brand-new baby on top of a full course load last semester and I was just so tired that I decided I wouldn't take it.
But then Andrew was so lovely the past few weeks and just kept putting me to bed. I took so many naps and slept in so many times that I felt like perhaps I could take the course.
But then last night I was trying to put together my "course contract" (because it's kind of a self-developed curriculum; we "shop" for what we want to study and read) and I was having such a hard time planning everything I needed for the whole semester (researching poets, looking at their books, finding podcasts, etc.). I'm a really indecisive person so I didn't want to commit to something and then later change my mind! And Phoebe was up crying and spitting because she's just about two months old and is (hopefully) getting to the peak of her colicky stage.
She's not colicky like Zoë was, but evenings still seem to be a little hard for her. She seems to spit up more (because her silly parents keep trying to lay her down) and is a little more miserable than she typically is during the day when she has any number of peons to hold her. Andrew or I usually end up pacing with her for at least a few hours every evening.
But evenings have been our peak work hours!
This pandemic has meant we're both largely working from home while also having six kids home all day. The best time to get serious work done is after the little kids are all put to bed and that worked really well until...oh, mid-November.
Phoebe doesn't care about bedtime. So getting work accomplished in the evenings is more difficult.
Plus, overall, I'm just more tired than I was before (if that's even possible).
So I've talked myself out of taking the course...again.
But I can still read the books I intended to read and write the things I intended to write...on my own schedule. I think I can even join in on the lectures if I want to (well, the lectures for another class that this professor is teaching, which she invited our class to). And I think that will work out better for me...with my schedule the way it is this semester.
I'll just have a research methodology class, my research credits, the children's literature conference (which I'm helping coordinate), and homeschooling the kids while taking care of a newborn.
And that sounds like enough.
The poetry class can wait.
Posted by Nancy at 11:08 PM