Miriam decided to learn how to embroider a few months ago. Rachel and Andrew were quite swept up in cross-stitching, which Miriam tried as well, but she craved a little less rigidity, so she started with a blank canvas (a piece of material she found in our scraps-of-things) and began embroidering a phantasmagorical landscape. If my memory serves me correctly, she began this initial project around General Conference (so the first weekend of October...or was it April?) and finally finished it on Thursday night. 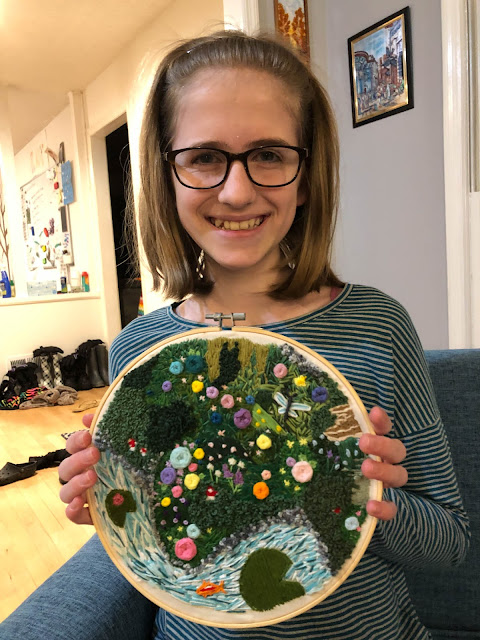 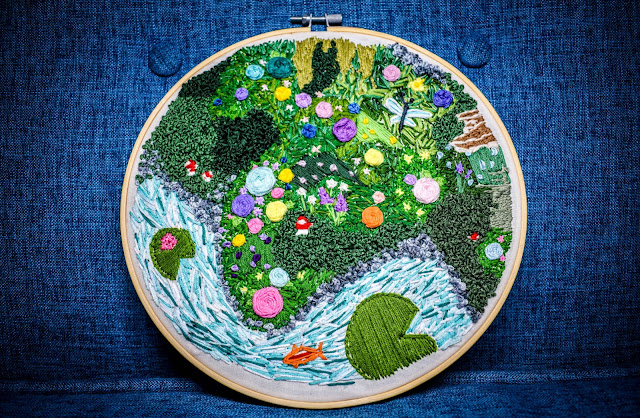 She learned all kinds of stitches (both from the internet and from a book we got her for her birthday), from French knots and satin stitch, to the lazy daisy and woven wheel stitch (and probably some others), and she worked everything together on the fly. 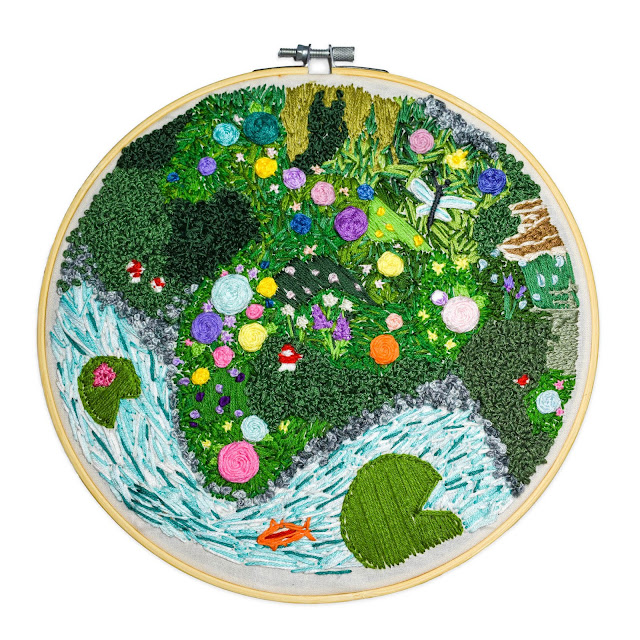 The detail and texture of the work is charming—when you look closely, it feels a little bit like falling into a storybook. 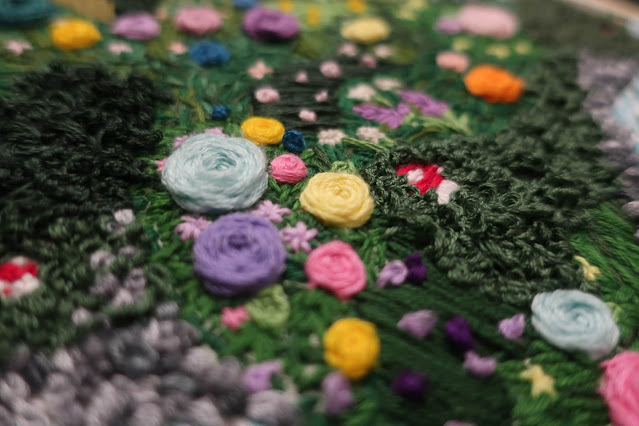 Here are a few more close-ups of her work: 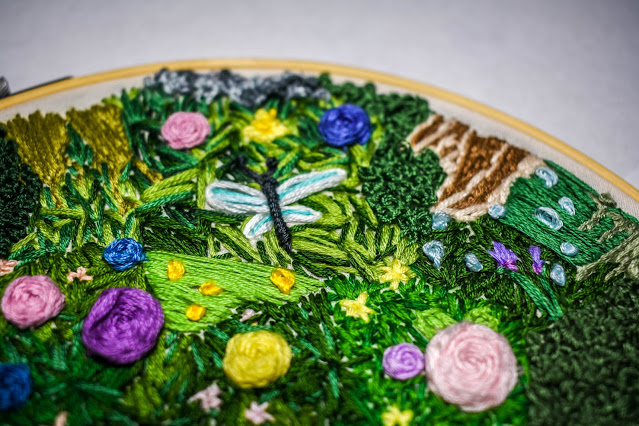 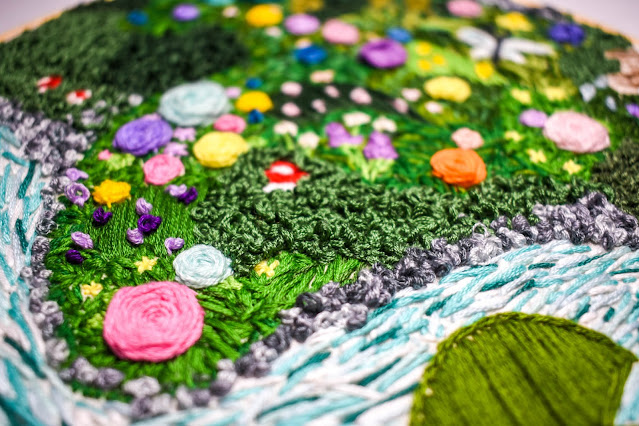 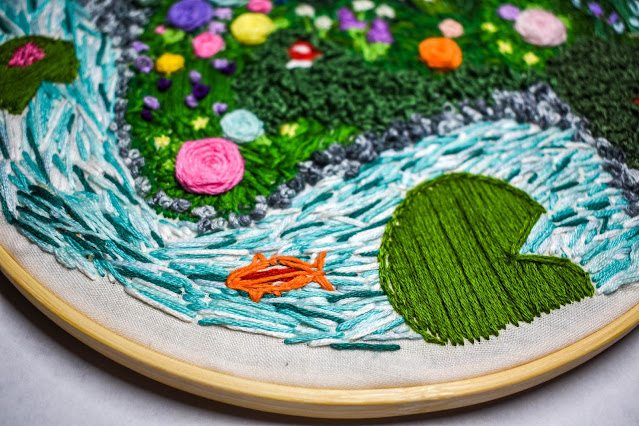 She's not the only one who has been hard at work creating things! Rachel's canvas tends to be a bit more...ephemeral...and edible...than Miriam's chosen medium.

Here's a cake Rachel made. We were hoping it would be a congratulatory cake but it ended up being a conciliatory cake, and that's okay, too! 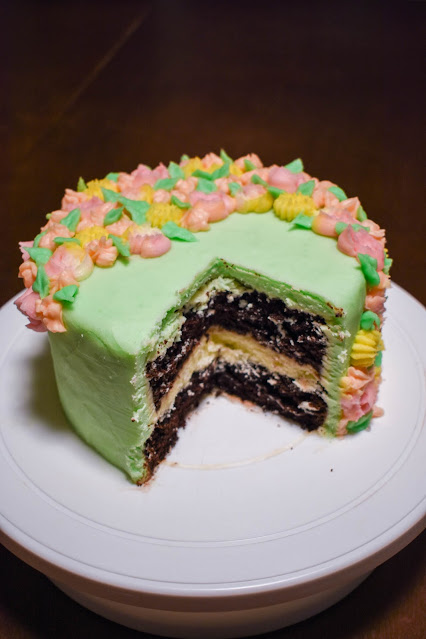 I didn't have any because, as you can see, it's chocolate. Mostly Rachel wanted to practice using her Russian piping tips (though no one quite seems to know why they're called Russian). Anyway, they're a little bit different from the standard Wilton tips and she had fun with this cake: 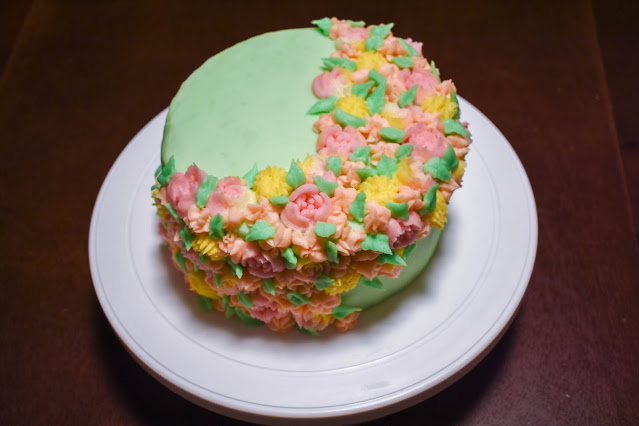 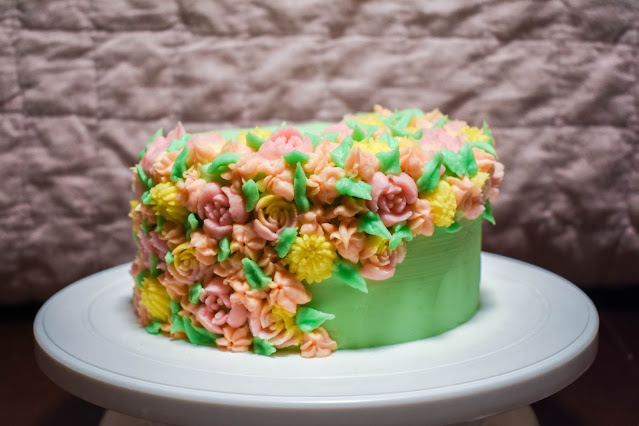 While we're showing off creations, I'll share some linocuts Benjamin and I made last Thursday. He made a goal this year to learn how to carve. He wants to learn how to whittle things, like actual carvings and stuff. I have no idea how to do that. And also, the idea of Benjamin with a sharp knife is a little terrifying.

I remember one year when my parents gave Patrick a big ol' hunting knife for his birthday? When we lived in High River? He would have only been in grade 4 or 5? Is my memory correct? Or was it David's knife and Patrick was only borrowing it? Either way, one of those boys got a big ol' knife and Patrick tried using it to whittle and was terribly upset when the knife "bit him."

And I can just see Benjamin getting bit, too. So I'm not ready for a great big knife.

Instead we're using little, tiny knives under close parental supervision. So, that's why last Thursday when Phoebe was miraculously sleeping (she's not doing that right now—she's screaming (Andrew's got her but she doesn't seem to care; she's still screaming)), I spent some time doing some linocuts with Benjamin (rather than homework or sleeping or whatever).

He plans to do a few more linocuts this year, and we'll probably have him do some soap carvings as well. And maybe eventually we're work on actual wood carving.

Anyway, he made the Master Sword from some Zelda game and I made a Carolina wren. 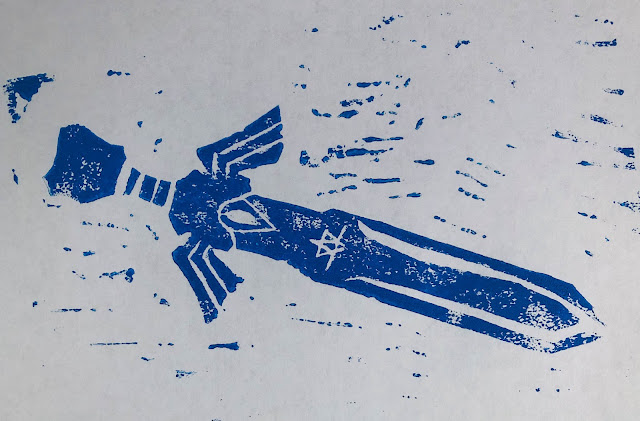 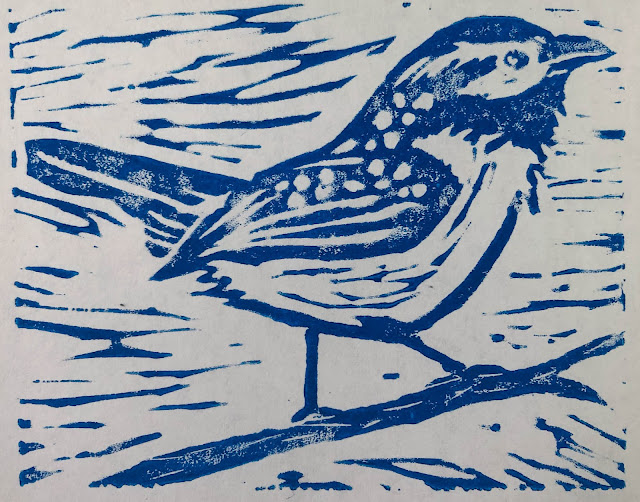 I don't really know if linocut art is really a gateway to actual woodcarving, but please don't tell Benjamin if it's not because we have him 100% convinced that it is and I'm 100% not ready to figure out how to otherwise support his desire to learn how to carve.
Posted by Nancy at 12:45 AM