Alexander had some very specific ideas about how New Year's Eve should be celebrated. He wanted sprinklers (sparklers) and spicy water (Martinelli's). All day long he was begging for sprinklers and spicy water. We (i.e. Andrew) had enough forethought to pick up some Martinelli's. We weren't sure about the sparkler situation, but fortunately Rachel recently reorganized the kitchen counters so she knew that we had some!

Our day was pretty low key and the evening followed suit.

We used up our stash of sparklers... 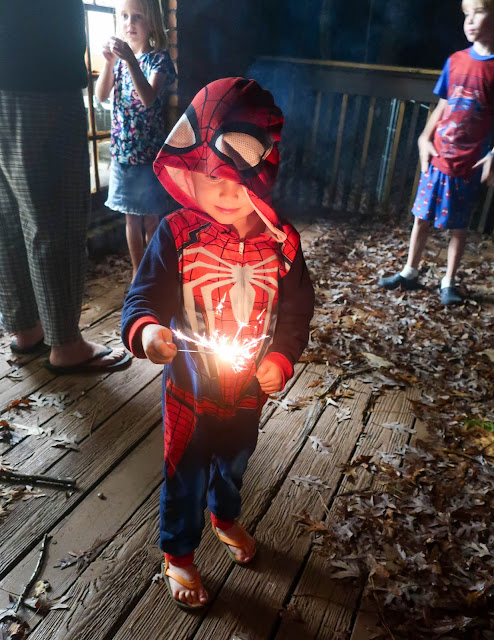 ...only narrowly avoiding tragedy. For whatever reason, when Alexander's sparkler burned out he reached up his little hand to touch it but everybody shouted for him to stop and, fortunately, he listened. 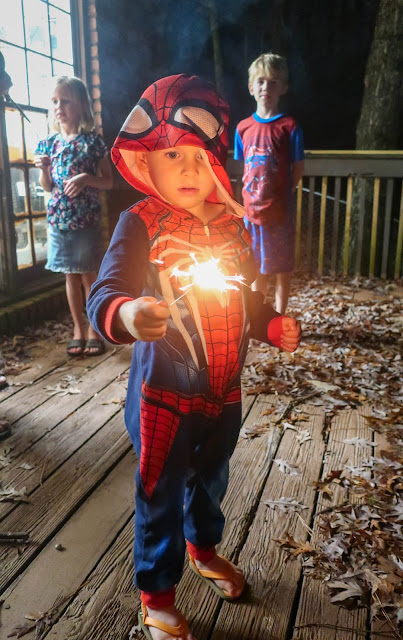 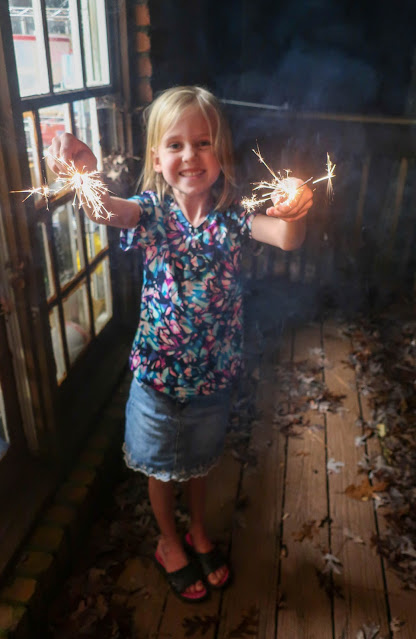 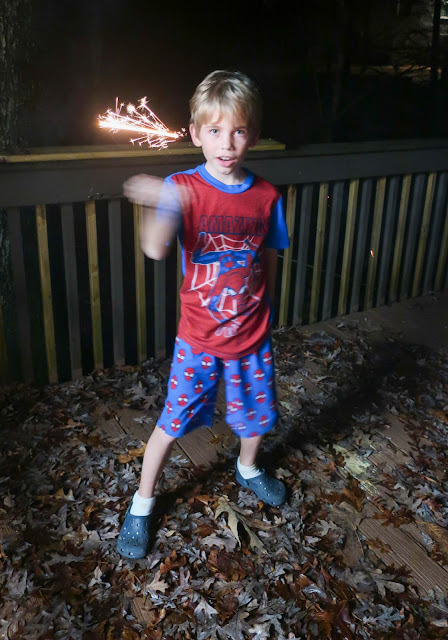 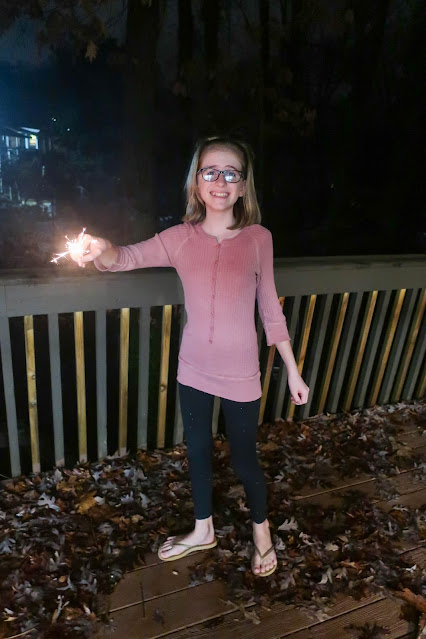 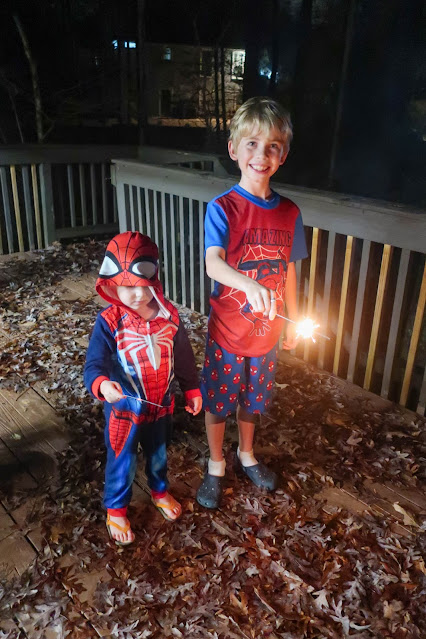 Here are Rachel and Miriam pretending to cast spells at each other: 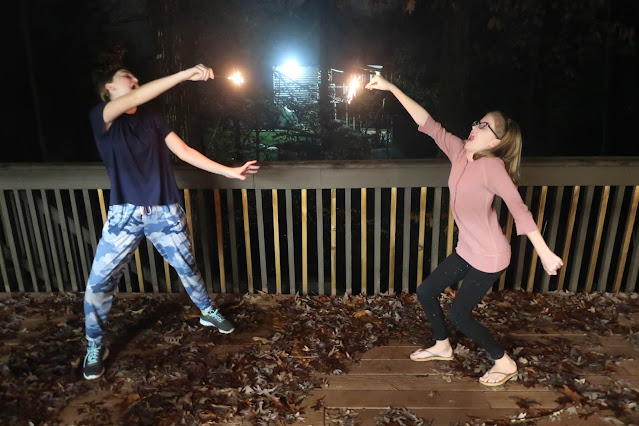 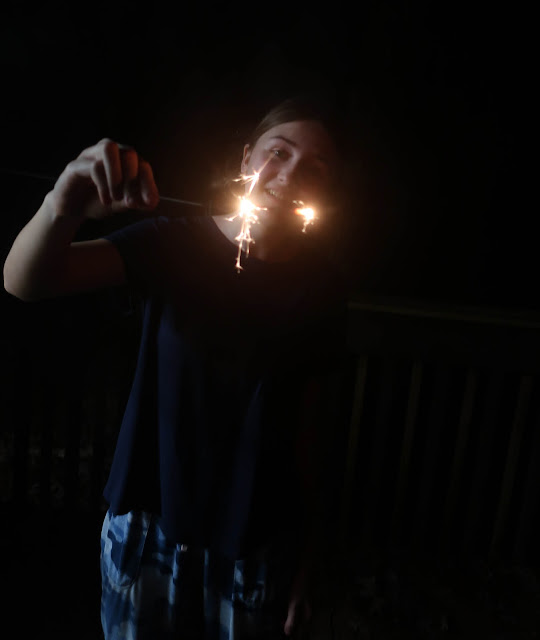 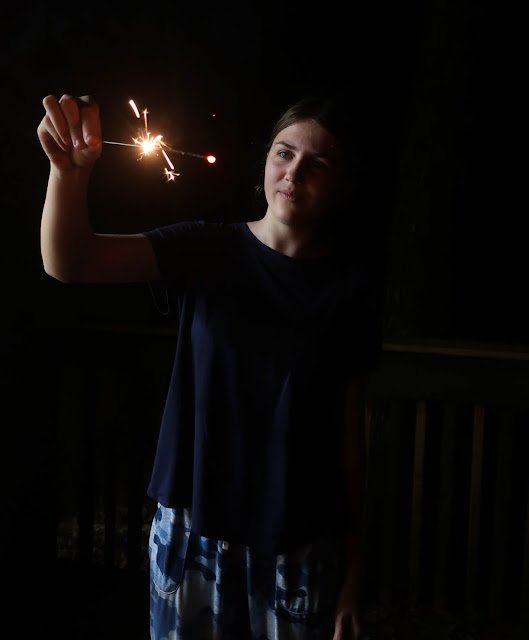 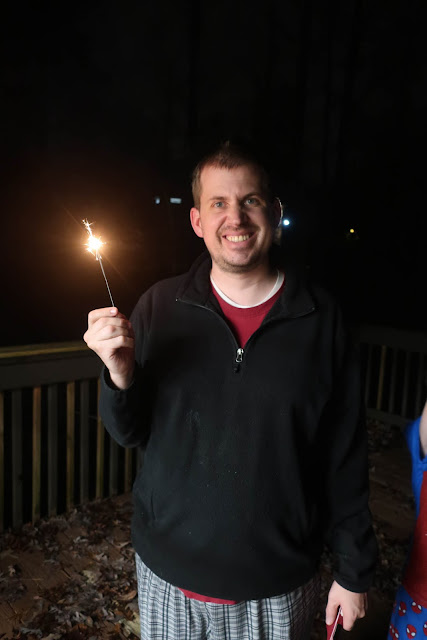 Even Phoebe got in on the action: 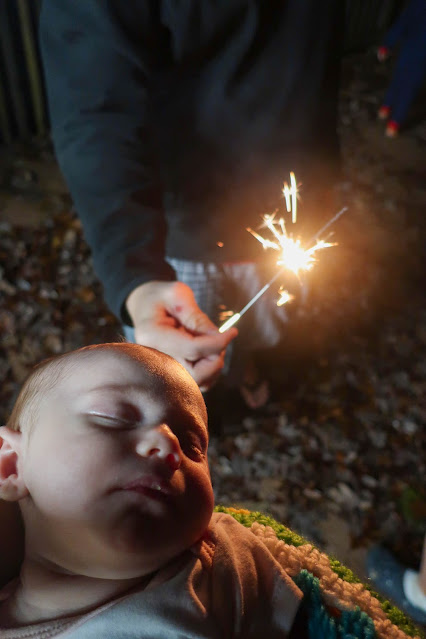 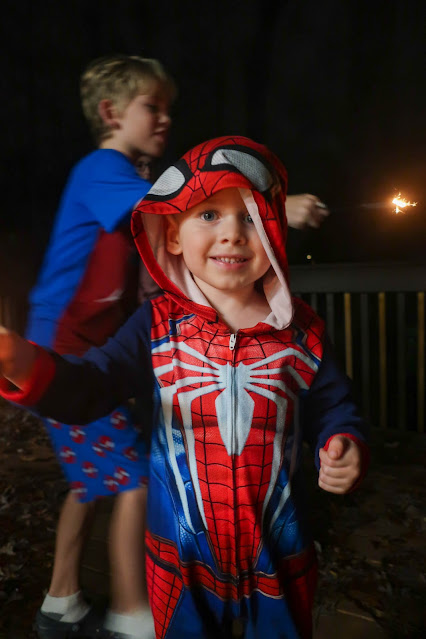 Benjamin and Alexander were super sweet in their matching Spiderman pyjamas: 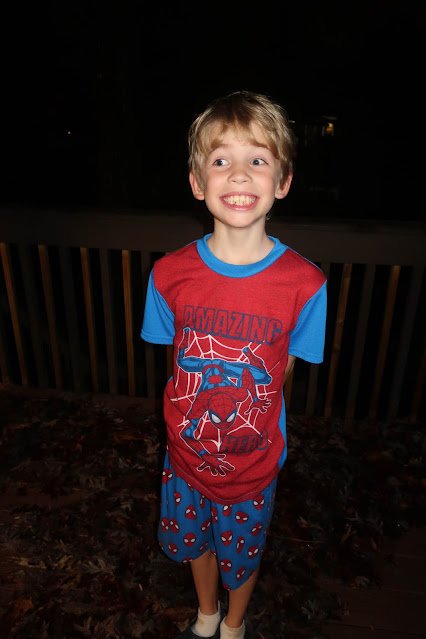 It's not often my boys end up in matching clothes, but every now and then they manage to coordinate: 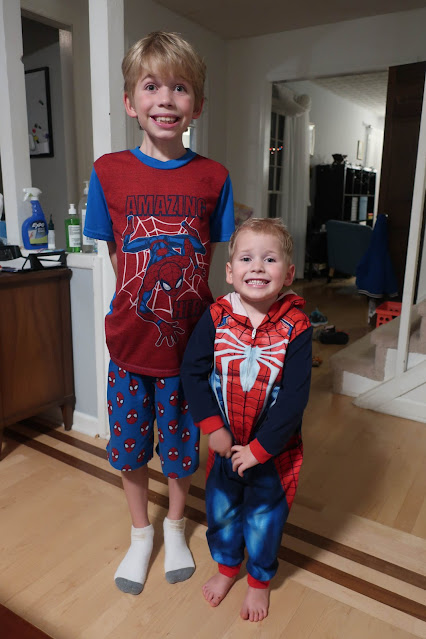 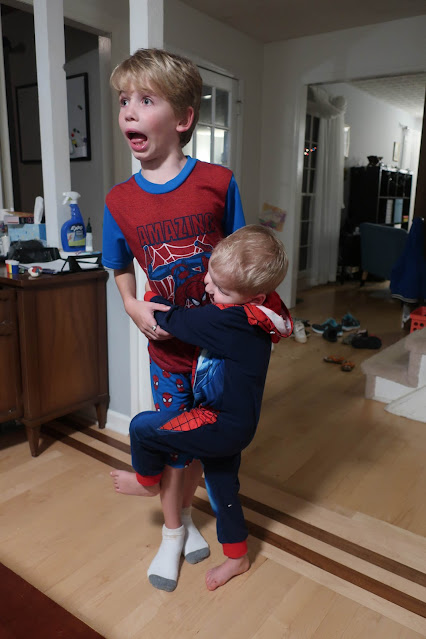 After sparklers (and watching random fireworks from our balcony), we watched a little countdown to the new year and rang it in...a little early. But fortunately for us, my family was available to send enthusiastic Happy New Year greetings so that the little kids felt they weren't being duped (when in reality...they were being duped). We also broke into the Martinelli's and discovered that someone (it was Alexander) who had been very excited for "spicy water" all day had shaken every single bottle. That made opening the bottles very exciting!

Andrew did what he could to minimize waste... 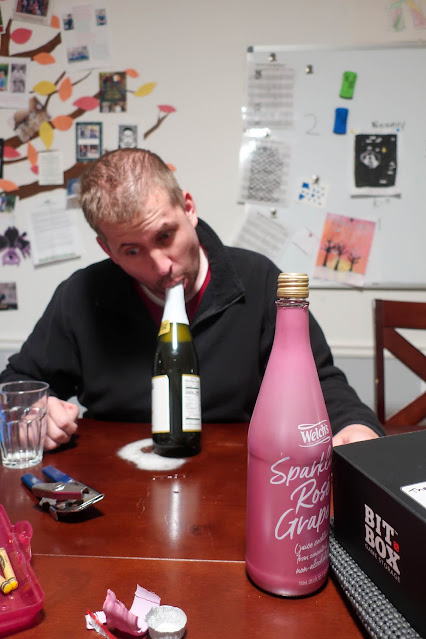 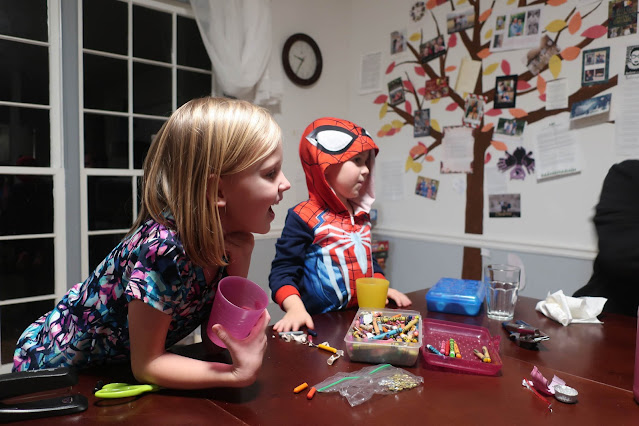 At first we thought it was, perhaps, a fluke with the first bottle, but the second bottle confirmed our suspicions that someone had shaken the bottles (and we're 99.9% positive that person was Alexander). 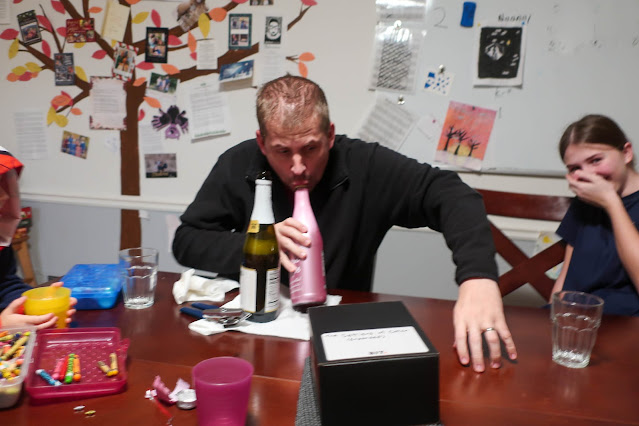 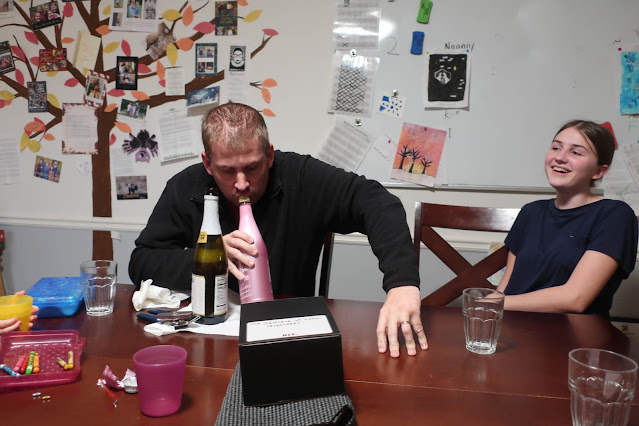 It gave everyone a good laugh, though, so it was alright. 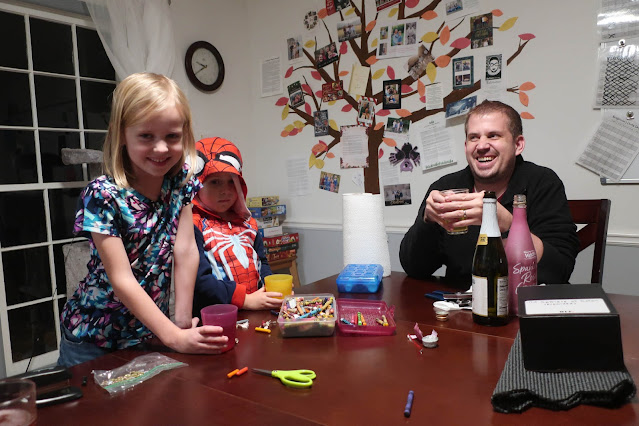 We tried to send Zoë and Alexander off to bed right after drinks, but somehow the talked us into playing a round of UNO first. 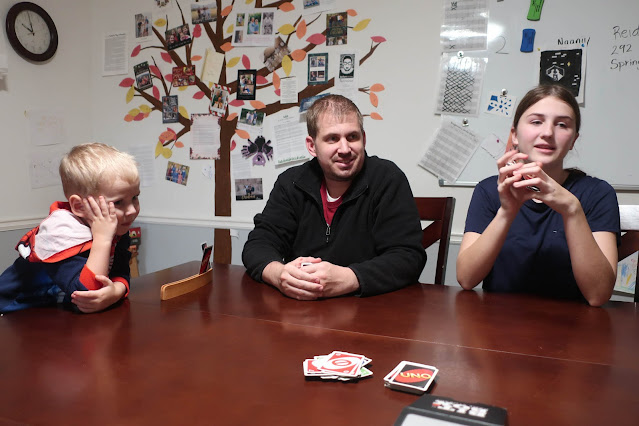 Once we got those younger two tucked in, we played a round of Hand and Foot with the older three; Benjamin smashed us! He's had quite a bit of beginner's luck lately. Like, we just taught him Settlers of Catan and I almost told him, "Don't be surprised if you lose because there's a lot to keep track of in this game..." but I didn't say that and it was a good thing because he totally won (though he lost the game we played before sparklers on NYE) and then he won at Hand and Foot as well! 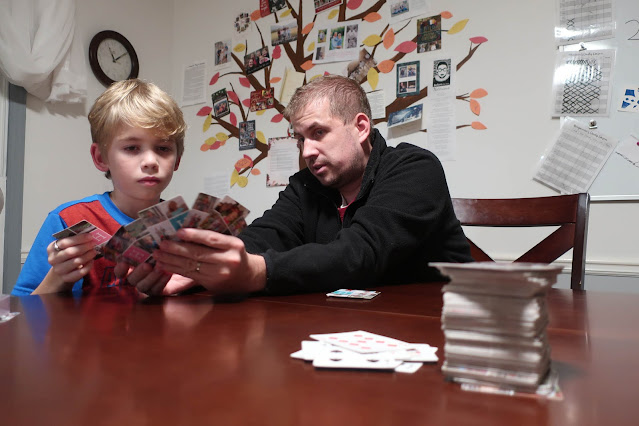 Phoebe was her regular chill baby self: 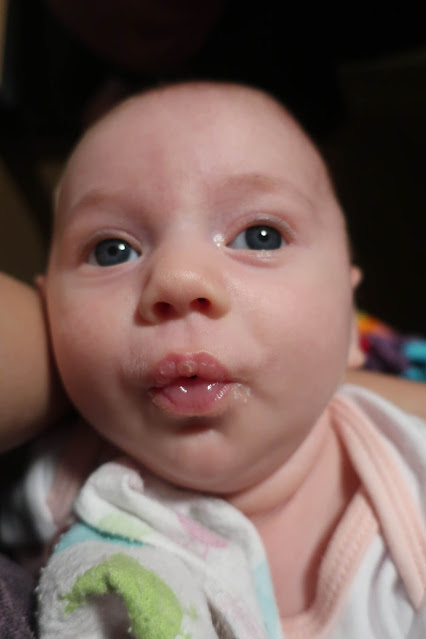