As I mentioned, snow was in the forecast for today, so naturally everything started announcing their closure yesterday. Church was cancelled by Saturday evening as well, even though we didn't see a snowflake until around 11:00 (right when we would have been getting out of church; though we're still just zooming into sacrament meeting). We have snow in the forecast for next weekend as well, so perhaps church will be cancelled then, too, and I'm glad about that because if we won't close for omicron, at least we'll close for snow.
According to the Federal Department of Transportation, "nearly 900 people are killed and nearly 76,000 people are injured in vehicle crashes during snowfall or sleet" every year! So it definitely makes sense to take precautions for ice and snow.
We're only experiencing, you know, 2000 deaths per day from COVID. We wouldn't want to close schools or churches for that. But snow? Yes. Definitely.
Now, I've lived in the south for a considerable amount of time—going on eight years, I think?—so I understand the feelings surrounding snow. They don't have the infrastructure to deal with it (though we had no snow accumulation on the roads, which means snow plows weren't required today, we're still worried about the possibility of black ice, which...I mean...fair enough...but northern places also get black ice...it's fine). I've learned to just smile, sit back, and relax while everyone else is losing their minds. So I'm totally fine that they cancelled church today, even though there wasn't yet a snowflake in sight.
I just wish I could get them to take, you know, other things seriously as well.
Anyway, with that rant out of the way, here are my sweet kids all dressed and ready for the snow: 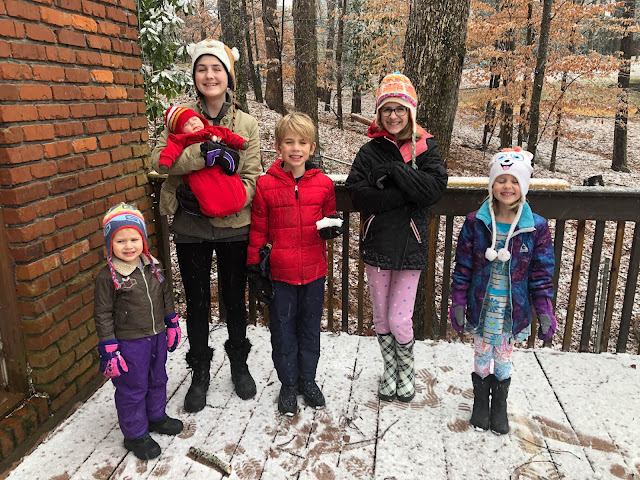 This is all that we got in the morning, which was kind of a disappointment. I love how our eclectic collection of snow gear so plainly tells the story of where we've lived and when. Miriam is wearing rain boots because there aren't any snow boots that fit her. But Benjamin is wearing the boots that fit Miriam when we lived in Utah. Alexander is wearing Zoë's snow pants from Utah. Zoë refused to wear Benjamin's old snow pants (because she wanted to wear her purple ones, which would have been much too small, though she did eventually put them on), and so forth...
I apologized to her, saying that if we lived in a place like Utah I would do my best to make sure she had snow gear that she liked every winter because she would need it and would use it frequently. But we live in Georgia where we don't need snow gear that often so we just have to use what we already have. I'm not shelling out hundreds of dollars for equipment we're only going to use once or twice a year (if we're lucky)!
Things could always be worse—she could be dressed in a grocery bag, like Phoebe was! 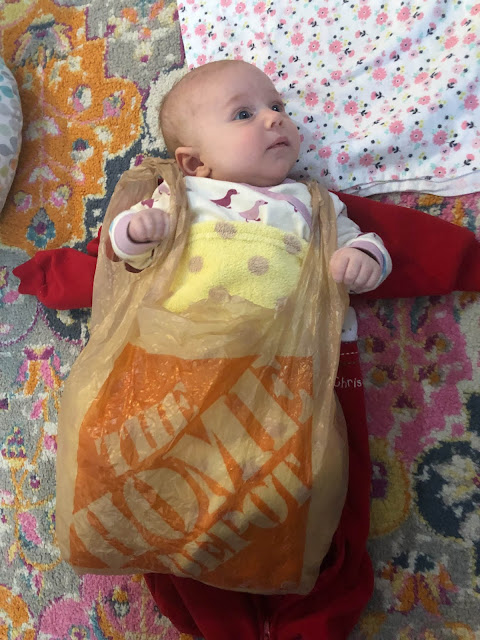 To be fair, I also did this with Utah-baby Alexander his first winter, and, honestly, it's mild compared to the snow pants I fashioned from grocery bags for Benjamin our snowiest year in Durham. I'm sure I did something similar for Zoë when she was a baby, too. Because southern babies don't need snowsuits.
Anyway, I'm including this picture because Zoë, who had not yet deigned to wear her brother's hand-me-down snow pants, is sticking out her sassy little tongue: 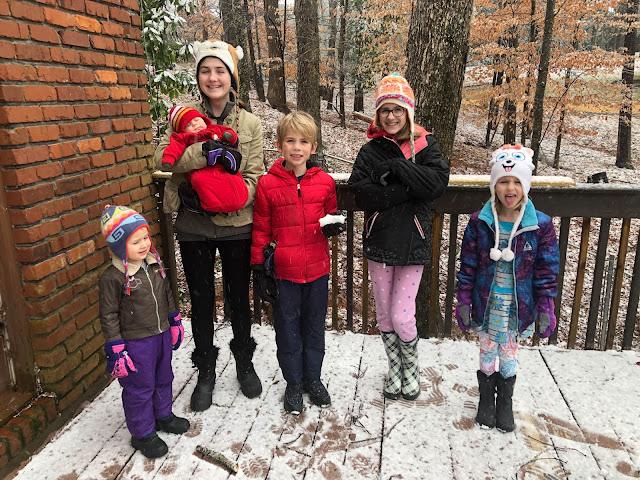 But we live in Georgia, where snow beggars can't be snow choosers! We take what we get and we don't throw a fit! So we dug right in and had a blast throwing snowballs and building tiny snowmen.
Here's a series of pictures of Benjamin and Alexander teaming up to blast Rachel with snowballs and then running away before she had the chance to get them back: 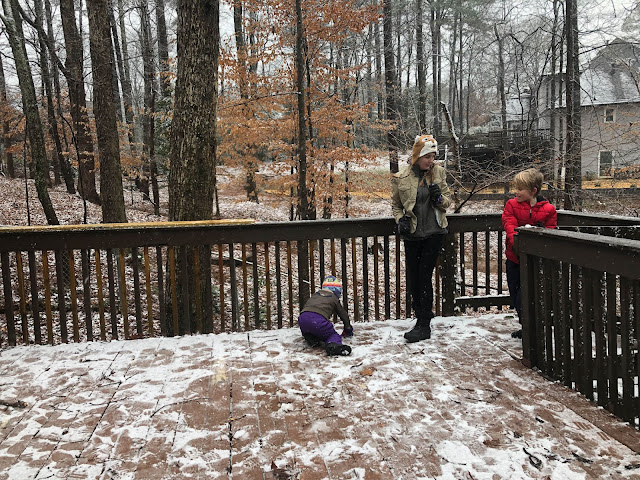 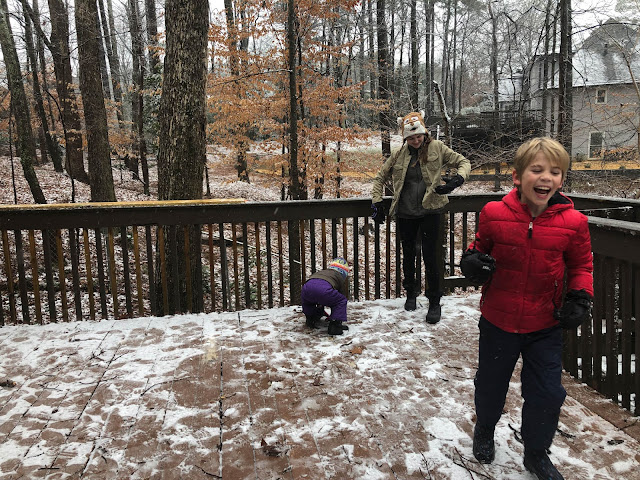 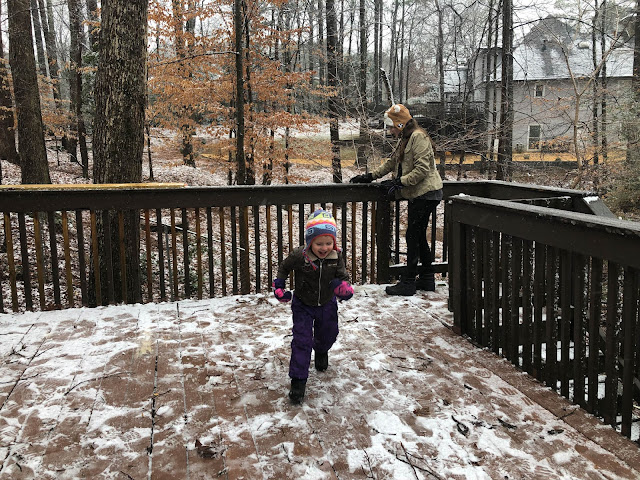 We also took a few minutes to acquaint Phoebe with to the snow: 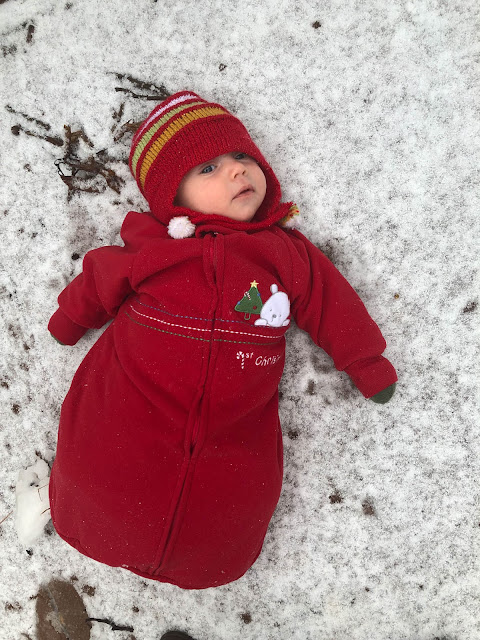 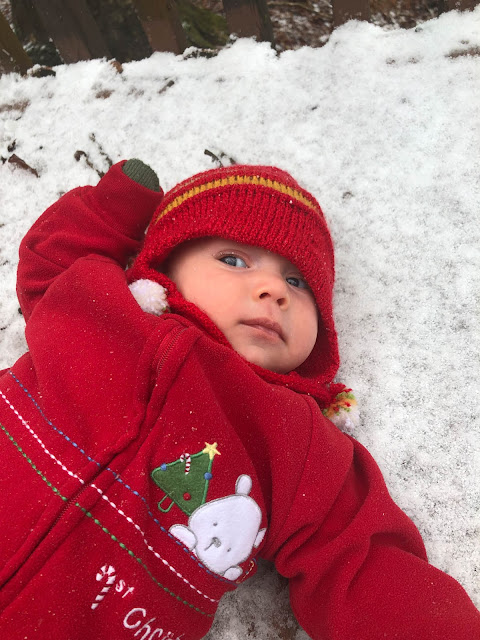 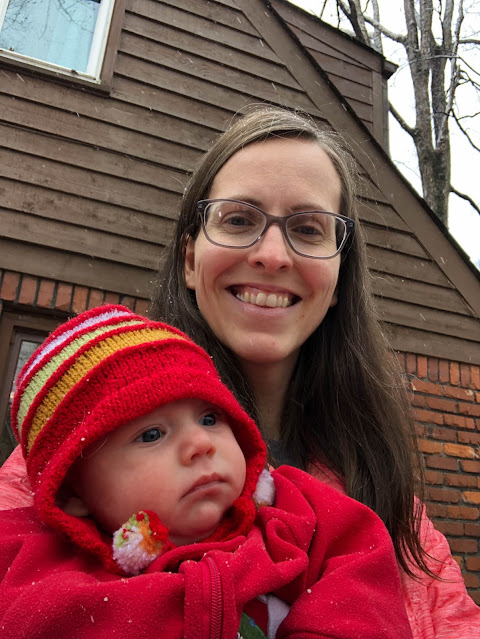 ...so I sent her inside to hang out with Daddy while the kids built a snowman. 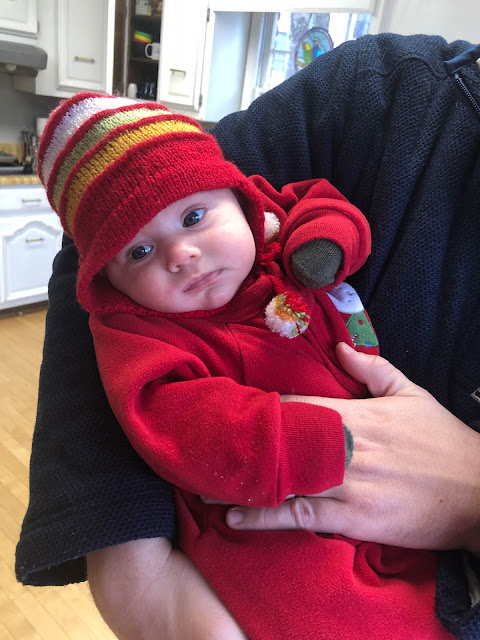 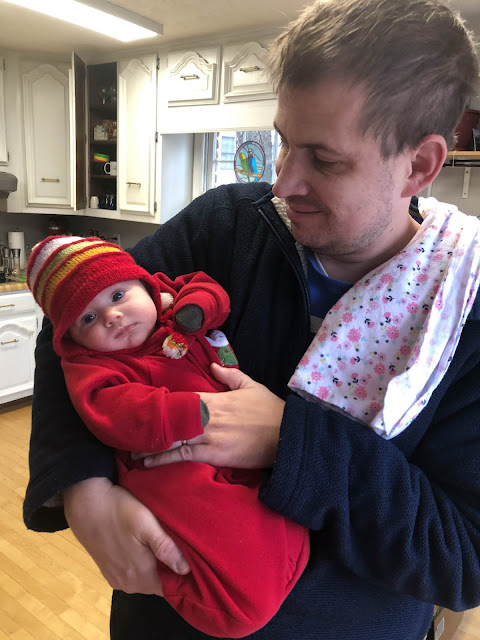 I love her little crookedy smile (she often only smiles with one side of her mouth at a time). 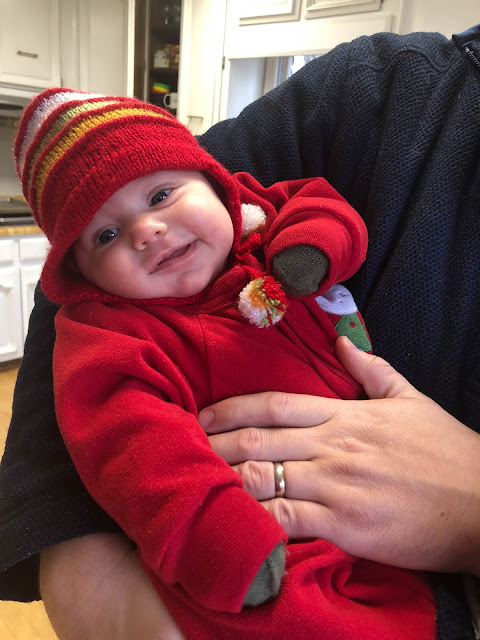 Once we'd built our tiny little snowman, I fetched Phoebe for another set of pictures. She was as unimpressed by the snowman as she had been with the snow. 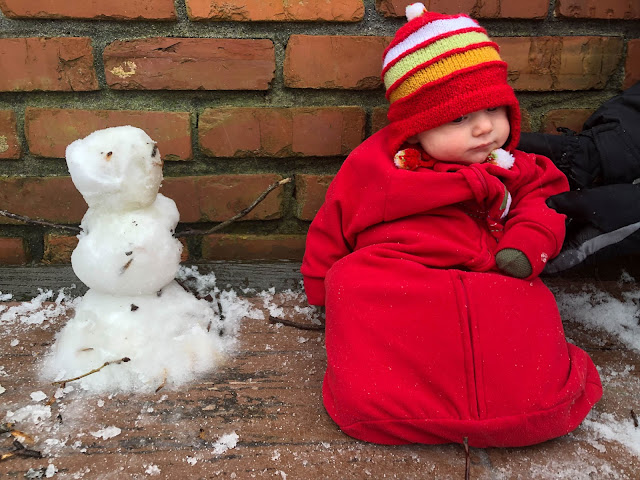 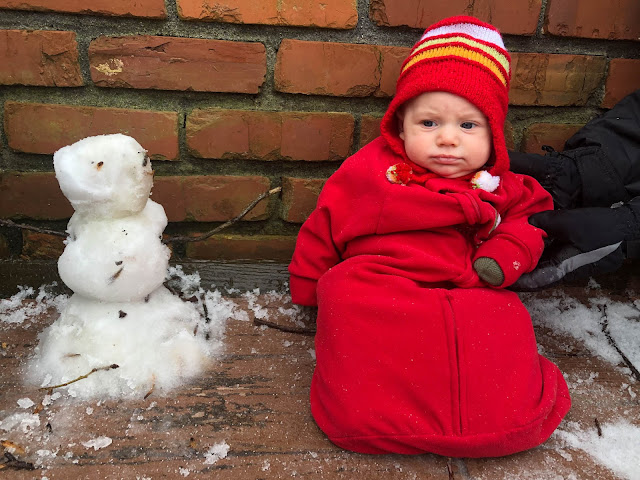 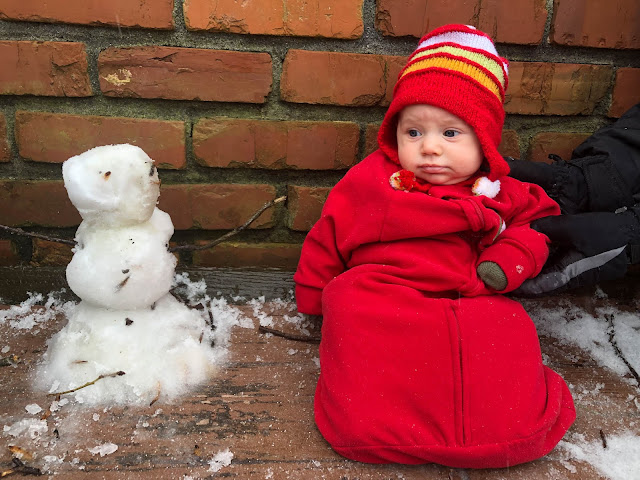 And that's hardly fair because compared to our last snowman, this snowman was ginormous! 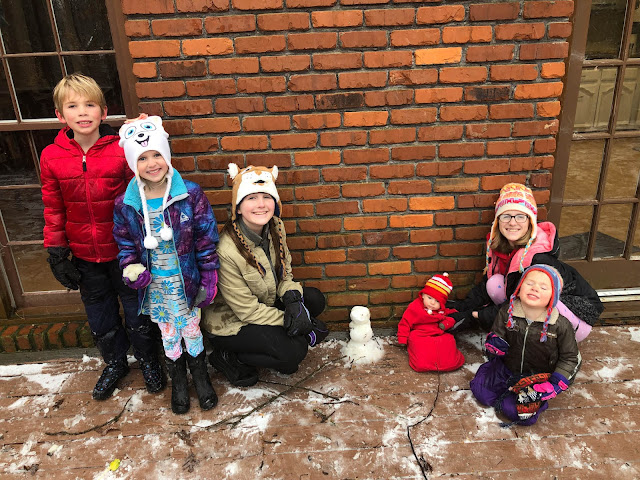 Luckily for us all, it snowed a little bit more while the kids were playing outside, so we were able to build a bigger snowman (notice that Zoë is now wearing snow pants): 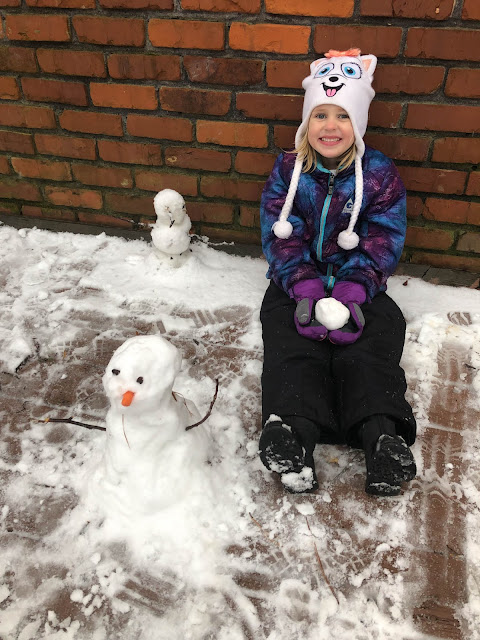 And then they came inside and had hot chocolate and lunch and general warming-up time, while it snowed even more! So we sent the kids back outside...after drying their snow things in the dryer.
Here's Zoë with a little branch that fell off one of our trees. There are little branches all over the yard! It was so windy last night! 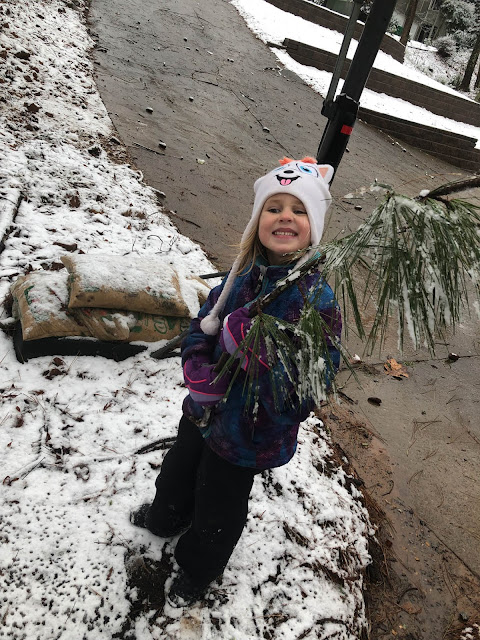 Phoebe was sleeping soundly, so I went outside and helped the kids build a truly gigantic snowman—the best snowman we've ever built in the south! 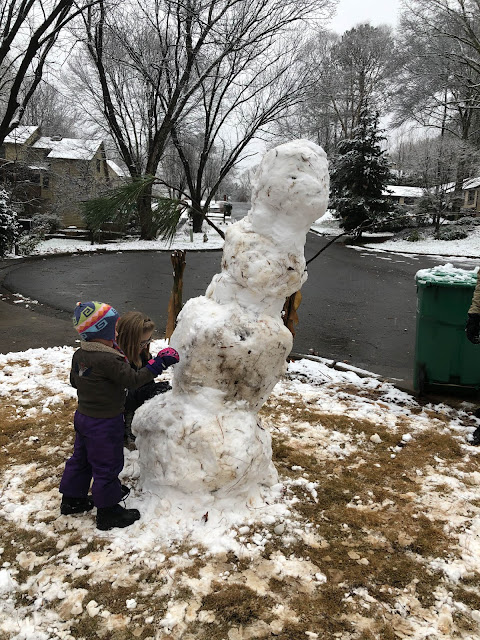 His name is Nigel. Nigel, le bonhomme de neige. Nigel, the neige-man. Get it? 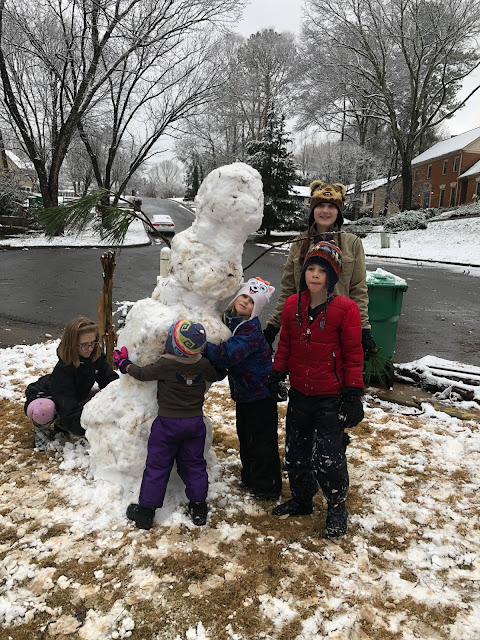 If he appears to be...leaning...that's because he is. Shortly after we took this photograph his top two snowballs fell off (Rachel tried to catch them, but ultimately failed). 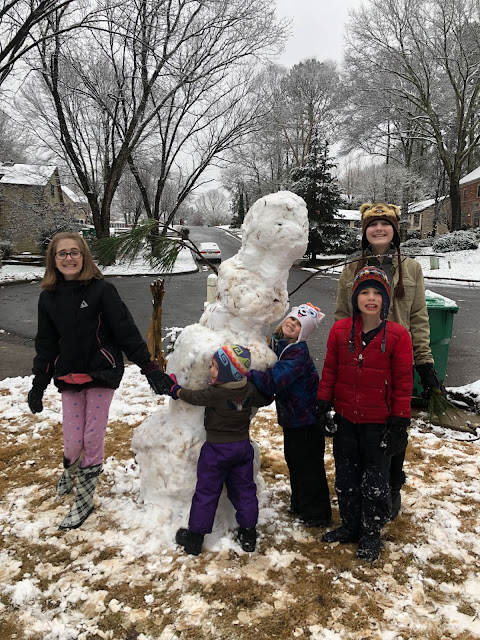 So Nigel (whose name ironically means black, even though he's made out of white snow), got a little bit of a makeover: 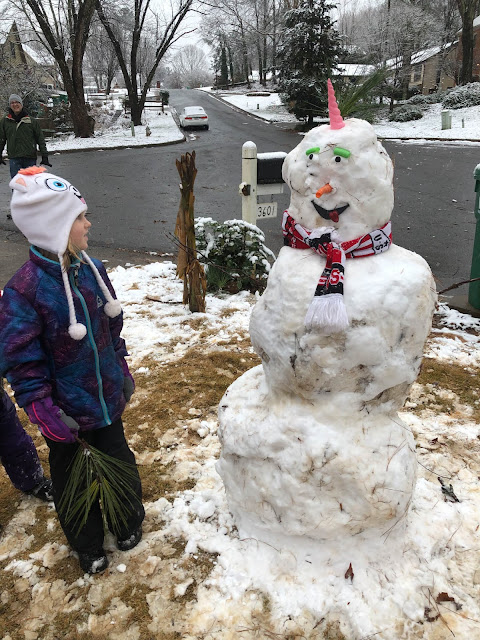 Getting that second snowball on top of the bottom snowball was quite the feat. Rachel and I rolled it up from the bottom tier of our yard (where we'd formed it while Benjamin made his gigantic snowball on the top tier), but then we couldn't lift it high enough to get it on top of the other. So, I knelt in the snow and we rolled it up onto my legs, and then I had Benjamin come and curl up beside the snowman and we rolled the ball from my legs onto his back and then worked together to hoist it up on the first snowball. The neighbours were looking at us like we were crazy people, but we got the job done!
Our neighbours had a little set of Halloween face parts for pumpkins...like Mr. Potato Head pieces, but for pumpkins...so they helped us make a face for Nigel. Zoë insisted we add the unicorn horn and we gave him a mane of pine needles (which ended up looking like a rather funky mohawk). All in all, I think we did a fabulous job.
By this time Phoebe had woken up from her nap, so Andrew bundled her up so she could be in the picture with our snowman, but she was not happy about this. The first item on her post-nap agenda was getting milk inside her belly, so this photo-op was really throwing off her afternoon! 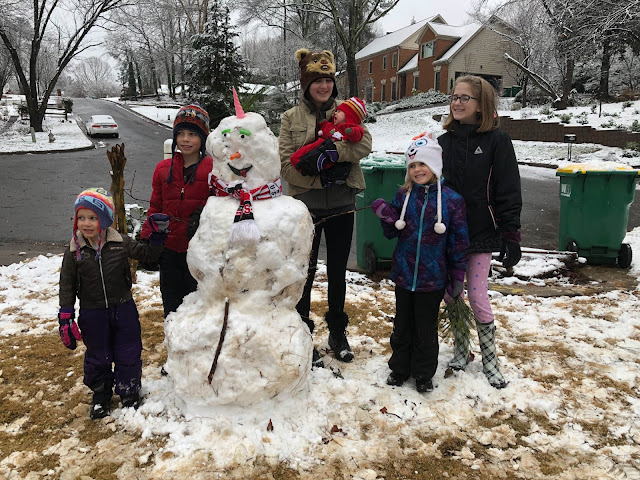 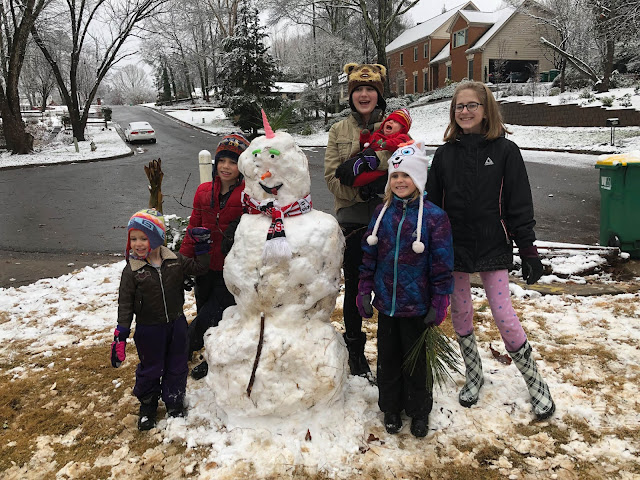 Unfortunately for Nigel, he soon started leaning again...and by the time Benjamin had finished taking out the recycling (our trash gets picked up on Mondays, but we don't know whether it will actually happen tomorrow since (a) is MLK day and (b) isn't snowy) he came in to report that Nigel had fallen over...but that he didn't touch him...which is hard to believe because knocking Nigel over seemed to be his #1 goal while we were outside. He kept karate chopping Nigel and throwing snowballs and sticks at him, so we're not sure we believe Benjamin's story. But it's possible that Nigel just tipped over on his own because the last time I checked he was leaning quite severely: 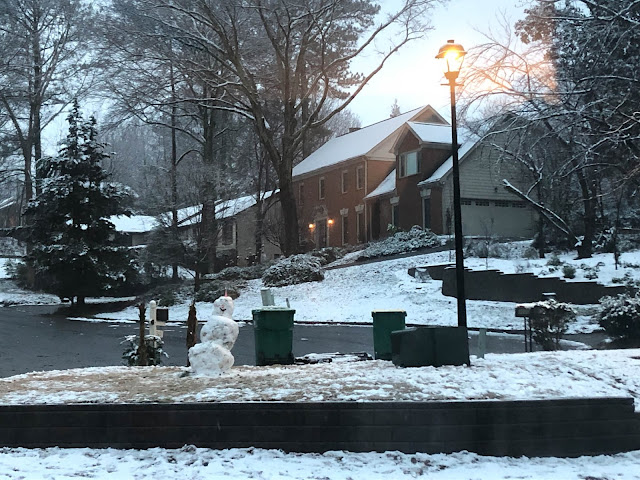 We'll see what other snow adventures we manage to get this winter! For now, this snow feels like a real treat!
Posted by Nancy at 12:13 AM