We took Phoebe in to have her hip ultrasound.

And then we went over to radiology to have her imaging done.

I have to say, everyone we talked to was super nice about everything. Whoever's doing the hiring over there is doing a great job. Everyone gushed over Phoebe and talked with such sincere, comforting voices. Like they all knew that no parent ever wants to be in the children's hospital with their precious babies.

We weren't even there for a very serious reason so I didn't really need their compassion, but it was lovely to witness them being so gentle with me and with everybody else. One child got met at the door with a literal welcome wagon (for them to ride in) and a therapy dog. I imagine that child was there for something much more scary than hip imaging.

Our ultrasound technician was super friendly and very gentle with Phoebe. Phoebe just slept through the whole process (if only she would sleep now). 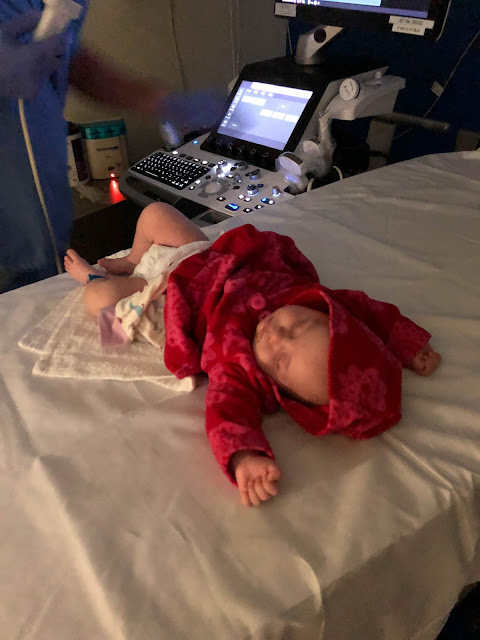 I had been concerned going in because I'm a bit of a rule-follower and when I made Phoebe's appointment the receptionist said, "We just ask that you bring a bottle in with you so she can comfort-feed during the procedure." And I didn't bring a bottle because Phoebe's not on a bottle.

I've never been very successful at bottle training my kids; they just wean straight to the cup.

But Phoebe didn't need to comfort-feed because she chose defense-sleeping instead. 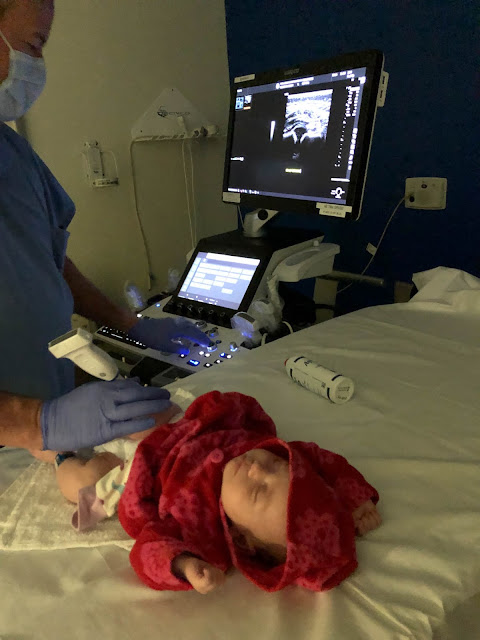 When the radiologist was finished, he asked us to stick around for a few minutes while he found a doctor to speak with. I was a little nervous about this, because we weren't supposed to get results until next week (the hospital gives the results to our doctor who communicates with us) and if he wanted to speak with a doctor right then, then surely this wasn't good news!
Fun fact: Not only am I a rule-follower, I'm also a chronic worrier.
When the radiologist came back he said, "I was just asking permission to tell you that Phoebe's hips look great. Hip dysplasia is a pretty black-and-white thing. Either it's there or it's not.* I didn't see any evidence of hip dysplasia and not only that, but you saw all the measurements I took, so we have quantitative measurements as well as just eyeballing it. Her hips are perfect."
He just didn't want us to spend all weekend worrying...and then maybe spend more time worrying...because sometimes doctors offices are slower to relay good news than they are with bad news. So that was lovely news to hear!
We packed Phoebe up and trekked back to our car. We ended up walking over two miles when we could have parked right there (though we still don't know where the entrance to the car park is)!
* So I guess hips really don't lie.
Posted by Nancy at 1:05 AM

Email ThisBlogThis!Share to TwitterShare to FacebookShare to Pinterest
Labels: Phoebe, sickness and health