Miriam has been becoming more active in the kitchen. Last year she had a goal to cook dinner twice a month (I think) and she did well with that. It actually is really nice having more than one capable child around; whenever Andrew's had to stay late on campus or whatever he simply assigns one of the older girls to make dinner and *presto!* I don't have to worry about it.

That said, Miriam has decided she wants to step things up in the kitchen a little bit. Rather than making things like "spaghetti with canned sauce" and "cake mix cookies," Miriam wants to become a "from scratch" chef/baker. A noble pursuit!

She made cookies for New Year's Eve and asked me how to go about softening butter, so I instructed her on how to warm up butter in the microwave for around 15 seconds. You don't have to take the wrapper off or anything because it's not in there long enough to really melt; it just gets warmed up. If this idea seems scandalous to you, don't worry! I, too, was incredulous about this method until I made cookies at my friend Marian's house (in Durham) and she showed me that it worked perfectly well. I've been doing it ever since.

So Miriam popped a stick of butter in the microwave for 15 seconds and then made a lovely batch of cookies.

Miriam volunteered to make dinner. Soft pretzels were the big feature of what was otherwise a simple meal—we typically fix sandwiches using the pretzels as buns. She did great! She mixed the dough, gave shaped the pretzels, gave them a water bath, and popped them in the oven.

Then she went to melt some butter in the microwave so she could brush the pretzels butter and sprinkle some salt on them when they came out of the oven. She's had some microwave issues in the past, though, so when she yelped, "Oh, no!" Andrew and I both went running into the kitchen.

Miriam was coming apart at the seams and we could hardly understand what she was blubbering.

Having not understood most of what-all-else she said, Andrew went over to the microwave to investigate and found the entire inside of the microwave covered in melted butter.

"I don't know! I put it in just like normal but I wanted to melt it so I put it in for two minutes, but I think the microwave must have gone for twenty minutes by accident because that's really melted! I don't know what went wrong! I just..."

"You wanted to melt the butter," Andrew clarified.

"And you didn't put it in a dish?! What did you think would happen when it melted?!"

She didn't unwrap it either, but that's neither here nor there. Did she imagine it would stay—melted—inside the wrapper? She hasn't told us.

"I think the microwave did just what you told it to," I said. "You stopped it with one minute and eleven seconds left...so it must have only been there for 50 seconds or so, but..."

"You told me I could melt butter in the microwave!" Miriam sobbed. "We just did it last week!"

"I told you you could soften butter in the microwave. There's a big difference between softening and melting butter, though...as we've learned." 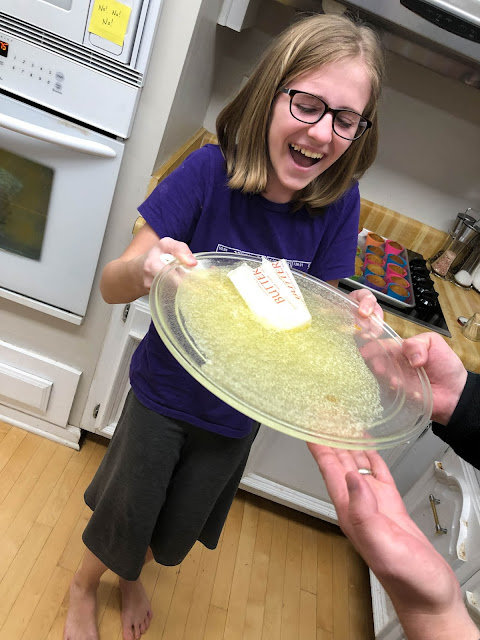 In addition to this lovely mess, I'm pretty sure it did one of those *popping* things that butter is wont to do when it melts in the microwave. Fortunately for Miriam, Andrew volunteered to clean up the mess for her while she finished up dinner (I was bouncing the baby so my hands were tied). She tends to get a little overwhelmed by all the emotional labour involved in coordinating all the parts of dinner, so this microwave mishap about sent her over the edge (which, I mean...I feel the same way about making dinner so I don't blame her).
We've been gently teasing her (and sharing our own disastrous cooking experiences) to help her get used to this story, as we're sure it will enter family lore. She's doing her best not to be too sensitive about it.
While I was pouring some water for myself, I asked her if I should put an ice cube in a dish if I wanted to melt it and drink it, or whether it would simply hold its ice cube shape for me as it liquified. She shot me a well-deserved withering look, but it's only been one day since her mishap and already she's starting to laugh about it herself. It helped that I joked about Jorts the Cat just before scripture study yesterday evening and she hadn't heard about Jorts yet, so we got to talk about that (and how you shouldn't butter cats).
I wonder how many cats we could have buttered with the mess that she made...
Posted by Nancy at 1:21 AM