Is it possible for 2022 to have been an emotional rollercoaster already?
We're only two weeks in and somehow it has been!
Getting my book published has definitely been a high. I wasn't expecting such a warm reception and though I'm certain not everyone loved it, I've been overwhelmed by the messages I've received from my readers so far. It feels like I've sat down and had a heart-to-heart with each one of them and it's really been very wonderful.
Today, however, we got some disappointing news (which I'll leave vaguely sitting here like that because it's Andrew's news, not mine, and I'm not sure how public he wants the news). But don't worry; we're fine. We're disappointed, but we're not distraught and that's a good place to be. I'm sure we'll get over this soon because we've suffered far worse disappointments before.
Anyway, today is January 13, which means Phoebe is two months old! 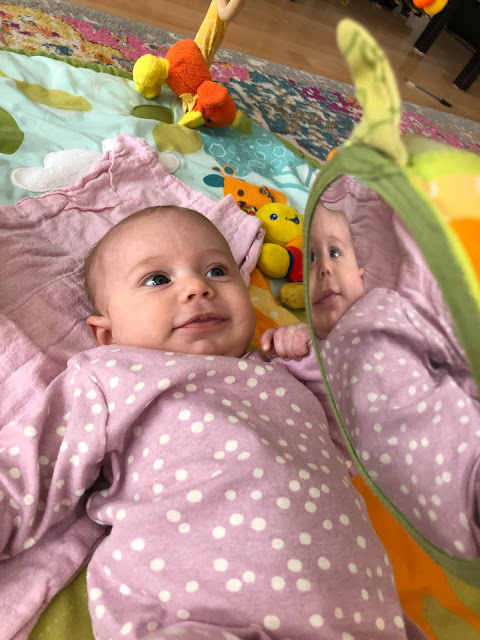 I have no idea how big she is right now, only that she's steadily growing. We'll have an official weigh-in soon. 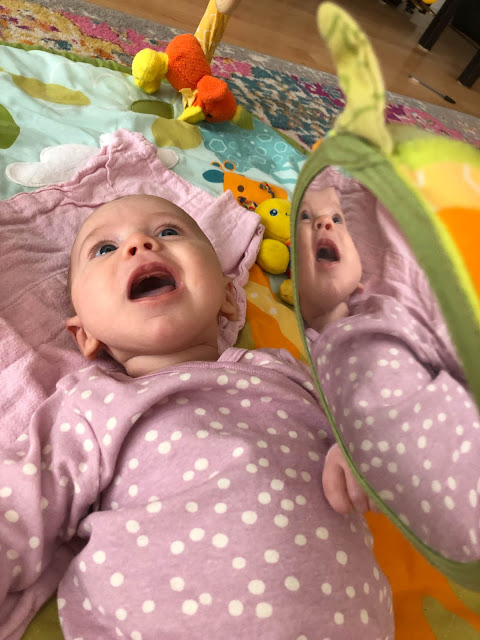 She's starting to be much more alert and curious about her world (rather than sleepy and disinterested), which is nice and not. There's not really any way to entertain her for a sustained period of time, so she's decided her hobby is simply commanding our attention. She thinks she should be held all the time.
Here she is taking a very squishy nap on Miriam, who was kindly walking her around the house to keep her from screaming: 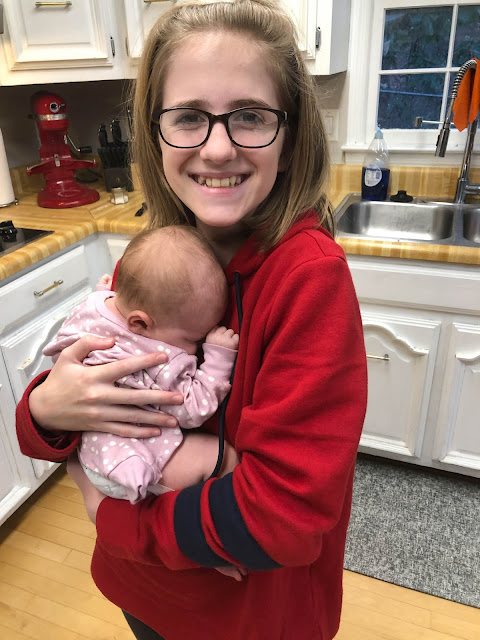 Her one hobby, aside from eating, and forcing people to walk laps with her, is shaking her play mat: 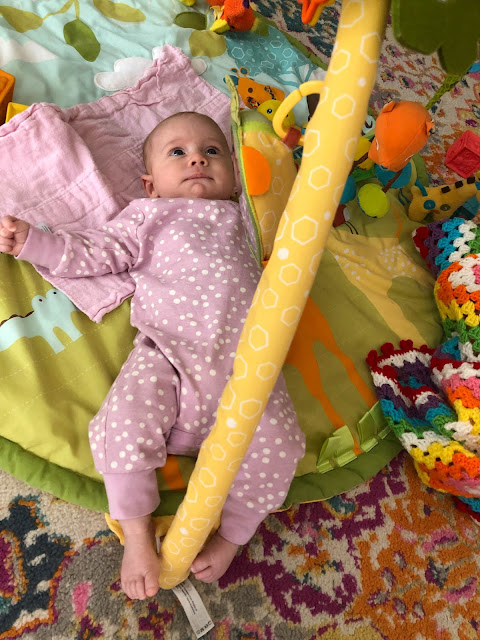 She has figured out that when she kicks the poles, all her toys dance for her. She seems to do this on purpose because if she somehow squirms enough that she finds herself misaligned with the pole, she will slow down her enthusiastic kicking to feel around for the pole so she can start kicking it again. And she seems to like watching the toys bounce. 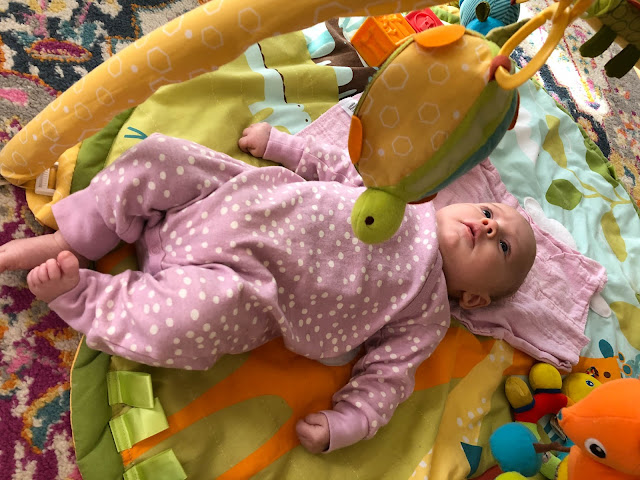 Benjamin has been counting down the days until she turns 90 days old because he learned/read/heard somewhere (probably a podcast; Brains On maybe?) that that's when babies begin to be entertained, that's when babies find things funny, that's when babies laugh. And Phoebe, he posits, will love him because he's hilarious.
"What? Like jokes?" Zoë asked.
"No. Like antics!" Benjamin said. "I have great antics!"
"Oh. Well...I didn't think she'd be able to understand jokes yet. So that makes sense. But...we just...be silly...and she'll like us?"
"That's what the science says!" 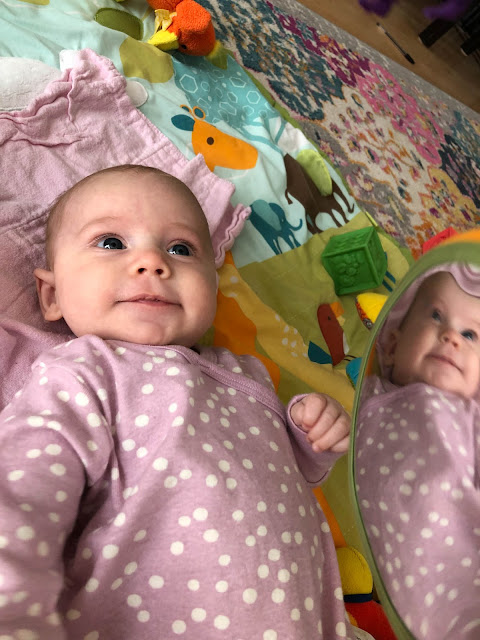 Alexander and Zoë put on an improvised play for us to celebrate Phoebe's two-month milestone. It wasn't too bad, as far as their plays go. And Zoë wrote the following narrative in her writing journal:

Phoebe has been in our family for 2 months. Today is her 2 month anerversy. She has done some good none-poop smiles. She has also done some good laughphs (how do you spell it?). And her eyes. Oh, her eyes! Her eyes are like marbles. Oh, her mouth is so tiny, so tiny it is!

Rachel baked a celebratory/conciliatory cake for Phoebe and Andrew (and my friend Tamsin's magazine, potentially). She wasn't sure whether we'd be celebrating or consoling Andrew, but she knew we could always celebrate Phoebe. We didn't have the cake because Andrew works late on Thursday nights (he just had dinner at 11:30 when he got home), so we'll do that tomorrow.
Here's Phoebe having a little snooze after kicking out all her energy on her play mat: 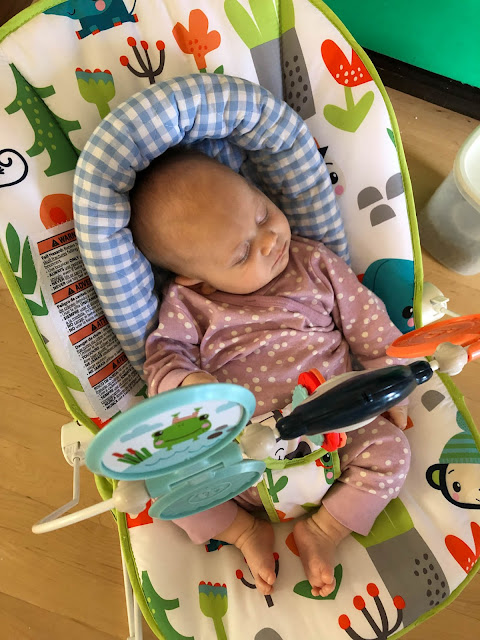 (These pictures are all from a few days ago (January 11), but they'll do for today. I didn't take very many pictures because Andrew left for campus before any of us got up and didn't come home until after all the kids were in bed, so it was a long day for...all of us.)
Posted by Nancy at 1:00 AM