If you happened to be terrified of bugs, alone in your room, in China, half-way around the world, at midnight and suddenly discovered that your room has become infested with cockroaches...what would you do?

Oddly enough, I know someone in that exact situation.

My dear cousin Elizabeth was "online" this morning. I've never seen her online ever before so I was like, "Oh, dear! Maybe she's home and I didn't even know it!" See, I just wrote her an email yesterday asking her all-things Chinese so if she was already home, I would have felt pretty silly.

Well, I got brave and talked to her. Here are the first few minutes of our conversation:

me: Are you home already?
9:44 AM* Elizabeth: No. But I will be back on June 25. How are you doing?
9:45 AM me: I'll have to remember that date.
I'm good. How are you?
9:46 AM Elizabeth: Hey, I kind of have a problem that I just discovered. My roomate here in China is really messy and now we have cockroaches. I don't know what to do. What to you suggest?
me: Well...
That is disgusting, first of all. I hate cockroaches.

Now, I have never technically "had" cockroaches, but I really don't like them all that much. We found one really big one, dead, under our table, in Jordan but that's the only one we ever saw, and we never noticed anything suggesting a cockroach problem, per se. The only other encounter with cockroaches (that I noticed) was at the cafe in Madaba that had cockroaches crawling on the walls. I was really hungry though, so I ignored them the best that I could and ate anyway.

The cockroach we found in our apartment 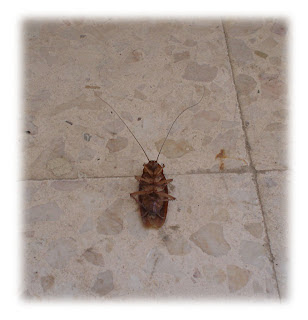 Anyway, here I am, now in a position to find a solution for my cousin. See, when it comes to bugs I'm a lot braver than she is (although I do make my husband do the bug-duty in our house).

One of my favorite memories of Elizabeth was when we were having a little family get-together at my Grandma's house in Raymond. Elizabeth's family had traveled all the way up from Utah, so we were all very excited to see them. Grandma had also made her fruit salad, making all the grandchildren even more excited.

We were sent to eat on the back porch while the grown-ups enjoyed the luxury of a bug-free dining room.

Most of us were fine with this because although the mosquito population in Southern Alberta is astronomical we were all pretty much used to them and could ignore them fairly well. Elizabeth, although born in Canada, had spent the majority of her life in Utah so she was a little less comfortable with the idea of a million mosquitoes flying around. In fact, she would scream and flail her arms every time she noticed one come near her (which meant that she spent most of dinner screaming and flailing her arms).

With that background, picture her now in a room full of what she described as "scratchy" sounds. Another girl in China came in, saw a cockroach and left post-haste. Elizabeth was once again alone, in her room, in China, with a whole bunch of big bugs.

What do you suggest for someone to do about cockroaches while they are in China and you are in the United States? After all, I've never been to China (although I would like to go) so have no idea what her situation is really like.

Boric acid is probably out since that is mined in California and I have no idea where she would get it in China.

Repellents are something I would be cautious of considering China feels comfortable putting diethylene glycol in toothpaste. Who knows what they use to kill bugs?

So, I told her that it was perfectly acceptable to clean up her roommate's stuff (her roommate will be out of town until Sunday). Pick the clothes up off the floor, put all of her foodstuff in the fridge (leaving no food out of the fridge, ever), and scrub down the bathroom really well, being sure to squeegee all the standing water into the drain.

I also found a nifty idea for a trap with items that she probably had available: a glass jar and petroleum jelly, along with a little food for bait. Simply put a two inch strip of petroleum jelly around the inside lip of the jar so that the cockroaches can't climb out once they go in for the kill.

And, because she wanted to be sure that they wouldn't crawl on her in the middle of the night, I told her to sleep with her light on.

By the end of our conversation, I think she felt a lot more comfortable with her problem--thinking that you can trap the little pests while believing they won't crawl on you always helps to elliviate some amount of anxiety. She was able to calm down enough to try to get some sleep, leaving me with the dilemma of what to do about potential stow-aways in her suitcase.