Where, oh, where did the week go? I'm not really sure how it happened that I didn't blog about anything all week. Our week certainly was busy. I probably slept through all my blogging time.

Anyway, this past weekend we had a "long" weekend. We worked late on Friday, early on Saturday, and again on Monday...so it didn't really feel like that long of a weekend anyway. This coming weekend we don't have to work on Saturday at all, so although we worked late this evening, it will feel like a longer weekend than last--if that makes any sense at all.

Memorial Day always makes me puzzle a little bit. I just find the whole tradition a little bit odd. Not that I have any problem honoring the soldiers that have fallen fighting for freedoms. I grew up doing that, too...just on Remembrance Day...and we didn't decorate graves by the masses or have picnics and play frisbee at the cemetery. It is just a little weird for me that all of a sudden, seemingly out of the blue (because I never can remember when Memorial Day is coming--I didn't grow up with it) the graveyard is alive with the vibrant colors of flowers, wreaths, and little windmill things.

But a holiday is a holiday, so it must be celebrated.

On Sunday, we had dinner at my family's house. I think I ate almost the whole pot of mashed potatoes by myself--I used to do that when I was 10 but haven't for a while. I like to think that Rachel ate most of them. We played games well into the evening and also got to look at some of my dad's new stained glass projects. I think that they are really good and that he should go to an art show and sell them...but, it's hard to part with something you created. We are running out of windows though, so we'll have to do something eventually.

The macaw on the left is the one he just finished. He made the one on the right a while ago. It's not the best picture, but I took it, so that's understandable. 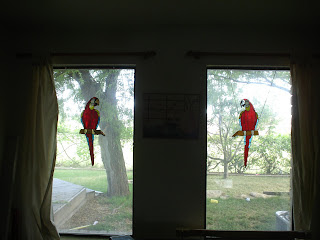 The rose he recently finished 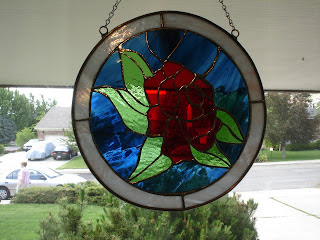 For his next project he's working on a 3-D frog. I think that will be really cool to see when it's finished!

On Monday, after working, we went to see Pirates of the Caribbean: At World's End with Andrew's family. I was having a hard day and was pretty emotional the whole movie. Apparently a lot of people didn't like it, but it made me cry and I thought the ending was rather touching (the part after the credits, not before).

We then went and had a nice barbecue dinner at Andrew's parent's house.

It was nice to not have to think of anything to make for dinner two days in a row! I love it when that happens!
Posted by Nancy at 11:32 PM