Bridget tagged me to do a photo post, which I've procrastinated in doing. This picture is actually from a folder on my desktop called "Pictures to sort through," but it is the 6th picture in the 6th folder so I guess I almost followed the rules. Truthfully I don't know why I have this folder on my desktop since I have a "My Pictures" folder on my hard drive just like everybody else in the world.

However I can't delete it because I haven't sorted through them yet and it's dangerous to delete anything labeled "to sort." My Grandma C. had tons of papers "to sort" when she died and my aunt thought about just throwing them away since there were so many (seriously dressers full of papers), but then she opened a drawer and sifted through some papers and found some stock certificates and figured she should probably go through everything. And that's why this folder is still cluttering up my desktop. I might find treasure in there.

Truthfully it's because I'm a pack rat just like my Grandma. I really shouldn't be. But I am.

Because sometimes you do find treasure! Sometimes the 6th picture in the 6th folder ends up being a portrait you took of your baby on their first birthday (or two days before, as the case may be) and you end up being really happy that you didn't just junk that file even though it's probably on your husband's computer anyway. Isn't she adorable? 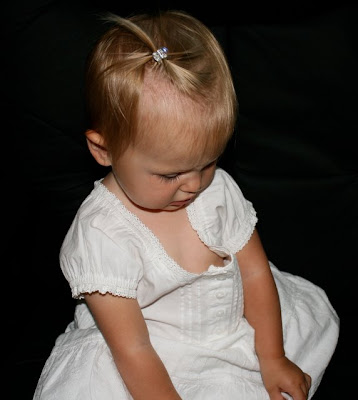 Besides there was only one picture in My Pictures/6th folder and I already used it on my blog back in August, so it would have been boring to use it again.

And Layla tagged me to share my Seven Wonders, so here we go!

Seven things to do before I die:
1. Go on a couple's mission with Andrew. I wanted to go to Russia; but Russia's been closed to foreign missionaries so I guess I'll just have to go wherever. Besides Russia is cold. I hate cold.
2. Go back to school to get my master's degree. We'll see when and in what. It will probably be after Andrew is finished with his PhD and has a teaching position at a good university, and when the kids are mostly in school.
3. Continue traveling the world. There are so many places to see. In short I want to go basically everywhere and anywhere. Except maybe Iraq...or Sudan...you know, places like that.
4. Swim in the Atlantic Ocean. I've never done this and it's been on my list since grade 5. I actually think it would be cool to take a dip in each of the "oceans." Except the Arctic one. Because I hate the cold.
5. Learn how to sew and knit. I took knitting lessons when I was younger but I can't remember how. And I've never used a sewing machine to actually make anything. I guess what I really want to do is make a quilt. But that doesn't involve knitting. I still want to learn that, too.
6. Fluently converse in a foreign language. I'm not sure exactly what my definition of fluent is. Probably something like not having to ask the person I'm talking to to repeat themselves after each sentence they say.
7. Be published. I want to write a story or a book or something and have it published. I've written a lot, I just haven't published anything. Yet.

Seven things I cannot do:
1. Drive. I didn't put it on my list of things to do before I die because I really have no desire to learn how to drive. Driving scares me.
2. The splits or a handspring. After all those years of gymnastics I still can't.
3. Drink tap water--here. I am so used to drinking tap water that I'm still getting used to not drinking it. It's hard for me; it's one of the things I miss most about North America.
4. Carry the jogging stroller upstairs with Rachel in it. I can carry the jogging stroller up the stairs and I can carry Rachel up the stairs, I just can't do both at the same time.
5. Stand the smell of butcher shops. Once upon a time I considered dating an old friend from the Calgary Regional Dances. He was a butcher, though, so my mom told me it was probably a bad idea. So I stopped writing him. I can't stand the smell, though, so it really wouldn't have worked out. I don't know how my sister worked at Cargil. I have to hold my breath and divert my eyes when I walk past the butcher shops here. I don't know what I'm going to do during Eid al Adha.
6. Stay mad for very long. Usually. Especially not when I'm mad at Rachel because she's so cute. And not when I'm mad at Andrew, either, because he'd do anything for me and never makes me mad on purpose.
7. Cross Bur Said without almost hyperventilating.

Seven things that attracted me to my spouse:
1. He is smart. He speaks 3 different languages, gets a 4.0 almost every semester, plays the piano and clarinet, and knows the gospel well. He's entirely well-rounded.
2. He helps out around the house. I thank Karen for this. He's not afraid to clean the toilets and if he comes home and dinner isn't ready yet he'll pitch in and help.
3. He is very sincere. His compliments and pick-up lines are rarely eloquent, but they are truthful. And I think that's sweet. His smile is sincere, too. And he's a bad liar. So I can totally tell when he's bluffing anything: a compliment, a mood. He's completely transparent.
4. I always have a good time when I'm with him. He makes me laugh everyday, and promised to do so from when we first started going out. Even when we're doing boring things it's fun because he's just fun to be around.
5. He's always trying to help me become a better person. On the way home from our first date he asked me if I had a scripture marking system--I didn't, and still don't--and then explained his to me. He is always bringing me erudite books home to read and suggesting articles for me to read. I read the news because of him, actually, because he talks about current events all the time and I want to have something to contribute to the conversation. Oh, and he encourages me 100% in anything I try to do. Yoga, bellydancing, cake decorating, learning Arabic. If I want to try it, he will get me the equipment and encourage me all along the way. So he's supportive. That's a good summative sentence.
6. He's a good listener. I have a lot to say, obviously...and he always listens.
7. He couldn't go a day without seeing me. Sometimes I'd be busy until 10:00 at night and he'd be at my house when I got home so that he could see me, just once, that day. Now we're married so he gets to see me everyday, no problem!

Seven books or writers I love:
1. Ella Enchanted
2. The Book of Mormon
3. Harry Potter--didn't ever think I would, but I do.
4. Chronicles of Narnia--and other CS Lewis tales
5. Historical Fiction, particularly in the swing era
6. Love you Forever by Robert Munsch
7. Martine Leavitt. She was my YW leader and I try to read everything she writes. I haven't read Heck yet.

Seven movies I could watch over and over again:
1. Star Trek. Yup, it's true. I'm a geek. But I don't like Star Wars so I'm some kind of an apostate geek.
2. Hotel Rwanda. Scares me to death every time, but gives me a lot to think about.
3. Most Pixar or Disney movies.
4. Uhhh, Miss Potter was good.
5. Wait Until Dark, The Princess Bride, and other "Mormon Classics."
6. Elf. It's "our" movie, unintentionally.
7. Uhhh...I'm having a really hard time thinking of seven movies I like. But I like the TV show The Office. I could watch that over and over.