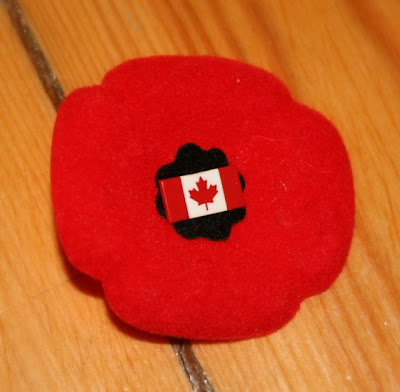 My cousin Eric posted on his photography blog about Remembrance Day, which got me thinking about Canadian traditions surrounding the day. My friend Bethany asked about poppy pins, so I think this will be the perfect way to answer her question and share some of the traditions I grew up with.

Poppies are sold by the Canadian Legion every year around Remembrance Day. To my understanding it's more of a donation-based program. When I was little it was only a quarter to get one at school but now I think it's more like a dollar.

In elementary school everyone brings their quarter (or dollar) to school and gives it to their teacher. Their teacher then goes out and gets the poppies. Or members of the Legion bring them to the school. Either way, school children magically end up with a poppy to put on a few minutes before gathering in the school gym for the Remembrance Day assembly.

Why only a few minute before the program you're asking. The answer is simple: 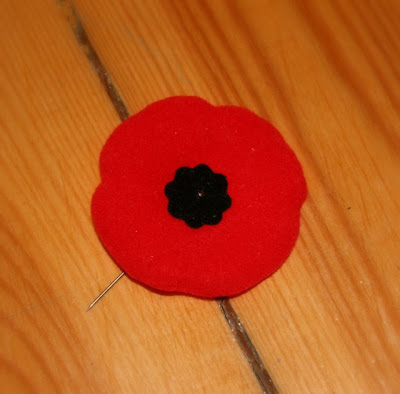 The poppies are on a straight pin. Who in their right mind would want a class of 20 to 30 grade school children to be armed with straight pins the whole day?

As much as our teachers encouraged us to act respectful the whole day long, we were prone to goofing off more than occasionally. Canadian children are normal children, after all, and we came up with several ways to use the poppies that were not part of the original intended use. Besides the poke factor, we'd fold the poppies in half and stick them in our mouths, pretending they were our lips, among other nonsensical things. 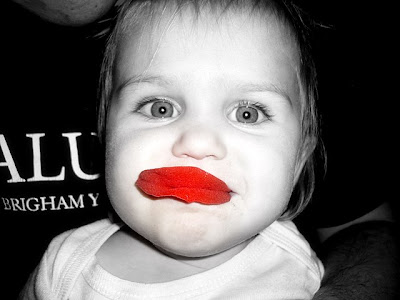 The month of November, however, always focused on Remembrance Day and eventually we grew to hold the same respect for the day that the older kids had. We began to understand the seriousness of the holiday and stopped wearing our poppies disrespectfully.

The poppy became the symbol for Remembrance Day way back in in 1921 due, in large part, to Flanders Field, and a poem written about the blood red flowers by Lt.-Col. John McCrae. Off the top of my head, I can't think of one Canadian who cannot recite this poem by heart.

In Flanders fields the poppies blow
Between the crosses, row on row,
That mark our place; and in the sky
The larks, still bravely singing, fly
Scarce heard amid the guns below.

We are the dead. Short days ago
We lived, felt dawn, saw sunset glow,
Loved, and were loved, and now we lie
In Flanders fields.

Take up our quarrel with the foe:
To you from failing hands we throw
The torch; be yours to hold it high.
If ye break faith with us who die
We shall not sleep, though poppies grow
In Flanders fields.

I'm not kidding when I say huge productions, either. There are plays, choir numbers, speeches by veterans, a bugle call, and, always, a minute of silence.

For me, these events were highly impactful, culminating all the study we'd done in our classrooms. Learning about the wars and the people behind them, and then listening to real people describe their experiences of the war was always so amazing and so surreal.

We were taught to have grave respect for soldiers, veterans, and the victims of war no matter which side they were on. I must say I have to agree with Eric when he says that is lacking in America--we are much more formal with our celebrations in Canada and Europe than in America. Thanksgiving Day is wonderful and I that opportunity to be thankful, but I also really enjoy Remembrance Day. I think it is very appropriate that Rachel and I made a poppy for our thankful tree because we are very thankful for the soldiers who give their life on behalf of our freedom. Maybe one day I will be able to attend another real Canadian Remembrance Day. Until then I will continue to wear my poppy each year out of respect for those who lie in Flanders Field. 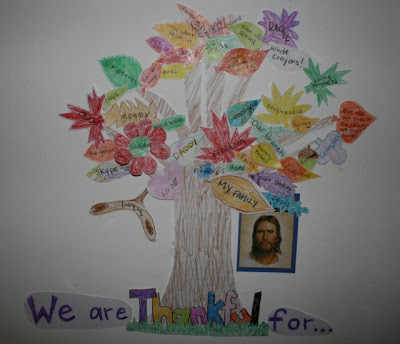