This year Thanksgiving rocked. The Tuellers invited everyone in the branch who had no where to go for dinner. We were the first to arrive and the first thing we did was take a dip in their pool. It's outside. And we used it on Thanksgiving.

That might not sound remarkable to you, but for me it was a novelty. 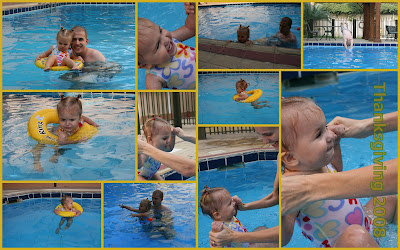 We had the pool all to ourselves. It was a lot of fun! The water was a little too cool for me, but Andrew had a great time diving in and splashing all around. Rachel also had a great time; we put her in an inner tube and let her loose. She panicked at first, but soon she got the hang of it and was kicking herself all around the pool. Andrew flipped her out of the inner tube once (by accident, of course) and she just kept on kicking her legs and swimming around until he picked her back up (which was only a few moments). She's such a little fish!

By the time we'd dried off and changed (in our private changing rooms, complete with showers and toilets) some more guests had arrived and we spent the early part of the afternoon chatting with our hosts and other friends while munching on freshly roasted nuts (that were still warm) and vegetable trays while drinking freshly squeezed juices.

Rachel had a great time shoving as much food as she could into her mouth. At one point I made Andrew make her spit everything out so we could see what she had in there because she looked like a little chipmunk. She had two whole almonds, a chewed up cucumber, a pistachio shell, and a few peanuts. She had swallowed nothing. But she did manage to swallow an olive pit. We'll see how that turns out a little later.

The chef made a fabulous spread for dinner. There were two giant turkeys, complete with those little paper things on their legs. I've never actually seen those before in real life. I should have taken a picture but I was too busy getting food... There was cranberry sauce, gravy, mashed potatoes, stuffing, sweet potatoes, corn pudding, an onion sauce, a salad, buns...oh, and then the pies! Pumpkin, pecan, apple, and ice cream pies! They were all so good!

Sister Tueller said that the chef chose very traditional dishes and made everything from scratch. And by scratch I mean the ice cream was made from vanilla beans crushed by the chef himself.

It was so fun to be surrounded by such great friends (eating off of plates trimmed with 18 karat gold and drinking out of crystal glasses).

Before we dug into the feast, however, we went around the room and everyone had to say what they were thankful for. I think it would be fair to say that everyone mentioned being thankful for their families, the branch, and the gospel in some form or another. We were very grateful for the hospitality of the Tuellers. They opened their home up to everyone who didn't have anywhere to go for Thanksgiving, but more specifically to the young couples in the branch. The Tuellers were here in Cairo 27 years ago (1981-1982) as a young married couple and had been shown such generosity from the members of the branch then; they figured this would be a good way to return the deeds done to them when they were just starting out their family.

They are such an amazing family!

It struck me as incredible that we could one day--27 years from now?--be in their shoes, in such an opportune position to give. We never know what we will become, do we? I don't imagine that the Tuellers ever dreamed their life would play out the way it has. We, likewise, are always surprised with the twists our life has been taking. Hopefully one day we will be in a better position to give, but if not and until then we will continue to give all we can.

Since the young families of the branch were invited, there were, of course, several children for Rachel to play with. Rachel loved playing with Finn, Abby and Lydia, but I think she enjoyed following around Lu'ai and Robby even more. She even got brave enough to pet the Tueller's dog after watching Lu'ai and Robby play with him.

Robby just turned 3 and Lu'ai is 2 and a half, so they are somewhat older than her. She struggled keeping up, but she was not going to be left behind. Robby's family, the Cammocks, live in Zamalek so they go over to the Tueller's house a lot (to use their swimming pool and hang out) so he was giving Rachel and Lu'ai the full tour, showing them every little nook and cranny of the house, I'm sure.

My favorite part about today is that Lu'ai and Robby taught Rachel how to play fight. It was so hilarious to watch! Pretend punches and kicks were flying left and right, and all three of them were yelling and making punching noises, "Pow! Pow! Pow!"

Lu'ai actually clocked Rachel a couple of times and I could tell she wanted to cry but she just sucked it up, said "Pow!" and kept on chasing those boys around! She's a tough little cookie! 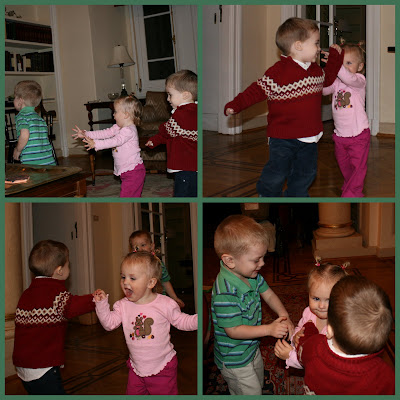