Something lives in my ceiling

A couple of days before Halloween I was chatting with my sister, Abra, on IM. We had been talking about some serious stuff but I was a little distracted and abruptly changed the topic on her. It wasn't my fault I was distracted, exactly. I was trying my best to be serious...but it was jut difficult to be serious with Andrew running around hitting the ceiling with a broom to make whatever was in our ceiling run around. I simply couldn't focus.

Here's a snippet of our serious conversation before I so rudely changed the subject:


I didn't want it to be a rat, though, so although a rat was the logical answer I continued to hope it was an over-sized mouse or undersized cat.

There are many reasons I didn't want it to be a rat. Rats bug me a little more than mice, I guess. No offense, Shallee. Your rats are cute in their own right, but we're talking about sewer rats here, although I suppose technically they are ceiling rats. It's kind of like the weevil vs. cockroach argument. Clearly the one that lives in the sewer (and occasionally in my ceiling) is more disgusting than the one that lives in wheat.

I believe there's a family story of a rat popping out of a toilet and scaring an ancestor (help me out, mom...) and I have never really liked toilets, anyway, so knowing that there are rats running around really won't help encourage a love affair with the kitchen or bathroom.

Pity, really. I was barely beginning to feel comfortable in the area of the house with plumbing, now that it is virtually a cockroach-free zone.

There's definitely a rat living in our ceiling. It's been merely hypothetical for a few weeks, but now it is fact.

When I first started hearing noises, Andrew thought I was crazy.

"Andrew, there's something on the roof," I'd say.

Touché! We live, not on the ground floor but, on the first floor of a soon-to-be four storey apartment building so we really don't have a roof.

"Well, then there's someone on our balcony!"

"Well, then there's something on our balcony!" I'd mutter under my breath.

"Andrew, seriously, come listen to this!" I'd holler.

Eventually I got him to come and listen and he heard the scratching noise, too, thereby proving my sanity.

So we've spent the last few weeks listening to this thing scamper around above our heads and occasionally breaking out the broom to hit the ceiling, just for kicks. But there's definitely a rat living in our ceiling.

I saw it today.

My day is filled with a lot of playing with Rachel. I only ever not-play with Rachel in microbursts of freedom.

There is no doubt in my mind that a rat is living in my ceiling. Our windows are frosted so we can't actually see what's outside, unless that thing is plastered to the window, and then we can see just fine. Kind of like how you can completely make out the gecko we saw on our window back in September. 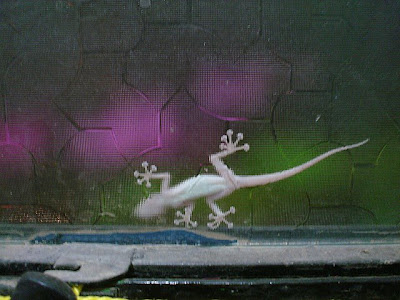 Obviously not a rat
So I could see his big, fat, brown body; his wee beady eyes; and his plump, pink tail. Definitely more of an Emile than a Remy. He was huge as far as rats go--of course, I don't actually know how big a rat has to be to be considered huge, but in my books this guy was big. I'd guess about 10 pounds.

Rachel and I went outside to see if we could see how he was getting into our ceiling. We were stalked by several baladi cats on our way. I kept having to stomp my feet to shoo them away, but they kept coming back and stalking around our feet. I don't know what their problem was today. Usually they leave people alone. Maybe they were trying to warn us about a R.O.U.S. on the loose.

Truthfully, I didn't think we'd ever have a rat problem here because of all the cats around. But apparently I was wrong. It's not the first time and it won't be the last.

Anyway, when Rachel and I examined the rat entrance, at least the best we could from the ground, we noticed that it isn't just a little hole. No...there's a huge gap in the side of the apartment building leading right into our ceiling. Oh, happy day. 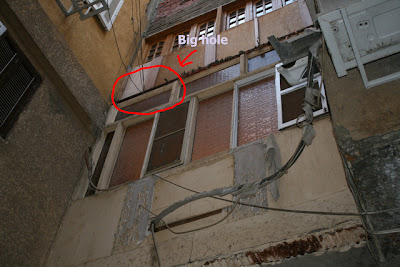