Apparently Aden is a really good juggler, which Rachel finds very entertaining. She loves going into the spare bedroom to watch him practice. It cracks her up. Sometimes Jaehee will get out the juggling balls and let Rachel try to juggle. She holds one ball in each hand and then bops around. It’s pretty funny to see.

Today Aden decided he needed some more room to practice so left to go throw some pins at Canal Street, which is more of a park than a street. Or canal.

Rachel was pretty upset that he got to “go” and that she had to stay home. She went to the door and started knocking while pleading “Go! Go! Go!” to anyone that would listen to her.

I didn’t know where Aden had gone, but Jaehee did. She volunteered to take Rachel out so they could watch Aden practice. Rachel was thrilled.

Her enthusiasm dulled a little when I told her that she had to go potty, put on pants, and do her hair before she could leave the house. She protested gently until she realized that I was serious about her not leaving the house wearing only underwear. And then she threw a royal fit. Eventually we did get her ready to go and she left with Jaehee.

Ten minutes later I heard some wailing that sounded oddly like my baby.

He always thinks I’m hearing things when I think I hear Rachel crying, especially if we’re just waking up. The crying got louder and louder, however, and soon it was just outside the door.

I opened the door before anyone knocked and found a very sad little baby. Big tears were running down her cheeks and she was, as I had figured, absolutely wailing.

“I’m so sorry!” said Jaehee, “She started running and then she fell flat on her face. I don’t think she needs stitches but there’s blood all over her sweater. I didn’t mean for her to get hurt!”

Jaehee was worried that I’d never let her watch Rachel again. Puh-leeze! All she did was land on her chin. It was bound to happen sometime.

As soon as she was in my arms, Rachel started to calm down. It’s amazing how magical mommy’s touch is.

The unfortunate part of her immediate calmness was that the cut was bad enough that it needed to be washed out. After I had finished washing it out, it was still bleeding and needed a band aid. Rachel flipped out. You would have thought we were torturing her!

I had her on my lap with her head between my knees. Andrew was helping hold her hands down and her head back so that I could access her chin. Rachel was doing her best to squirm her way out of our grip to claw at the band aid.

She cried for a half hour after we put the band aid on.

We gave her a “brave treat,” showed her that the band aid had kitties on it, watched Little People, read books, held baby doll, and tried coloring. Nothing could distract her from that band aid. 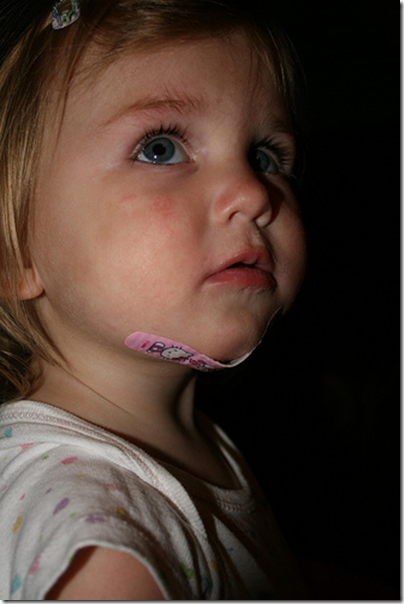 Soon after we stopped trying to soothe her she found the container of band aids. She opened it up and took some out to look at them and, noticing that they were harmless enough, proceeded to play with them. She gave some to Jaehee, spilled some on the floor, picked them all up, spilled them again, picked them up again, closed the container, opened the container. She had a great time.

And she completely forgot about the band aid on her chinny-chin-chin.

So that’s a win-win situation right there; actually since Rachel was happy, I was happy, and Jaehee ended up happy, too, it was more of a win-win-win.