I’ve been working on some papers for primary recently and since I’m a perfectionist they are taking a while. Curse those print layout classes we took in college! I kind of miss the days when I would just throw things together sloppily in Word.

Anyway, while I was working, Jaehee and Rachel were coloring. It’s been great to have Jaehee around during the day. Rachel loves her and is quickly progressing from “Juh” to “JayJay.” Soon she’ll be saying Jaehee as clear as a bell.

They were coloring a beautiful nature scene. Well, Jaehee was. Rachel was mostly scribbling circles, which she loves to do. She picked up a blue pencil crayon and drew a lovely blue blob.

Rachel smiled a big smile and point up high, as high as her little arm would reach, almost falling over backwards in the process.

“Is it the sky?” Jaehee asked. 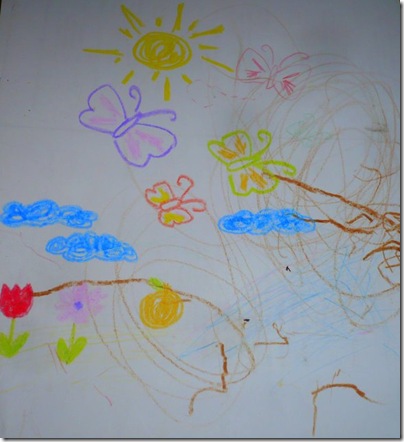 There, in the lower right hand corner, is Rachel’s little bit of sky. The brown was added later. I’m not sure what it is. Perhaps a tornado or dust storm. Rachel isn’t too familiar with either of those yet, but she knows the word “city” so maybe she also knows “tornado” and just hasn’t shared her knowledge with me yet.

Jaehee was wearing a shirt with a cityscape on it today. Rachel pointed at it and said, “CITY!” as clear as a bell. I was a little shocked, not because she hadn’t done that before but because she had. I thought the first time was a fluke—she pointed at a poster in Spain that had a bunch of buildings on it and said, “City!” I was like, “Whatever, she doesn’t know what she’s talking about.” Apparently, though, she does.