It was hard to wake up on Saturday morning after staying up so late with the girls the night before. We had all signed up to attend the branch service project at the Abu Zaabal Leprosarium—sanding down and repainting the benches in the gardens. 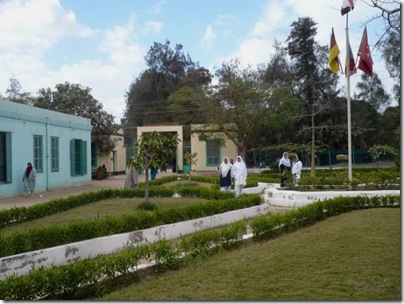 The drive out to the leprosarium involves leaving the main road and heading down a bumpy road. I remember getting a little queasy the last time I was on my way to the leprosarium but this time was awful. I had to trade seats with Sister Lindsay so I could sit by the open window and gulp down the “fresh” air. I was in serious danger of losing my breakfast, but we made it alright and I was fine once I was out of the van and walked around for a few minutes.

I brought Rachel with me and she had a fabulous time “helping” sand the benches. She had her own piece of sandpaper to use but kept going around to steal everyone else’s paper. We were all using rocks and things as sanding blocks so we could keep a better grip on the paper and she was very interested in this technique, I guess, because she probably stole everyone’s rock at least once.

It was really pretty difficult to get anything done with her there. I didn’t really think about that before I signed up. I don’t know why I thought I’d get much accomplished at at service project, while toting Rachel along, if I have a hard time keeping my house in order with her around. She was trying very hard to help; she was just too little. 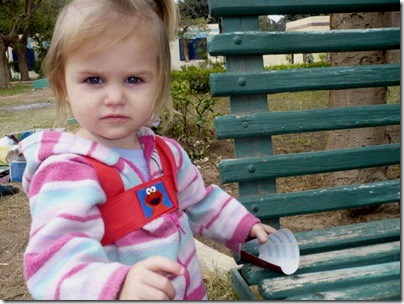 As the German nurse in charge of our project said, “Poor baby! Everything is no, no, no!”

I tethered Rachel to my wrist with a leash and we sanded as much as we could together, which I felt wasn’t a whole lot. Our contribution was most definitely the “widow’s mite,” or, in our case, the “young-mother-towing-busy-toddler’s mite.” But there were so many people there that we got the benches sanded in no time. There were 19 members from the branch, plus Rachel. You do realize that’s like 25% of our branch. It was an amazing turnout, even without “the husbands.”

When we’re helping we’re happy
And we sing as we go!
For we love to help lepers
For we all love them so!

She also had a song about ponies for Rachel that I thought was really cute. There was a horse at the leprosarium, to pull the benches to where we were working, and Rachel was absolutely terrified of it. She’d scream at it the whole time it was there, almost crying. Then it would leave and she’d say, “Bye-bye! Neigh! Neigh!” and tell everyone, with much excitement and many made-up words about the horse that she saw. Sister Levanan tried to make her feel better about the horse, but it didn’t work because it just reminded Rachel about the horse:

I’ll have to ask her about that second verse because it was really a cute song. She also had a song about monkeys. And about every other word anyone said. She reminded me kind of my mom’s aunt Celia, who I never remember meeting but who apparently had a song about anything. My mom used to say that I picked that up from her. But trust me, Sister Levanan sings a whole lot more than I do and by the end of the day Rachel was taking her by the hand and showing her all sorts of things: birds, horse poop, lizards, flowers, ants.

They didn’t have enough paint brushes for everyone at first, so Rachel, Sister Levanan, and I were hanging out while everyone else worked. When they dug up a few more brushes I decided to just keep wandering around with Rachel. 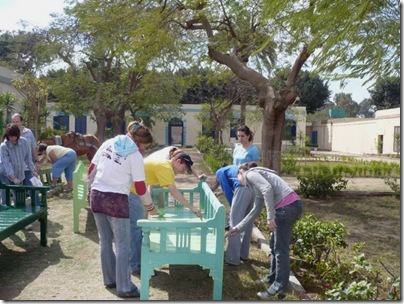 We watched everyone else work and were feeling pretty useless. Rachel found a little stick that was splayed at the end and used that as her pretend paintbrush. She seemed content to rub it on the bench without dipping it in the paint, which I was happy with. 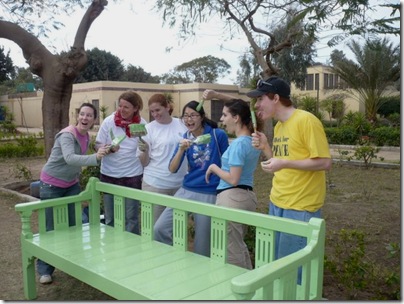 I was even happier, though, when they brought more benches over to be sanded, though, so that I could feel useful again. We sanded clear until it was time to go and even though we didn’t even go near the paint, Rachel somehow ended up with wet paint all over her hands.

It made her rather nervous, at first. She kept growling and scratching at her hands. Soon she came to accept her new pigmentation and relaxed a bit, only to have me insist that we scrub it off. She seemed to be less happy about cleaning up than she was about getting messy in the first place and opted to leave me and cuddle with Melissa, who was rather green, herself, while we took a quick tour of the complex. 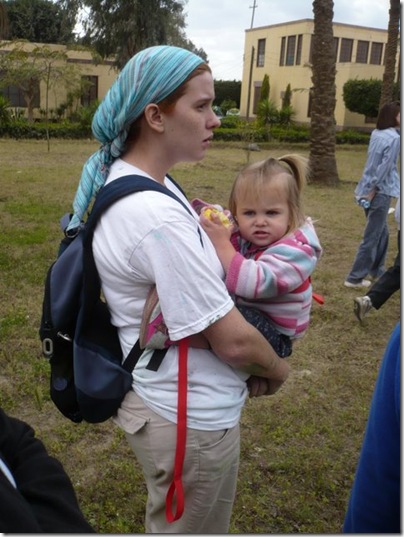 The tour was pretty similar to the last tour I took, but this time we got to see the shoe-making shop instead of the bread shop. They make special shoes for the lepers that have seamless insides and are lined with a non-irritating fabric. They can’t have any seams touch their sores because it aggravates them. They also make special hoes to help people who have lost their toes balance so that they can still walk, as well as making prosthetic limbs. It was very interesting. 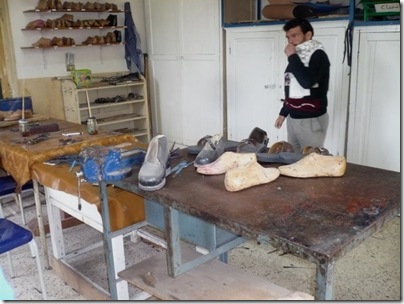 On the way home, Rachel sat in the back of the bus and played with Lindsey and Jaehee the whole way, which was nice. They tried teaching her how to make peace signs, taught her how to say barbeque, and many other cool tricks.

I phoned Andrew when we arrived back at the meeting house and asked him to come and meet us. Rachel and I started walking back with Jaehee, Lindsey, and Carolee, knowing that we’d meet up with Andrew at some point on the way home.

She was just initiating a game of 1-2-3-Jump, with the help of me and Jaehee, when she saw Daddy.

“No! No! No! No!” she yelled, gripping firmly onto Jaehee’s leg and waving goodbye to Andrew, somewhat cruelly, “Bye! Bye! Neigh!”

The only translation I can figure is that she wanted Andrew to go back with the horses. She had too much fun hanging out with “the girls” all weekend to have Daddy come home and spoil it!

I thought for sure she’d be excited for him to come home since she had been asking about him all weekend.

“Dada?” she’d asked all day Friday, while signing “where.”

“He’s riding horses. Do you miss him?”

We could do the conversation in reverse, too.

“What’s Daddy doing?” I would ask her.

I was impressed that she had understood what he was doing. I just thought she’d be more excited to see him when he got home. After he picked her up and spun her around a few times she decided that having Daddy home was alright, too.

Personally, I was very excited to have Daddy come home. I just about boycotted motherhood for the rest of Saturday, leaving Rachel completely in Andrew’s care. 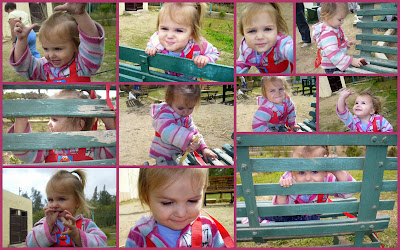