It was such a nice day that, although very tired, we decided we shouldn’t remain shut up in our hotel room all night. Instead we set an alarm in order to wake up in time to take a felucca ride on the Nile, hoping to catch the sunset while on the river.

Bargaining down the price for a felucca ride is always a bit of a joke, even in Cairo. In Luxor, though, it was downright ridiculous. They lies they tell to jack up their prices are unbelievable at best, and downright outrageous at worst. We finally agreed on a price with the boat vendor: 40 LE for the whole boat for an hour.

That’s about what we would pay in Cairo, so it sounded fair to us. We followed a little boy onto the bank of the Nile, going under the boardwalk and into some muck. We used a plank to get from the bank to the felucca. It was a little scary for me since I was holding Rachel and she tends to throw my balance off a bit. We all made it on the boat without falling into the murky water, though. 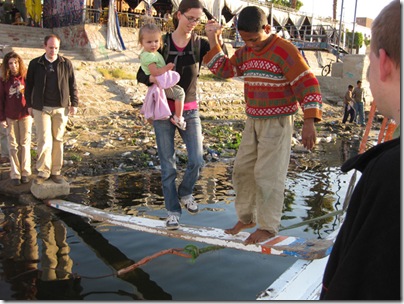 Sensing that both parties were a little disgruntled the “captain” said that since we both wanted to ride at the same time and they didn’t have enough staff, we would share the boat and split the cost: 20 LE for us and 20 LE for the Japanese couple.

This seemed like a good deal to us, and that’s how it works in Cairo—you rent the whole boat—so we made friends with the Japanese couple and sailed on down the Nile. 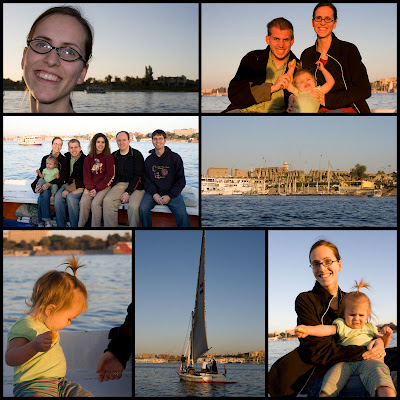 Sailing on the Nile in Cairo is one thing. Sailing on the Nile in Luxor is a completely different experience. It’s still a little trashy, but really, it’s not half as badly polluted as it is downstream in Cairo, and the air is much more clean and fresh. The sun, instead of disappearing suddenly into a thick cloud of haze and smog, actually sets and there is usually a brilliant display of color. In Cairo you usually just get a dusty orange that quickly dissolves into grey twilight and the sunset is over. It was definitely nice to have a little vacation from all the pollution. 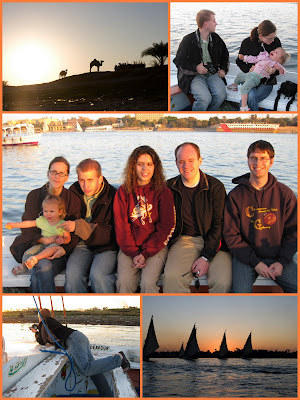 When our ride was over, the Japanese couple hopped out of the boat, shoved 20 LE into the captain’s hand, and took off. We were a little bit slower going. We had to gather up all our hud—babies use a lot of stuff—and work our way off the boat. The Japanese couple was long gone by the time all of us were on the shore.

Andrew gave the captain 20 LE and we all started walking away. The captain followed us yelling about needing another 20 LE for the other couple (the Schillings) and 10 LE for David (since he was half a couple). We ended up having a huge argument with the captain because his “boss” had told us that we could have the whole boat for 40 LE. We shared it with another couple, who paid half of the 40 LE, so we only owed them 20 LE.

And even if we were to pay him the full 40 LE that we had originally agreed upon, before we knew we were sharing the boat (and were told we’d be splitting the cost) with the other couple, we would be paying less than 10 LE per person.

I hate having to barter for everything here. I prefer posted signs with the cost clearly labeled so that I know exactly what I’m getting.

We went out to dinner that night at the Luxor Hotel Hamees Restaurant-bar-Coffee, mostly because their menu was hilarious.

Most of us got pizza, and we were sure to order it exactly as it appeared on the menu. I had Chicken Pizza (also available as Chiecken and Cchicken) with green paper and hushrooms.

The restaurant is right across from the Luxor Temple so we stopped by to get some night time pictures before heading back to our hotel to put Rachel to bed and watch Wall-E. 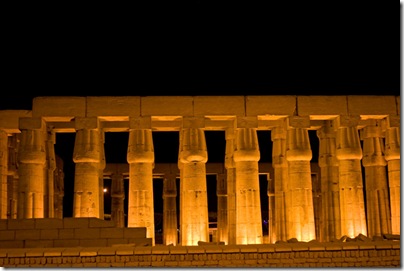 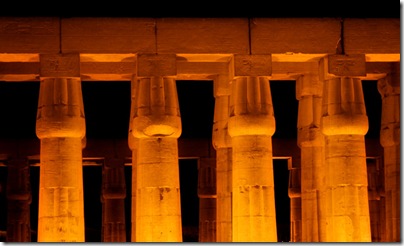