After waiting outside with a bunch of soccer moms for a guard to open the gate into Victoria College, Rachel and I walked right on inside like we were supposed to be there. And, at least according to our plans, we were supposed to be there. We wanted to play at the playground and usually Victoria College is open to the public. Usually you can just go inside any old time you want.

Lately, however, the gate has been closed. And there are men with guns standing outside it so it’s not like sneaking in is easy. Unless you happen to look like a soccer mom, which I guess I do.

Thick brick walls surround the perimeter of complex, which consists nothing really worth any protection: some fields, a parking lot, and a rundown playground. But there is a big thick wall keeping people out, anyway. The tops of the walls are inlaid with shards of broken glass, and if you managed to get to the top of the wall without cutting your hands to pieces it wouldn’t do you any good because then you’d have to climb over a six foot chain link fence. 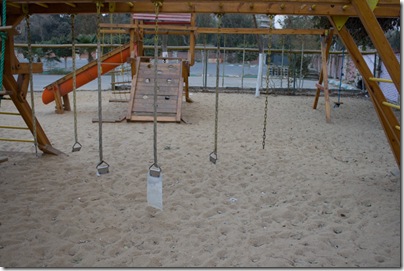 A door too small for the average person to walk through without ducking serves as the only pedestrian entrance. There is also a gate leading into the parking lot from the street. It is usually heavily chained up with a severe-looking pad lock.

If there ever was a rebel coup here, I would hope to find myself inside Victoria College while it happened. It would take days to break in, deespite the shoddy Egyptian workmanship—they don’t use much mortar here—the wall looks pretty sturdy. People have tried to break through the wall in several places, you can tell, but the wall still stands. The guards don’t even have keys so bribery wouldn’t even help you get in.

It’s an ominous place, to say the least, and it doesn’t get much cheerier once you find your way inside. In fact it looks very much like the outside, except that they painted the brick wall pink over by the playground to help ease the feeling that you’re locked in a prison, I guess.

The slides aren’t slippery and the swing sets are a a graveyard of empty chains. Only 3 swings still have usable seats. The roof of the “tree house” has caved in and the ground is covered with trash.

But it is a place for Rachel to run around without any inhibition. She can’t break anything, at least not any worse than what it already is, and her risk of getting hurt is just as great as when she climbs onto the back of the couch and stands up. So I don’t have to referee her playtime, which is nice. 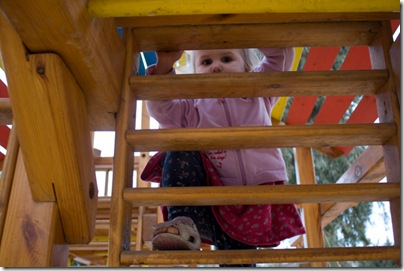 I almost had to referee the guards, though. When we walked past a set of guards, because, of course, there are multiple sets of guards placed strategically around the compound (just waiting for someone to try to climb over the fence so they can snipe them off, I guess), they were play fighting. It made me a little nervous to see a uniformed military officer armed with an AK-47 kick his friend, steal his gun and point it at him. I mean, those things are loaded…but I just walked on by, hoping that they were joking while they continued to try to wrestle each other’s weapons away.

When we made it past that set of guards, we had to pass one other set of guards to make it through the tiny door. The playground was deserted but Rachel and I made our way over to it, anyway; the guards eyed us suspiciously. Clearly we had gone the opposite direction the rest of the soccer moms were heading. 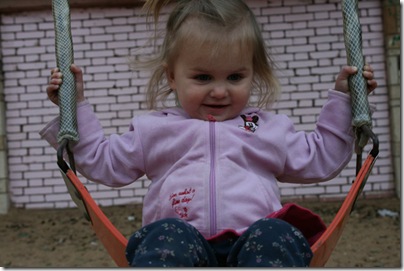 We tried our best to ignore the stares and play at the playground normally. Rachel actually had no problem in this department, but I was a little nervous about what I would say if the guards asked what I was doing there. A few moms filtered over after a while, giving us some company and making a good decoy. 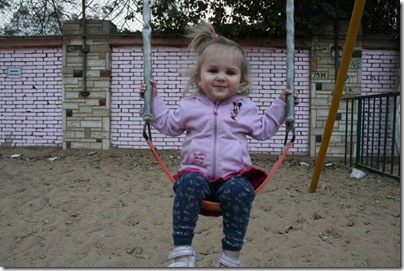 A little Chinese girl was there with her mom. She was probably a year or two older than Rachel since she was much better at climbing around and seemed to be able to talk a lot better than Rachel. Since I don’t speak Chinese I’m probably not the best judge of her speaking ability but she seemed to be making sense to her mother. 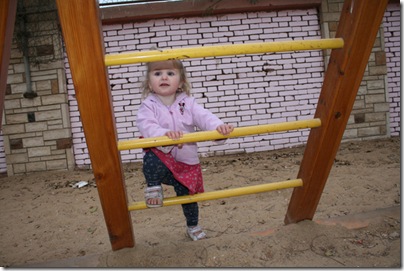 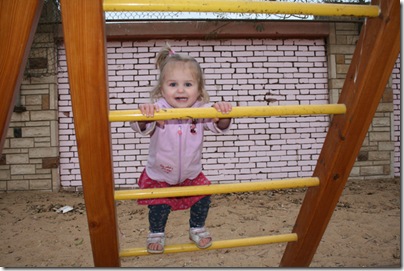 They were singing some songs together, one of which had a “cha cha cha” chorus. Rachel quickly caught on to this and stood beside them dancing around until they got to the chorus. Then she’d add her “cha cha cha” in with theirs. They thought it was hilarious. At least, they were smiling and laughing at Rachel while chattering back and forth in Chinese, so I think they thought it was hilarious.

It was about at this point that Rachel decided she and the other girl were friends and that she would share her snack. She bravely took a goldfish cracker out of her bowl and walked over to the little girl, fully intending to give it to her.

With every step she took, however, her hand moved closer and closer to her mouth. By the time she reached the little girl she had already chewed and swallowed the goldfish. She held her empty hand out to the girl and smiled her invitation of friendship. Then she looked at her hand and frowned quizzically.

She ran back over to me, grabbed another goldfish, and tried to deliver it again. This time she held her arm out straight in front of her. Slowly but surely her arm bent closer toward her mouth with each step she took and the goldfish, once again, disappeared into her tummy. She was clearly frustrated when she got to the little girl.

What had happened to her goldfish?!

She did this 5 or 6 times and was almost crying before I helped her walk the whole way to the little girl without eating the cracker first.

It was so hilarious but she was taking it so seriously; it was all I could do to not laugh at her. She hates it when we laugh at her when she doesn’t think she’s being funny. 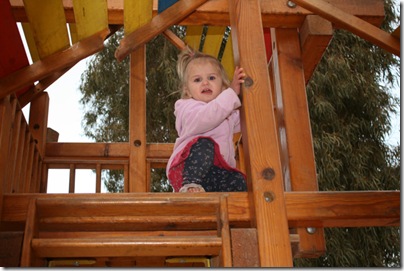 She must be her grandmother’s granddaughter,though. My mom once bit the head off her very favorite paper doll without even realizing it. She searched high and low for it and eventually ended up blaming my aunt for taking it. While she was hiding and sulking she decided to pray. She wasn’t really expecting an answer because she was already convinced that Auntie Arlene had stolen it, but she felt a strong prompting to look in her mouth. To her surprise the doll’s head was stuck to the roof of her mouth.

Thinking of that made me laugh out loud. Rachel heard me and assumed I was laughing at her so she screamed at me and bit her hand—that’ll show me. She was having a hard time recovering from having her own mother laugh at her for no apparent reason and it was getting dark so we decided to leave the confinement of Victoria College before all the other soccer moms did and we were either questioned or accidentally locked in. (Or before Rachel progressed from growling at other children to biting them). 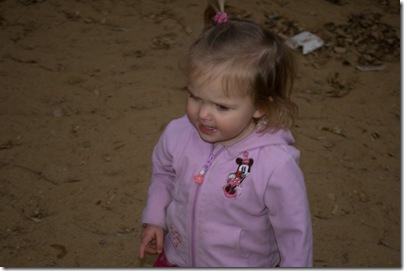 Normal playgrounds are one thing I miss about America. I would love to be able to just go to the playground and not have to worry about sneaking in or only going on “free” day. I suppose finding new things to do with Rachel forces me to be adventurous, though I’m not sure I need much more adventure here…