This weekend Andrew went out of town with the scouts. I was surprised he decided to go because this particular excursion was a horseback riding adventure and Andrew’s last horseback experience didn’t go so well. When Josh called to invite him I said, “I don’t think Andrew will want to go but I’m sure Aden will, so I’ll let him know.”

Andrew overheard me saying this and asked what it was he wouldn’t want to do.

“Go horseback riding from the Great Pyramids to Saqqara and then camp out in the desert.” I informed him.

At first he agreed with me. Five minutes later, though, he had changed his mind and was already calling Josh back. He’s just full of surprises.

Carolee, Jaehee, and I found ourselves husbandless this weekend. Naturally we decided we should keep each other company. We sat together at church, which was wonderful because that meant I still had someone to pass Rachel off to when she got bored with me, and had dinner together on Friday evening, courtesy of Jaehee.

Lindsey came too. Her weekend, which was supposed to be a fun-filled trip to visit her father in Saudi Arabia, took a turn for the worse and she found herself with nothing better to do than hang out with us boring married women.

We were supposed to meet at Carolee’s house for dinner at 6:30. The plumbers were over fixing her bathroom. Their apartment has leaky pipes which have been dripping raw sewage on the floor below them for quite some time now. We’re talking years, probably. Recently it has gotten so bad that the tenant moved out because she had to use an umbrella to use her bathroom. It was high time the plumbers came.

They weren’t supposed to be there at dinnertime, necessarily, since they arrived at 1 in the afternoon, but they were. And thus we had dinner at Carolee’s place so that she didn’t have to be home alone with the plumbers.

We had an awesome dance party…mostly we just watched Rachel twirl around the room, but we all got up and danced some to encourage her to continue. It was a lot of fun! 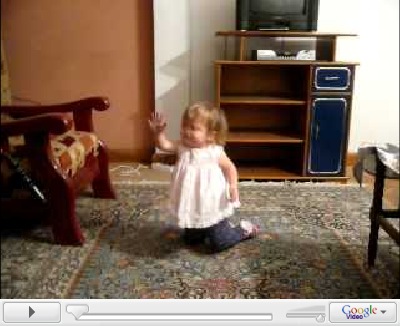 We didn’t even start eating until the plumbers had left and by this time it was getting close to Rachel’s bedtime. After we had finished eating we went back to our place to put Rachel to bed and play games. Rachel went to bed without a fight, which was nice, and then we played Fluxx and Cutthroat Uno and told stories until late in the night.

I wasn’t lonely one bit. Until everyone went home and it was time to go to bed. The bed was cold and empty and I had to do everything by myself: locking the door, turning off the lights, setting the alarm clock, etc.

As soon as I had gotten in bed, I heard the power go out. The silence was deafening and all I could do was curse Andrew for taking the flashlight with him while I tried to figure out my action plan for in case something was wrong. I might be a little paranoid but sometimes things really are wrong so I don’t think it’s bad to have a plan.

It was late at night though, and too dark, and I was scaring myself so I was glad when everything powered up again two minutes later.

Somehow the soft glow of the alarm clock and the hum of other electrical appliances made the night seem a lot less intrusive and, after lying awake for a few hours, I was able to go to sleep. Alone, for the first time since the NSA debacle (over 2 years ago).