Our last stop for the day was Madinat Habu, and was definitely the crème de la crème of what we saw on the West Bank. The Lonely Planted touts it as “one of the most underrated sites on the West Bank,” but we couldn’t decide between it and another place nearby. We asked our driver which was was cooler.

“They are both very interesting places,” he answered, although the likelihood of him having ever been inside either is rather slim. Most Egyptians aren’t up for tourism, even though the cost for a local to get inside any tourist site is amazingly inexpensive.

Our friend Patrick said that some of his undergrad Egyptian students don’t even know where Dashur is, and it’s just outside of Cairo. They’ve neither been to it or heard of it.

So we doubted that our driver had been to either place, especially because he gave such a laissez-faire answer.

“But if you only had time to visit one place, where would you go?” Andrew pressed further.

He answered with such passion that we simply had to take his advice. Plus, he was driving. And that’s where he was currently going.

We stopped at a ticket booth in a small, sleepy town, that sold tickets to all the surrounding sites. They didn’t have any tickets left for Madinat Habu, but gave us a ticket for another destination and wrote a note on the back explaining that we actually wanted to go to Madinat Habu. They said it would work out fine because the cost of the two sites was the same so we paid a fair price.

The minute we got to Madinat Habu we were all in awe. And it was only the outside! 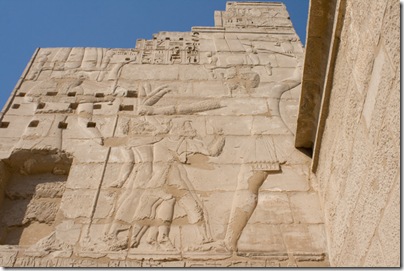 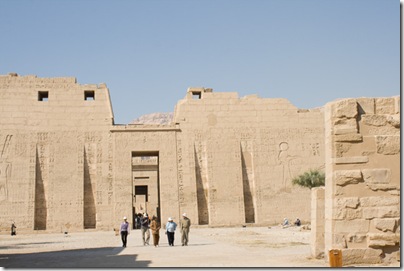 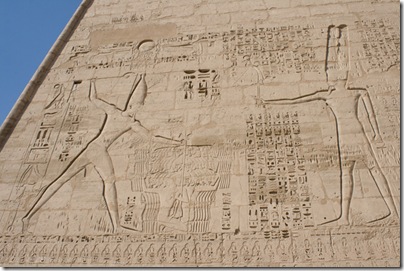 Andrew had to explain to the guards, dressed casually in galabias, why we didn’t have the right tickets and got stuck conversing about why we were in Egypt, the weather, and Rachel. The guard left us exclaiming that he “wish[es] that [Andrew] should be a professor, a mighty professor, and a wonderful professor.”

I happen to wish that, too. So long as it comes with a steady paycheck.

Madinat Habu not only is remarkably well preserved, it also is remarkably unpopulated by tourists. In fact the place was virtually empty which meant that we had a lot of fun. Not that you can’t have fun when there are a lot of people around, just that sometimes it’s easier to take your time and enjoy things without a crowd jostling around you.

It also means that the tourism police aren’t nearly as involved as they are in a place like, say, Karnak. Instead of actually doing their jobs they’re off smoking their hubbly bubbly so we can put Rachel in ancient tombs and do other things that we wouldn’t get away with in a more visited area. 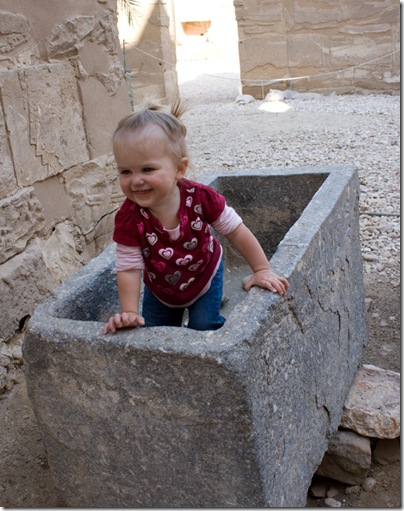 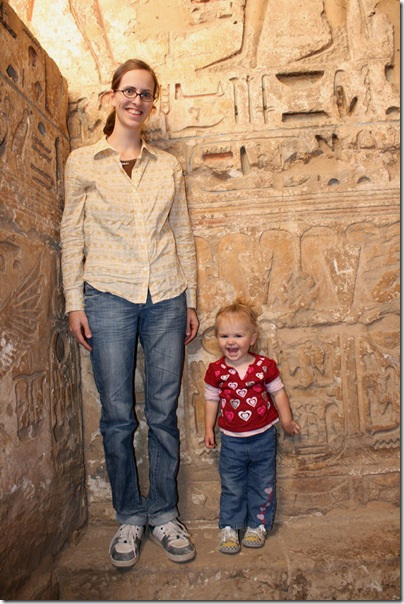 Rachel’s enthusiasm for the ancient world didn’t last long, however, and she soon retired from running around and popping out from behind ancient pillars to cuddling in my arms. 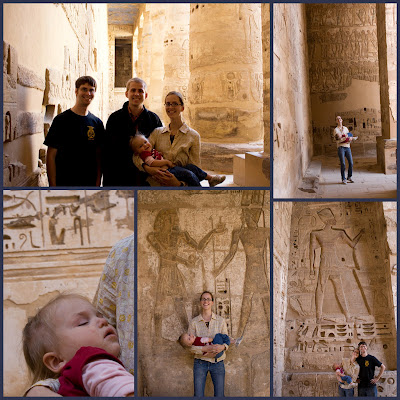 It’s really rather unfortunate because there were so many neat things to see. She won’t remember it, anyway, but it still would have been neater for her if she had been awake. 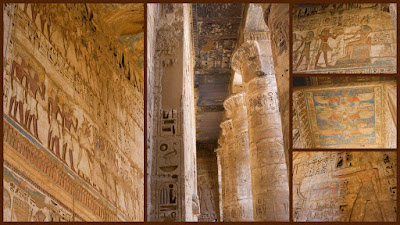 The ceilings of many of the pylons are still intact so the paint on both the ceiling and walls is still very vibrant, and there is so much of it! 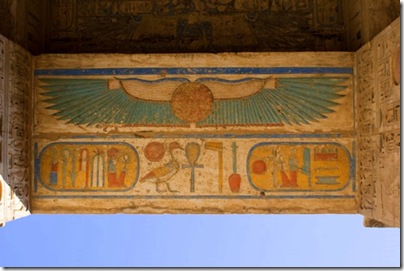 The hieroglyphics are very well preserved and were all over the place. They seriously covered almost every visible surface in the whole complex. It was amazing to see. I can’t imagine how much work it took to construct something like this! 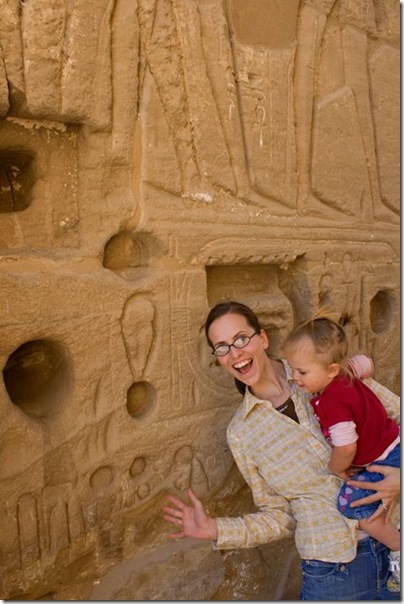 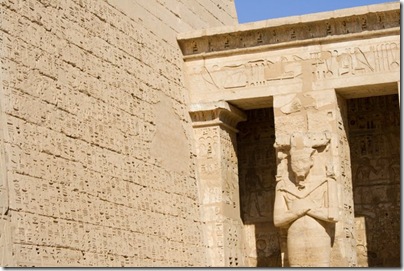 Unfortunately we didn’t have a lot of time at Madinat Habu because we had only rented our van until 2:00 and had to get back to the hotel. We would have liked to spend more time there. At the same time, we were dog tired and wanted to get back to the hotel to relax. We’d been tramping around ancient tombs and temples since 7:00 AM and we were wiped.

Next time we go to Luxor we will be sure to go to Madinat Habu earlier in our trip so we’re not so exhausted when we get there. I that since we found Madinat Habu so impressive even after being to several other impressive sites is further evidence of how amazing Madinat Habu really is.

Even Carolee, whose “history-span” is very delicate and short enjoyed herself immensely at Madinat Habu. And she was not on board when we initially decided to visit one more thing before heading back to the hotel. 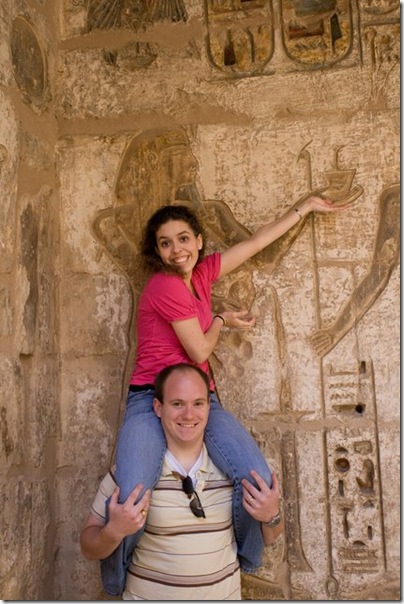 Rachel, having napped all while we were at Madinat Habu and in the van, was all napped out by the time we got to the hotel, so while everyone else relaxed in their rooms, we decided to try out the pool on the roof.

There were three little boys playing in the pool making the water look rather inviting, but when I stuck my toe in to test the temperature I began to wonder if the boys weren’t crazy. The pool was freezing cold.

“Come on! Get in!” they cheered me on in their beautiful little accents, “It’s not cold once you get in!”

“It feels really cold,” I said.

“But once you’re all the way in it’s not!” they insisted.

I sat on the deck and put my legs in the pool. They agreed with my big toe. The water was cold.

“Hi!” said a little boy, coming up to Rachel and me.

“Where are you from?” he asked.

“Where are you from?” I asked.

“Are you going to get in?” he asked again.

I’m a sucker for accents, I guess, because I ended up in the pool. But only for a few minutes. 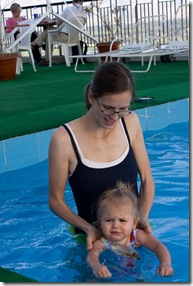 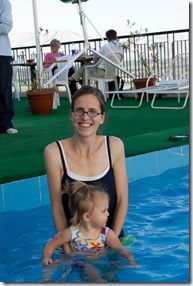 Andrew watched, laughing, while Rachel and I tried our very best to “get used to the water,” something that was only supposed to take “a few minutes.” We gave it our very best shot but ended up shivering with goose bumps, so we got out.

He had come up to the roof with us, in his swimsuit, but suggested that he take some pictures of the view while we tried out the water. Isn’t he chivalrous? 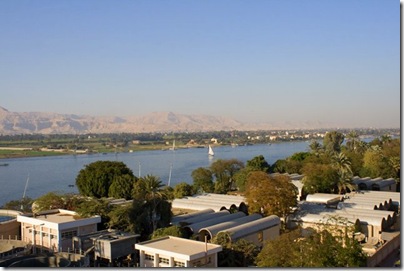 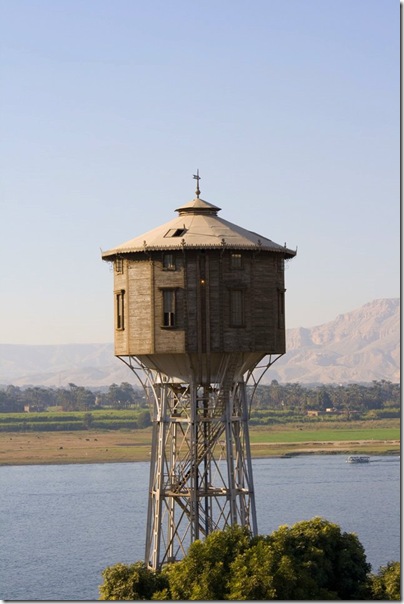 We ended up moving our pool party inside to a steaming hot bath, leaving the little Irish boys with the icy cold pool all to themselves. Rachel and I found it a little squishy, but much more pleasant! 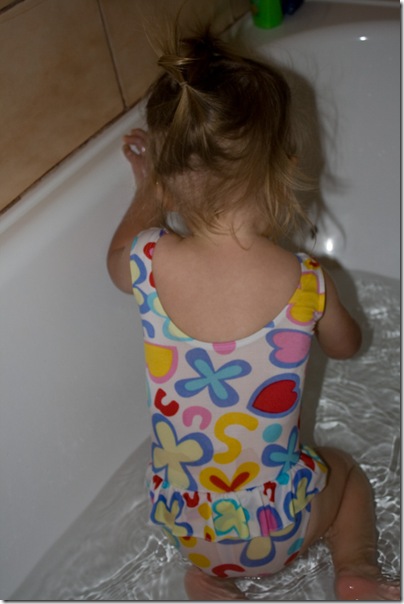 The day really wore her out, though, so even though she wasn’t ready for a nap when we got back to the hotel she fell asleep long before we expected her to at bedtime.

It’s hard to enforce bedtime when you’re on vacation. Sometimes we’d leave her alone in the dark (because that’s how she’s used to falling asleep) while we hung out in the Schilling’s room next door. Sometimes we’d turn off as many lights as we could do without and would sit quietly on the other side of the bed, hiding from her. And other times we’d put her in her crib with some toys and tell her to play until she wanted to go to sleep and then to just lie down.

This particular evening she conked out mid-imaginary-phone call. She’s too cute. 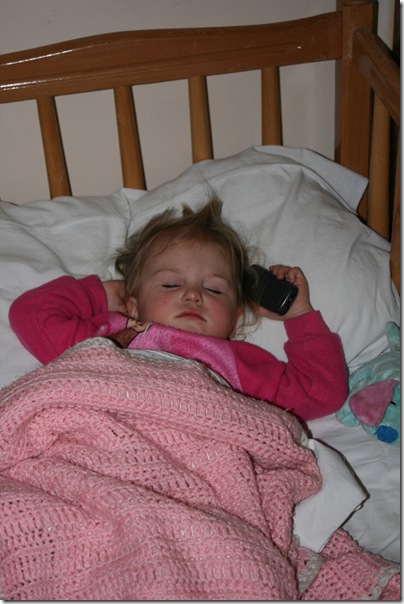