The train ride from Cairo to Luxor was a long one, that’s for sure. For some reason we keep leaving for trips late at night, thinking that Rachel will fall asleep. She never does, though, so we end up staying up all night long with her.

We didn’t want to fork out extra money for the fancy sleeping car, so we took the regular “sleeping” car, which was full of Arabs instead of tourists. I have nothing against Arabs, per se. I just don’t understand what they have against sleeping at night. Or why they enjoy listening to music (read: ring tones) on their phone at full volume, especially at 2 and 3 in the morning.

There was a baby down the hall and his parents weren’t putting him to bed, so it was nearly impossible to convince Rachel that this was a “sleeping car” and not a “party car.” This little boy kept visiting her, which was fine.

Eventually she tried to go visit him and learned that it was easier to crawl down the corridor while the train was moving. She kept falling over every time she stood up.

At the time I thought it was because the train was bumpy but now that I think of it, I could have been because it was 2 AM and she was well past tired.

The train pulled up to the station in Luxor at around 8:30 AM on January 3rd. Much to our surprise we found that we had slept for a couple of hours, which was nice.

Luxor is a tourist trap. If you remember nothing else, remember that.

The minute we got out of the train we were surrounded by taxi drivers asking us where we wanted to go. We found a guy who said he’d take us to our hotel, St. Joseph’s, for only 10 LE. We thought that was a pretty good deal…until we learned how close our hotel was to the train station.

We were too tired to make much a stink about it, though, and went into the hotel to see if they would let us check in 6 hours early. St. Joseph’s was a wonderful place to stay. They told us that our room would be ready in twenty minutes and to wait in the lobby. Less than twenty minutes later they escorted us up to our room, which had just finished being cleaned, set up a crib for Rachel and left us to relax in peace for a few minutes.

We were grateful that they let us check in early, but we didn’t want to waste our whole first day in Luxor so we walked down to the Luxor temple, which was just a 10 or 15 minute walk from our hotel. Andrew and I kind of knew the way because we had stayed at the Pyramisa hotel, just a few blocks away from St. Joseph’s, when we were in Luxor a few years ago. After walking the wrong way for a while I convinced Andrew that we weren’t going the right direction and we turned around and found the temple in no time. 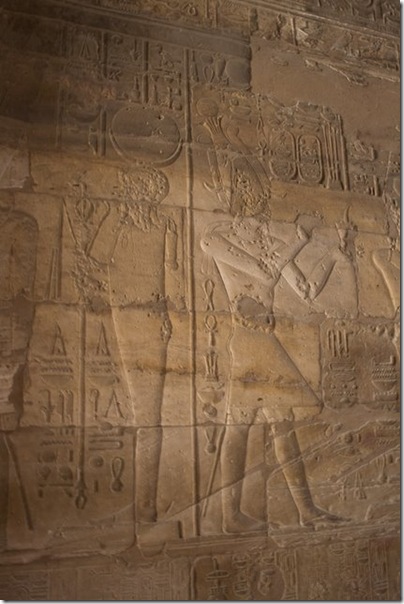 The Luxor temple was much more pleasant this time around. The weather in Luxor is much nicer in January than in July! We were happy about that. It made it much easier to focus on exploring the temple. Last time we were so focused on not passing out that we forgot to enjoy ourselves. 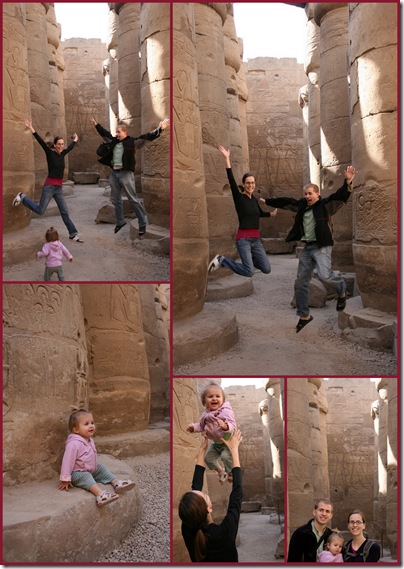 Rachel wasn’t too impressed with the Avenue of the Sphinxes. 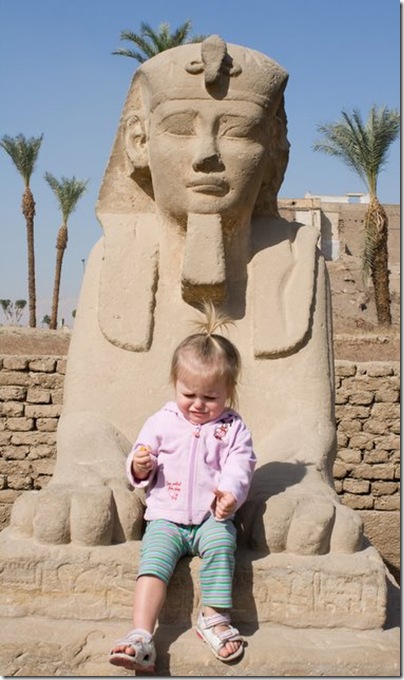 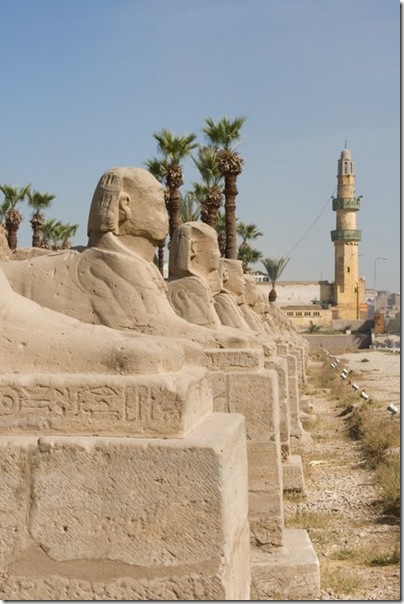 Eventually Rachel warmed up to the idea that there were going to be statues of strange half-people-half-animals everywhere and spent the rest of our time at the temple running around and picking up various rock samples. 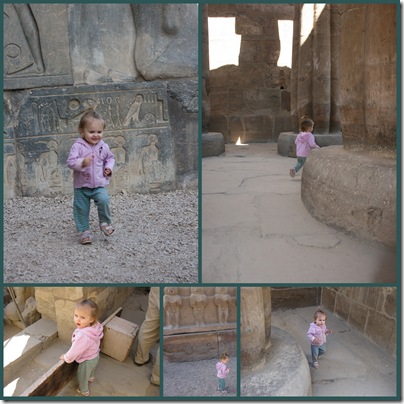 It was interesting to go to Luxor temple a second time because we noticed many more things than we had noticed the first time. For example, a beautiful stucco done by the Romans in 200 AD covers the original relief done by the ancient Egyptians in the sanctuary of Amun. We completely missed that last time. It was an interesting contrast to see. 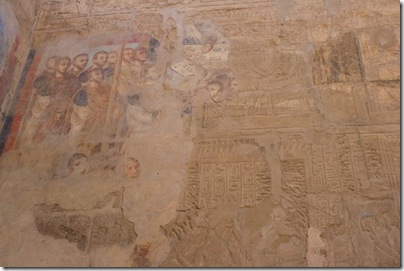 We also had to visit some old memories, like that place on the wall that the guards tell everyone to rub for good luck. I was the only one who would touch it. Out of 5 people you’d think a few would touch it. Everyone else thought it was too unsanitary. It’s not like we hadn’t brought hand sanitizer with us. Sheesh. I guess I’m the only lucky one. 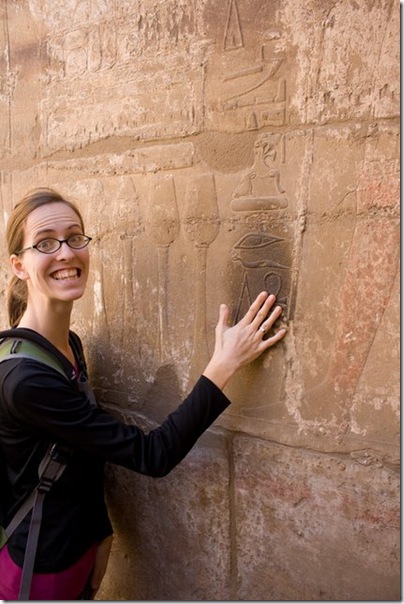 Soon Rachel was getting a little grumpy. We hadn’t really eaten anything except snack foods since the day before and were in desperate need of brunch. We waited to take a family picture until after she had lost it just so we could say that we took her to Luxor and all she did was cry. 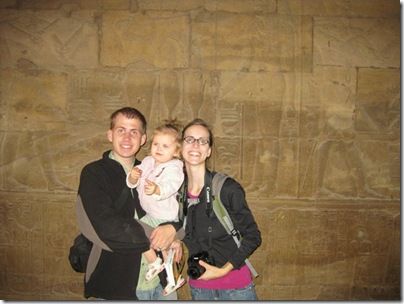 We left the temple complex, dragging our screaming child with us, and then tried to decide where to have lunch. The Schillings and David were with us and everyone had their own opinions about where they wanted to eat so it took us a while to decide. Soon we found a cheap falafel stand and ordered a bunch of sandwiches, sat down in a park facing the Luxor temple, and enjoyed the spring-like weather while filling our neglected tummies. And then? Then we walked back to the hotel, collapsed on our beds, and took a long (and lovely) afternoon nap. 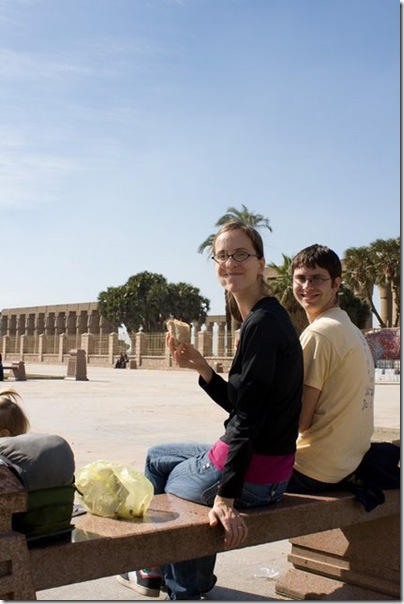