Invisible Chili and the Newlywed Game

For Valentine's Day our branch had a chili cook off. It wasn't exactly my idea of a romantic evening, but it sure was fun. The priesthood was in charge of cooking the chili--the women weren't even allowed in the kitchen. There were some pretty good entries, but Andrew's was above and beyond them all. 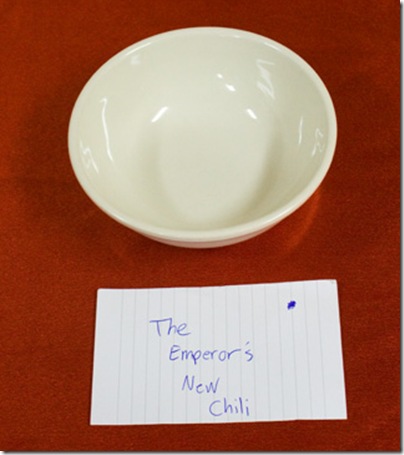 I can’t believe we didn’t win. Clearly the judges were either stupid or not fit for their position since they weren’t overwhelmed by the piquant taste of the Emperor’s New Chili.

Andrew even had to get up and explain why his chili was the best. I don’t think he would have entered if he knew he had to do that. 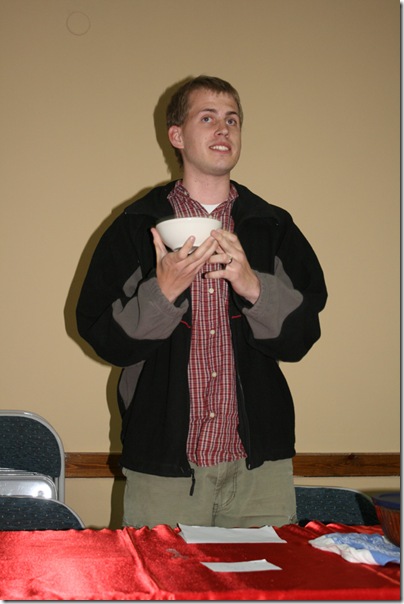 We weren’t really smart and sat behind the pillar, so Carolee and Melissa went up to the stand so that they could watch everyone give their presentation. Rachel decided she wanted to be one of the girls. 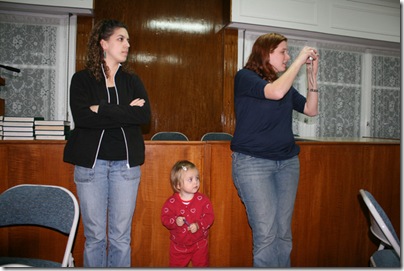 Here are some of the entrants:

Andrew with the Emperor’s New Chili; Dan with a sweet chili that had some Welsh name that took him like 5 minutes to say and that I have no hope of transcribing here (Dan is Welsh); Patrick who entered Adam’s Chili (he “found” the recipe in some Joseph Smith papers); and Eric, who served up Toro something-or-other (beef with salsa). 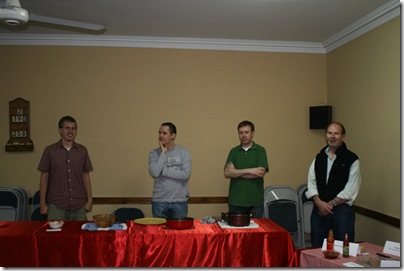 Dan won the popular vote. Harri won the most flavorful. Patrick won for the best presentation. All we got were a few laughs, and a big round of applause. But that’s alright because we did win the “Newlywed” game.

I had to fill out a card with questions and Andrew had to guess what I put down. The McCallisters and the Levanans also participated. The questions were a little off the wall, and very similar to the survey about my father-in-law that his co-worker put up online.

2) What was your first date together?

3) What was your first fight about?

4) If your spouse was a superhero, what would they want their superpower to be?

At the end of those questions we were tied with the McCallisters with 2 points each (although, technically we didn’t ever get to answer the fighting question because Patrick was holding our card when Harri answered and he gave our answer away) so we had to do a tie breaker question:

5) If your spouse was a shoe, what would they be?

Both Linda and Andrew answered that one correctly so we had to have another.

6) If President Obama’s stimulus package involved giving $10,000 to each person, what would your spouse buy?

Both Andrew and Linda got that wrong, and since we didn’t want to go into triple overtime we decided that we were both winners. Melissa will be making us cookies. Melissa makes some good cookies, so I’m excited.

Andrew got 3/6 questions correct about me. Do you think you can do better?