She needs another hug (or "Farm boy, fetch me that pitcher.")

The night before Emily's wedding it started snowing. It snowed and it snowed and it snowed. It snowed all night long. When we got up in the morning it was still snowing. Power was out in parts of Provo and Springville. There was more than a foot of snow outside.
We started wedding preparations, anyway. Emily's friend Monica came over to do her hair and makeup. 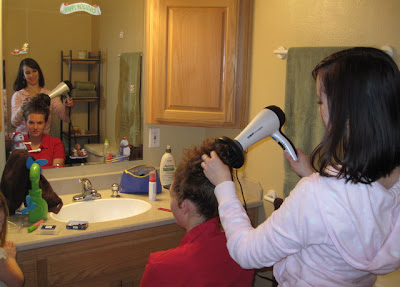 Rachel watched with wondering awe the whole time so Monica offered to do Rachel's hair, too. Both girls ended up looking beautiful, though Emily was absolutely glowing. We were the last ones to leave the house—we were a little nervous about getting to the temple on time since the roads in Orem were so bad but once we were on the highway things cleared up nicely and we had no problem. 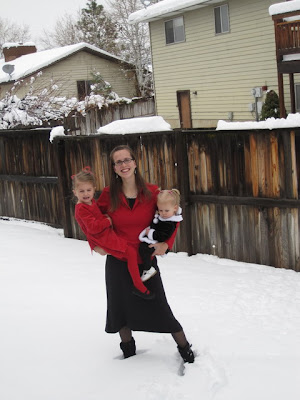 Things were actually worse on Monday, the day Emily got endowed, when we had to drive up to the Salt Lake Temple. The temple is only open for one session on Monday and it's an early morning session so we had to leave the house super early but we couldn't leave until our babysitter arrived and she ended up getting to our house a little late because she hadn't realized that it was storming out. We ended up making it on time and it was wonderful, of course, but rather cold and stormy.
That's what you get with a December wedding though!
Yesterday it snowed a lot more and was rather chilly but by the afternoon it really wasn't too bad. The only hiccup (besides everyone south of Utah county not being able to attend on account of the snow) was that Morgan's name was spelled wrong on the marriage license. His last name was spelled "Graner" and no one who looked at it even noticed—his dad looked it over and gave it the okay, Emily and Morgan thought it looked fine. It was the sealer, a complete stranger to the family, who noticed the mistake. "Isn't your name Craner?" he asked.
The sealing was beautiful. They were supposed to be sealed by Reid's mission president—Reid and Karen got married in the Jordan River temple and were sealed by Reid's mission president, which is why Emily chose the Jordan River temple in the first place—but he was sick so we had a substitute. He was wonderful. He talked about how it is important for a husband and wife to never speak ill of each other, and told Emily and Morgan that millions of prayers had been offered on their behalf (beginning even before they were born) and how the blessings they have now are due, in part, to those prayers of their parents and loved ones. He told them to begin praying for their children now, which is something I really hope they do. I know that we pray for our current children and our future children and I'm sure our parents pray for us, always. He also told Morgan several times, "She needs another hug. Don't ask why; just give her another hug." 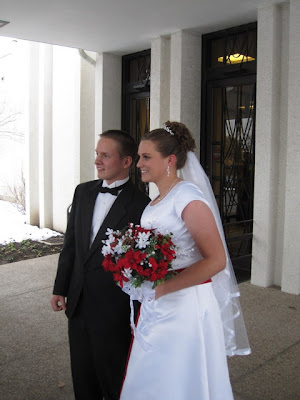 That was perfect advice for Morgan on how to care for Emily. She is a girl who needs a lot of hugs.
We took pictures outside in the freezing cold. I made sure to grab a family picture since Rachel actually had her hair decently coiffed and I thought we should preserve the moment. 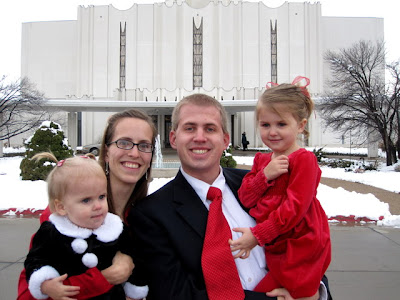 Then Emily and Morgan took a picture with the girls. 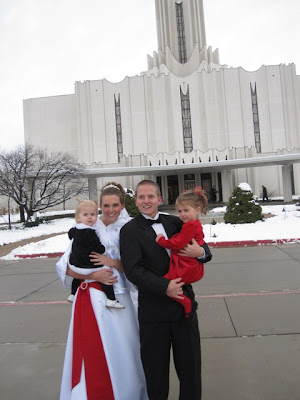 Morgan's sister, Buffy, watched them while we were in the temple. She had Rachel call her Aunt Buffy since Morgan is now Uncle Morgan and Buffy is his sister it was just easier to have Rachel call her Aunt Buffy than explain why Morgan is her uncle and Buffy isn't technically her aunt.
Later, at the reception, Morgan's Aunt Brenda came up to me and pointed at Rachel.
"So," she said, "Is that little girl Emily's?"
"No, she's mine," I said, "But she looks just like Emily did when she was a little girl!"
"Oh!" sighed Aunt Brenda, "Buffy told me how she's excited to have a new niece and introduced me to Rachel. Everyone told me what a sweet, innocent girl Morgan was marrying and I just couldn't figure out why no one told me she had a baby! I was so confused."
"No, no, no. She's all mine."
That was probably one of the most awkward conversations I had at the reception. There were many happier, less-awkward conversations, too. Morgan's brother proposed to his girlfriend just after we finished taking family pictures. She said yes. 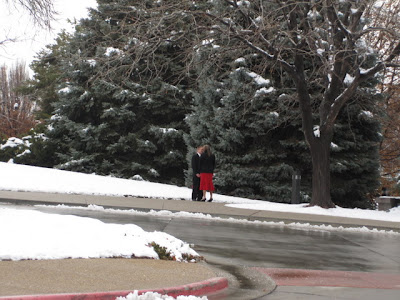 We had Emily and Morgan take pictures with some "thank you" signs to send out as their thank-you cards for their gifts. 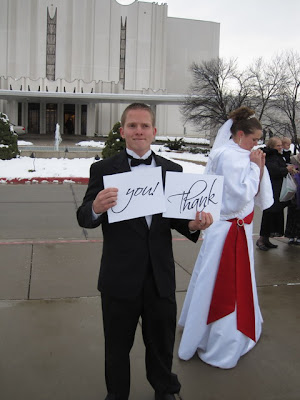 I think the official photographer had them lower the "you" sign so that it looked better aligned—we just snapped a few quick pictures with our camera so that we could make a draft of the thank-you card. 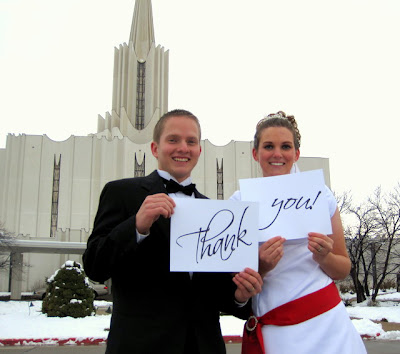 The reception was beautiful. Emily had selected an assortment of winter treats: popcorn, donut holes, gummy bears, candy canes, hot chocolate, marshmallows, mulled cider, chocolates, and nuts. There was a steady stream of guests and Emily and Morgan just looked so happy. 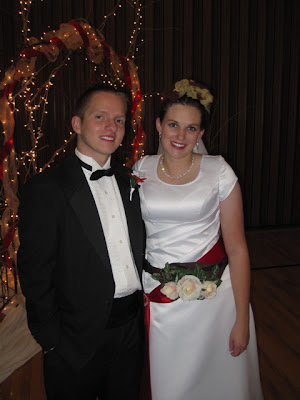 Emily had to take a few pictures with her hairnet bow and wedding fanny pack that Aunt Nicki gave to her. It put the "class" in "classy." 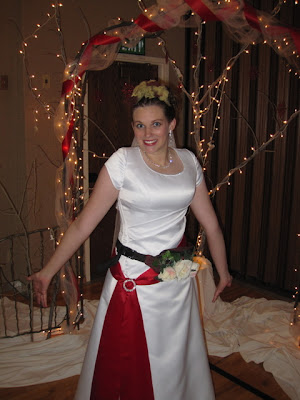 It's hard to believe Emily will be moving so far (three hours) away. We're going to miss her, but she'll have fun on her farm, I'm sure. 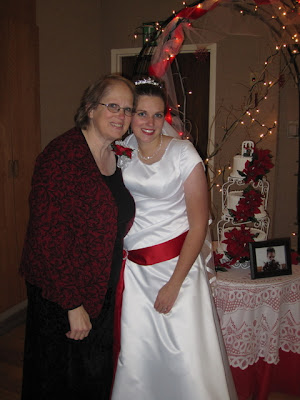 She's not technically moving to a farm, but she is moving to the middle of nowhere. Not that there is anything wrong with that. We've just been teasing Emily about that since we first dropped her off at Morgan's house four months ago—she swore he lived in the "city" yet there he was waving to her from the door of what was clearly a farmhouse.
"It's not a real farm," she kept telling us. "His parents are school teachers so it's not a real farm. They're not farmers. They're teachers."
On Monday night Steve Gillespie came over to "interview" Morgan and I interjected with the question, "Do you live on a farm?"
"What do you mean—where I live now? No, that's not a farm."
"Your parents' house then. Is that a farm?" I asked.
"Yeah, I hear you lived on a fake farm," Steve said.
"Hey! What are you calling a fake farm?" Morgan gasped.
So there you have it: Emily married a real farm boy (though I suppose he's technically a "recreational" farm boy). Emily doesn't mind though. Like I said, there's nothing wrong with being a farmer.
Posted by Nancy at 12:38 AM