Yesterday Andrew and I gave the Brown Paper Bag Presentation at the HBLL—it's just an informal lunch gathering where someone (hopefully someone interesting) comes to talk to any employee who wants to share their lunch hour. We had a decent turnout but only because so many people in the library love us; it's like our second home (and I'm not even kidding).
We talked about Egypt, which was naturally fun for us. I hope it was as fun for everyone else.
When we were finished I took the girls to the Bean Museum to waste away the afternoon while Andrew attended his afternoon classes. The museum was crawling with young mothers and little children doing exactly the same thing. It was fun! 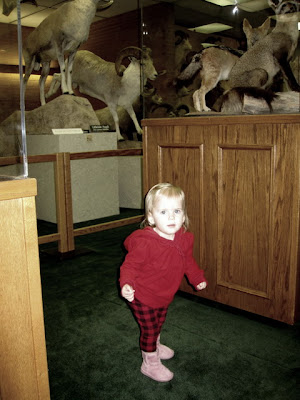 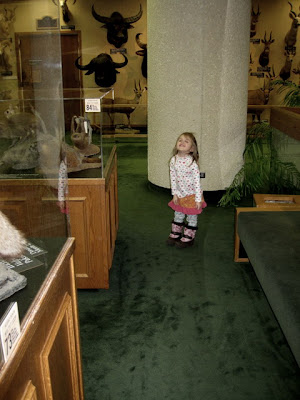 Don't you love Rachel's outfit? She's been dressing herself lately. She has on blue pants with multi-coloured daisies, an orange skirt with pink flowers and trim, and a white shirt with multi-coloured hearts on it. And don't forget the boots.
She's rocking the fashion world—contrasting patterns are in, right?
It doesn't matter when you're three because, at least according to my three-year-old, if you have a skirt on you're naturally trendy. 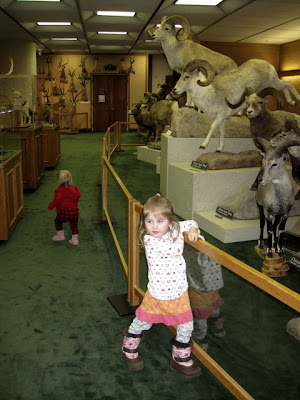 Miriam loved the glass barriers on the second floor, probably more than anything else in the museum. 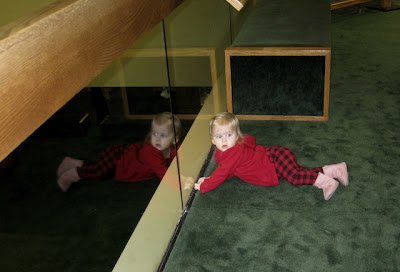 It was a fun little afternoon jaunt. We met daddy in the Tanner Building and rode home together—I thought for sure Miriam would fall asleep since she hadn't napped all day, but she didn't. And then Andrew forgot to turn the lights off when we went inside the house.

When he took the trash out to the curb (at 12:30 AM) he noticed the car was clicking. At first he was worried that we were being tracked by the FBI or that someone had planted a bomb on our car, but then he realized that he was only being slightly paranoid and it was the battery making the clicking-sound of death. We decided not to fix it last night—since it was past midnight there wasn't much we could do—and had quite the time getting parking sorted out this morning.

Andrew borrowed his dad's car but couldn't register it for parking because his dad already has a bishop's parking permit. They were so rude to Andrew and told him to either walk or rent a car because there wasn't anything they could do. I think surliness is a requirement to work in a parking office. I called in and explained the problem and got it all sorted out. I think.

We had to buy a new battery for the car, unfortunately. It was a costly mistake but at least we didn't get a parking ticket on top of it all!
Posted by Nancy at 10:36 PM