March has already lulled me into a false sense of spring-security. I'm so ready for it to be spring and today was beautiful, but I'm well aware of the saying "in like a lion, out like a lamb" and I'm sure things will change before we get to the end of March. Last year it was still snowing in May, so I'm told. Still, today was beautiful and we're supposed to be in the fifties for the rest of the week.
Today Andrew had to shoot some scenes for a training movie he's making for his human resources class. His group shot most of it on campus but there were a few shots that they couldn't film there so I was volunteered to help finish the filming. I'll have to post it when it's finished—Andrew wears a kleenex beard in the later scenes so it's kind of a must-see flick.
We went to the park to finish filming. I let the girls run off to the playground while we set up our equipment around a model pioneer home. The playground was quite a ways away from where we were but I could see the girls and hear the girls, though it didn't seem like they could hear me.
"Mom! I just went down the slide on my tummy!"
"Cool!"
"What?"
"Cool!"
"What?"
"COOL!"
"What?"
Rachel gave up trying to hear me and ran the whole way over to me. Panting, she asked me again.
"What?"
"That's so cool that you slid down the slide on your tummy."
"Oh. Really? Okay. I'm going to go do it again!"
"Have fun."
"What?"
"HAVE FUN!"
"What?"
"JUST GO!"
"Oh. Okay!"
When we were finished filming over there we went to the junior high school to do a bit of filming. There's a big hill and a field with a view of the mountains. There was also a soccer team practicing and a whole lot of mud. I let the girls run amuck (literally, a-muck) while I filmed Andrew twirling around in the field. While the girls were left to their own devices they discovered the runoff from the melting snow. 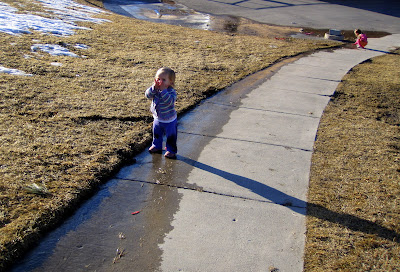 Miriam was thoroughly enjoying it—splashing in it, sitting in it, drinking from it—though Rachel was much more careful about her play. Miriam's pants were drenched and plastered with mud. Rachel was concerned because she got a drop of mud on her pants. You can see her in the top right-hand side of that picture—she's in pink (surprised?) and is not in the water, though I think she did find a stick to poke it with. Miriam was having a heyday. 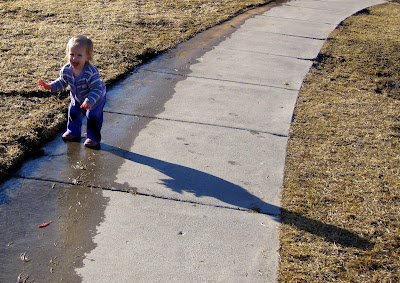 We packed up the girls when we finished filming and headed home. When we pulled up the driveway Miriam got all flustered.

"It's so nice outside!" I said, "You girls can play in the backyard while I make dinner, if you'd like."

Both of them bolted from the car, ran through the house, and were in the backyard before I could even blink. Miriam mastered stairs last week so now I can relax about having her play around the stairs—she is super careful and turns around to crawl backwards several feet in front of the stairs—inside and out. We opened the blinds and let the girls go wild while I made pancakes and Andrew did homework (surprised?). I checked on them every few minutes, just to make sure no one was bleeding or unconscious or in a chokehold. Once when I opened the door to peek around the corner of the house because the girls were out of sight, Rachel called out to me.

"Mom! We're fine! Can you just leave us alone and let us play?!"

A nice romp in the fresh spring air is good for everybody.