Andrew's aunt Nicki just posted on facebook, in a mortified tone, that she has a mouse living, eating, and pooping in her pantry. We also had a mouse living, eating, and pooping in our pantry and we didn't even discover it until the closet started smelling funky.
There was a big bag of bird seed in the pantry and somehow it got a hole in it and the seed spilled all over so we cleaned it up and got rid of it, thereby cutting off the food supply for our own little mousy (who we assume was somehow of the hole in the bag). When the mouse no longer had any bird seed to eat it must have found some of the mouse poison that Grandma keeps hidden deep in the depths of a cupboard the girls don't play in and then found his way over to the entryway closet to die.
Pretty soon the closet started smelling of...dead mouse...but we blamed it on Grandpa's racquetball socks.
"It's not my socks!" he insisted, "It smells like something curled up and died!"
Once he said that no one was keen on accepting the unsavory task of cleaning out the closet to find out what died and where. So Grandpa told Andrew that he'd take the whole family out to dinner if Andrew found the dead critter in the closet. Andrew can't say no to good food so he quickly found the mouse, hidden behind coats and shoes. Ew. 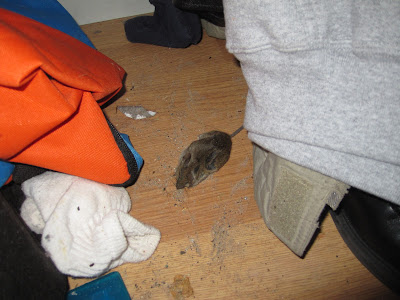 I had seen him once, I think, late at night when I went into the kitchen. I brown blur ran past me and into a crack by the dishwasher and the cupboard but I thought to myself, "No. That didn't just happen. It's just late at night and I'm jumpy."
It really did happen though because soon after we found this mouse we started seeing signs of another mouse. Grandpa opened the cupboard above the fridge and a mouse fell down and ran into the same crack between the dishwasher and cupboard. Andrew went into the kitchen to get a drink of water from the fridge and a mouse ran out from under the fridge and into the living room. We kept seeing mice everywhere, all the while hoping it was really just one mouse.
Eventually Grandma decided enough was enough and she ran to the store to pick up some mouse traps. She got a "humane" kind where the mouse has to push down a lever to enter into a box we had filled with yummy Pirate Booty. I know they like that because once Rachel and I were sharing some as a snack and she poked her finger into a hole and said, "Hehehe, there's a hole in the bag."
I choked and said, "Let me see that hole!"
It was definitely a mouse-chew hole so I made her throw away all the popcorn in her bowl and immediately began to feel sick to my stomach—I had just been eating something a mouse had walked all over! Could life get worse?
Don't answer that.
Anyway, Grandma also put out some sticky traps and set more mouse poison around the house (again, in very hard-to-reach places that I am very diligent about not letting the girls around).
The instructions on the package say to check the traps every day or when you "hear noises." We've been checking them daily and haven't seen hide nor hair of mice since putting them out. We also haven't smelled any decaying mice, so they haven't been into the poison, either.
The only thing we've managed to catch is a stray tennis ball. Rachel agonized over this for days until she found another tennis ball somewhere else in the house. Now everything is fine again.
For Rachel, I mean, because the tennis ball is still stuck like a...mouse in a trap. 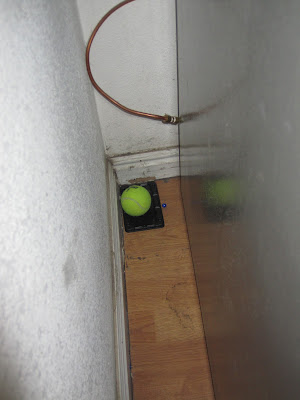 Perhaps the mice just decided to move back outside because spring came. Wouldn't that be nice?
We went to the library a few days ago and checked out a billion new books, once of which was Jazzmatazz! by Stephanie Calmenson (illustrated by Bruce Degen). I wasn't sure I was going to like it because from the cover it looked like it was going to be just another story about a baby banging on pots and pans. Yippee.
But we all know you can't judge a book by a cover and the story ended up being much more clever than I thought it was going to be, and the pictures were darling. It's a cute poem about a mouse that invades a house in the winter, runs across the piano keys, and gets everyone in the house to join into the music.
My girls loved the jazz beat of the poem and all the featured animals.
My favourite part was the story behind the story in the end of the book. The author and illustrator of the book were chatting online:

Bruce [the illustrator]: The field mice are coming into our house to get warm.
Stephanie [the author]: City mice do the same. I squeak—I mean, speak—from experience.
Bruce: Speaking of squeaking, last night a mouse ran across my foot while I was washing the dishes, then ran under the piano!
Stephanie: Train the mouse to run on the piano—and play jazz!
Bruce: Therein lies a children's book.

So, not only was the book adorable, it was historical fiction—my favourite genre. We never do find out, though, if the mouse leaves the house so unfortunately for Aunt Nicki it wouldn't be a very practical book to read. But perhaps it would cheer her up a bit...
Posted by Nancy at 11:33 PM