Dinner with the Greats

We went to dinner at Grandpa Frank and Grandma Sharon's house today. Grandma Sharon has been working on cross-stich baby announcements for the girls; it's something she did for each of her grandchildren (Brock, Grant, Lindsey, and Dana) before she married Grandpa Frank and inherited a whole gaggle of grandchildren (well, nine more, anyway). She decided when Rachel was born that she would continue the tradition with her great-grandchildren and began working on Rachel's birth cross-stich right away. And then Kayl was born. And then Miriam. And then Talmage. And Grandma Sharon began to realize she may have gotten herself into more than she bargained for. 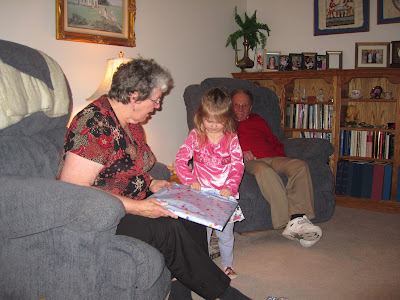 She recently finished the cross-stitches and invited us over for dinner so that she could present them to the girls. You can see Rachel's is quite elaborate. 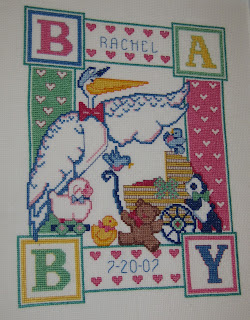 Miriam's is a little simpler and is about half the size, which is just as well because if Rachel gets her way I will be having twins any day now* and then Grandma Sharon will be up to her elbows in needlework once again. 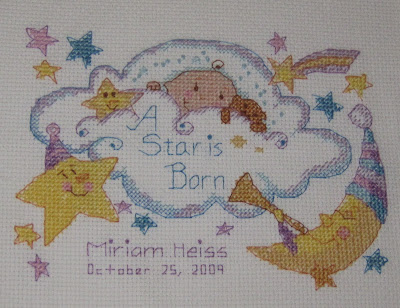 Both girls loved their cross-stitches. Miriam kept kissing the baby on hers and Rachel fawned over all the animals on hers. They're excited to put them up in their room. Well, Rachel is excited. Miriam is a little oblivious to such trivialities as "the future" and has already forgotten her cross-stich exists but I think she'll be happy to see it on her wall nonetheless.
The girls were amazingly charming and I think that made Grandma and Grandpa very happy. I was surprised because they were both so clingy today (Rachel even had to be carried out of sacrament meeting screaming, "I want my mommy!" after I left to nurse Miriam; it was rather embarrassing).
Grandpa Frank brought out a train that he had made—it's the prototype for all the trains he makes. He's been making trains like this to give away to needy families at Christmastime for a while, apparently. We had brought a few of our toys along with us because Grandma and Grandpa don't have many toys at their house—among our toys were some wooden cars.
"I didn't know that girls liked to play with cars!" Grandpa exclaimed.
And that's when he brought out the toy train. Rachel loved it.
Grandpa showed her his model trains and she loved that, too.
He showed her his rockets and airplanes and she loved those, too.
Grandpa is just a boy at heart and Rachel is certainly a tomboy (with an acute fascination with the colour pink). 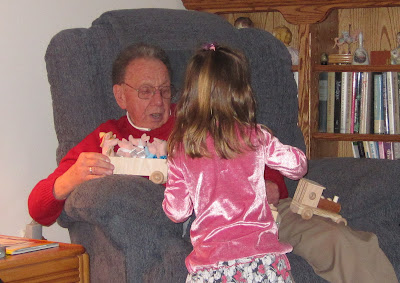 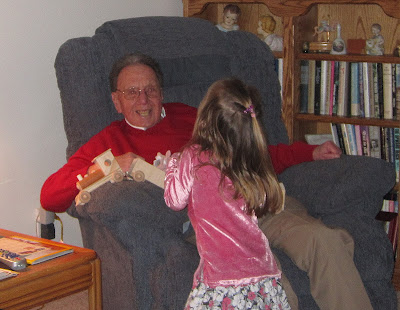 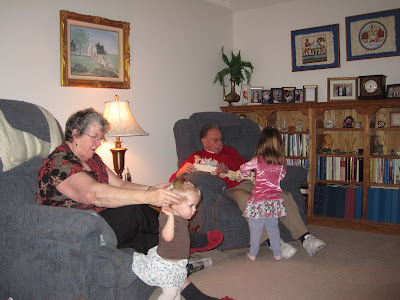 Dinner was good, too. Grandma Sharon made baked macaroni and cheese, which I don't believe I've had before (at least not in a long time). Rachel thought it was hilarious that Grandma put cereal (corn flakes) on top of the macaroni and cheese (even though that's a relatively normal thing to top a casserole with, at least in North America).
Miriam sat in a regular chair all by herself and even though the table came up to her eyebrows she did her best to use her silverware. It was rather comical to watch but she did a mighty fine job, given the circumstances. Next time we go over we'll have to remember to bring a booster seat.
Grandma served ice water in a pitcher fashioned after a kendi—a jug with a round body, tall neck with an open mouth, and a spout on the "shoulder" of the body. I filled my glass using the shoulder spout a couple of times without any mishap but near the end of the meal when the pitcher was nearly empty I ran into a bit of trouble. I was tilting the jug but hardly anything was coming out so I tilted it a bit  more and still nothing came out so I tilted it a bit more and then water started pouring out of the top of the pitcher instead of at the shoulder spout, which was clogged with ice.
Unfortunately the top of the pitcher was aimed at the macaroni and cheese so I ended up soaking Grandma's beautiful casserole.
In retrospect I probably should have been pouring using the top of the pitcher the whole time. It was terribly embarrassing...but it was my first time using such a vessel so I think I can be excused this time.
* Yes, she's upped her request from one baby brother to twins. I told her I'd see what I could do. Haha.
Posted by Nancy at 11:24 PM