Misadventures on the highway

Fifty years and ten days ago my mom's cousin Mary married the love of her life. Today Mary's children threw a party to celebrate that day and we were invited. At first Rachel didn't want to go because she was watching a basketball game and "jimmering" off the couch, making a lot of "goals."
Clearly the girl knows nothing about basketball—BYU wasn't even playing and one makes baskets or points or something in basketball, not goals...right?—so it was pretty easy to convince her to go to a fancy party, complete with desserts.
Me: But we're going to a party!
Rachel: Will President Obama be there?
Me: Uhhh...no.
Rachel: Aw, nuts.
Me: But there'll be dessert!
Rachel: When do we leave?
Miriam: O-ba-ma. O-ba-ma. O-ba-ma.
So, we got all loaded into the car and zipped on down to the freeway. We were just merging on when a truck just about creamed us. For some reason he was moving over into our lane—the merging lane—moments before it ended. I don't really know what he was thinking but he seemed rather annoyed that we honked at him.
About fifteen minutes down the road there was a click and a clunk and a rattle and a bump. Andrew limped our wheezing car to the side of the road, rattling like a maraca.
"What did we hit?" Rachel shrieked.
"Nothing. The car just died," Andrew told her.
He stopped the car and steam immediately started billowing out from under the hood.
"Are we dead?" Rachel asked.
"No, we aren't dead," we assured her.
"Are we going to die?" she asked, her volume and pitch rising exponentially with each word.
"No, we aren't going to die."
Andrew opened his door and smoke started filling the cab of the car. I thought for a minute that the engine was on fire and made a mad dash to hurl my children out of the backseat before it exploded. You know, like on the movies.
Moments before I chucked Miriam, car seat and all, into the ditch, Andrew (who had managed to open the hood) called time-out.
"The engine's not on fire!" he yelled to me over the sound of traffic rushing past.
"Oh, good." I joined him under the hood. "What's wrong?"
"Well," he said, "Something..."
Clearly we know nothing about cars. So we did the only thing we could.
We called his dad, who told us to sit tight and he'd figure something out. Parents are awesome.
We got back in the car to calm down our screaming children, who apparently still thought we were in a life-or-death situation. We couldn't think of anything entertaining to do (the Magna-Doodle had lost its appeal and the toys the girls brought along suddenly seemed boring in light of all this trauma) until I remembered that I had stuck the camera in the diaper bag. My kids love taking pictures and then looking at them right away. So that's what we did. 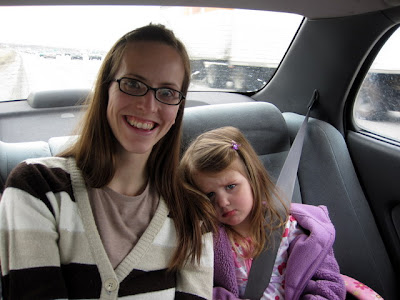 Rachel refused to smile so I frowned with her, which she thought was funny so her frown turned into more of a smile-frown than a regular today-is-just-not-going-my-way frown. 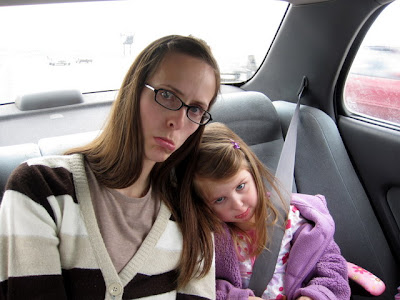 The funny thing is that as melodramatic as she was when she thought we were all going to die, she was even more melodramatic when we told her we weren't going to make it to the party, after all.
Clearly not going to a party is a fate worse than death.
"I'm just so sad about not going to the party," she'd wail every time we told her to take things down a notch.
Miriam was, for the most part, clueless. I think all the noise and ensuing hubbub made her nervous and then she was annoyed about being stuck in her car seat but not having the car move. Luckily she brought along her thumb. 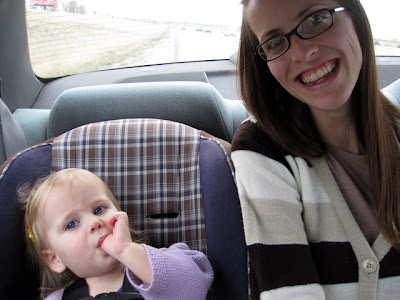 I made Andrew get out and take a picture of our poor car stuck on the side of the road (since he wasn't squashed "backseat, middle, feet on the hump").* 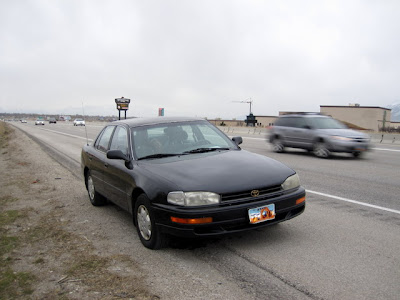 This could very well be the last picture of our poor car.**
We left a note in the windshield saying that we knew we abandoned it on the highway when you technically aren't supposed to do that but that we really didn't have much of a choice. Then we wished her luck and took off in our escape vehicle (ie. Andrew's dad picked us up).
Later, Andrew drove back with a neighbour who owns a trailer and even knows a thing or two about cars (okay, so he's a professor emeritis of mechanics at UVU). Remarkably enough the engine started (sort of; in its own special I-wish-I-were-a-blender sort of way) and they were able to drive it onto the trailer instead of having to push it up the ramp.
Before they did that our neighbour took a look under the hood. He hemmed and hawed for a bit and then gave Andrew the diagnosis:
"Well, it looks like your crank shaft blew up and knocked off the oil pan and..." Andrew got lost in all the car mumbo jumbo but shook the haze off to catch our neighbour saying, "I'm 99% convinced that your engine is dead."
When Andrew turned on the car, though, and our neighbour heard the engine he said, "Okay, I'm now 100% convinced that your engine is dead. Not 99%. 100%."
Our engine basically exploded and then we ran over our own oil pan, which explains the sickening thud we heard right when the engine went shake, rattle, and boom.
We're missing various parts—besides the oil pan...and the oil, which is all over the freeway—and other parts are broken beyond repair.
And, to add insult to injury...remember that time Andrew left the lights on in the car and we had to buy a new battery?
That happened ten days ago!
Do you know how expensive car batteries are? Not cheap, that's how.
If we knew the engine was going to spontaneously combust ten days later we probably would have forgone buying the battery in the first place!
And I probably just shouldn't add that Andrew just gassed up the car on Thursday on his way home from school...sigh
Goodbye $3.33/gallon gas, goodbye brand-spanking-new battery, goodbye hunk-of-junk of a car...
* It could be worse, Brian Regan. You could have a car seat on either side of you. Do you know how bulky those darned super-safe things are?
** It's not likely we're going to fix this car. It's old, was purchased used, and in all likelihood getting a new engine would cost more than it's worth.
Posted by Nancy at 12:50 AM