This evening at dinner, Grandpa went around the table and asked everyone what they accomplished today. I said that we winterized the girls' bedroom—we put quilts back on the bed and took the summer clothes out of their drawers and replaced them with sweaters and pants. What I should have said was, "You mean when I wasn't cleaning up bodily fluids?"
I can't say what percentage of my day was spent cleaning up bodily fluids, but let's just say that Miriam went through 3 pairs of underwear and had 2 baths before I caved and stuck her in a diaper—and a disposable one nonetheless. It's not that she's un-potty-trained herself. It's just that she has a nasty case of diarrhea.
It's been no fun for anyone.
But we did get the girls ready for winter. Surprisingly most of their stuff from last year still fits them this year—it helps that everything was slightly too large last year, so maybe it's not so surprising that most everything still fits, after all—we just need to find Miriam a bigger pair of boots and we'll be set. She was so excited to wear her penguin hat again. She said, "Meme's like a pu-en-gu-in," as she waddled out the back door to play. 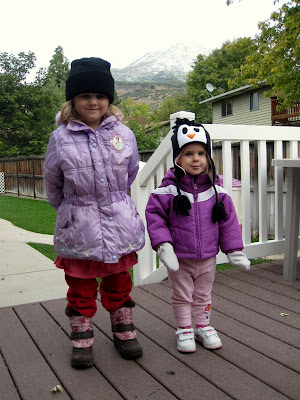 We dropped from 80°F (26°C) on Tuesday to 40°F (4°C) on Thursday. It was kind of a shock to our systems and we've been shivering for days now, it seems. It's supposed to warm up again, but only to the 60s (15°C, -ish), which is fine because that'll bring us some nice fall sweater weather.
For dinner we made homefries. Andrew suggested them. I made them—and that was all because I really couldn't think of anything else to go along with them. The girls helped smoosh them around in ziplock bags to coat them with olive oil and spices. 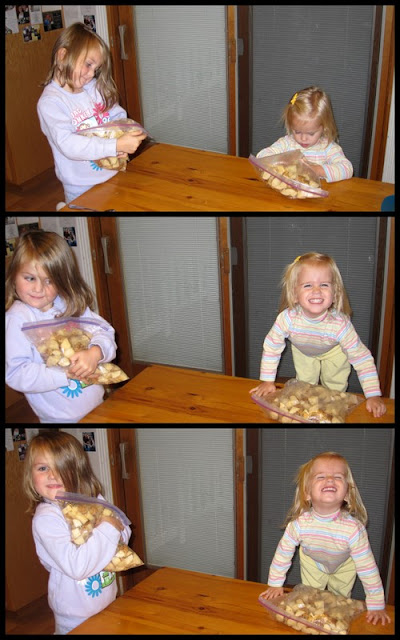 When people started kvetching about the boring meal I said, "What? It's Friday! Fry. Day."
"It must be an international holiday because it's French Fry Day!" said Grandpa.
Maybe one day we'll open up a French Fry Shoppe and our tagline will be "Celebrate Friday with us!"
Remember, you heard it here, first. Unless you heard it somewhere else first, in which case we aren't as original as we thought.
Posted by Nancy at 11:09 PM