My mom invited us to go to a play with her and my dad at the Valley Center Playhouse in Lindon. They always do a couple of Halloween shows that are cute and fun—we've been a couple of times but in no way would I call it a tradition of ours. Americans are pretty picky about what age children can attend plays and things so I went online to see if my girls would be allowed. I looked around their website for a bit to see what I could find out.
"Spooky fun for the whole family," they claimed. "Costume parade at intermission. Wear your costume to compete for prizes!"
That looked promising.
I checked the FAQs to see if it mentioned anything about children there. It didn't. So we decided we'd be safe to bring the girls.
The girls were so excited to get to wear their costumes. Let's be honest: they're always excited to wear costumes. But I was going to let them wear their costumes out, like out of the house, out of the yard, out of the neighbourhod, out on the town! What could be more exciting? Probably nothing.
I finished Rachel's Princess Leia "wig." It's more like an ear warmer with buns on the side but that was completely what I intended it to be—Halloween's going to be cold! I used a pattern for a headband I found online and then winged the buns. It turned out better than I expected, though Rachel was a little disappointed it was only a headband and not a full on wig. She got over that when she looked in the mirror though! 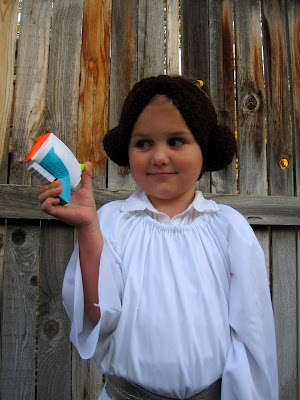 Miriam has been waffling between a couple of ideas. A butterfly. Dorothy. A pink princess.
Then, because Rachel had a wig, Miriam decided she needed one, too, and pulled out the old Rapunzel staple—a yellow scarf we got in Egypt for less than a buck. It's been tucked into many, many ponytails to add extra length since Tangled came out last year. 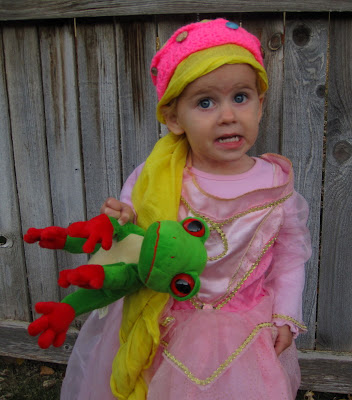 Because this is Halloween and we wanted her Rapunzel wig to be special, I twisted it all pretty and added some hair scrunchies. She was quite pleased with the results and wore it for hours today. 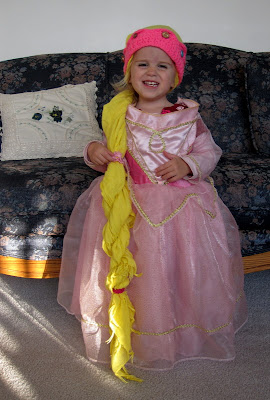 The crown keeps the scarf on her head and can also double as an ear warmer for when we're trick-or-treating next week.
And so that was that. We were set at like 5:00 and the play didn't start until 7:30 so we definitely had some time to kill. The neighbours patched up the fence this morning so our backyard was dog-free, which meant that I was able to convince the girls to go into the backyard for a little photo shoot.
I don't know how people ever choose only one picture to show—I narrowed it down, but come on! I love looking at the story the pictures tell as I'm coaxing my children to "Smile! Smile!" and "Look at the camera!" and "Tilt your chin up a bit!" They're so funny. And I seriously have no idea how professional photographers get children to look at the camera and smile naturally. That's just one reason I'm not a professional. Anyway... 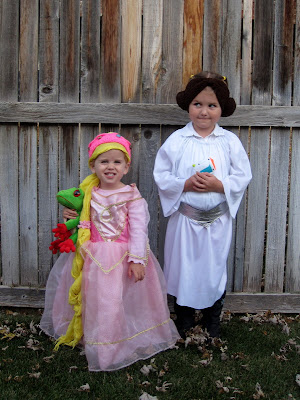 Miriam's holding a frog in lieu of Pascal, who is actually a chameleon. Rachel is holding a water gun in lieu of Leia's traditional "blaster." I just called it a ray gun when I was asking Andrew what it was called. He is currently mocking me. I'm not exactly what you'd call a Star Wars buff. Or fan. Or anything. 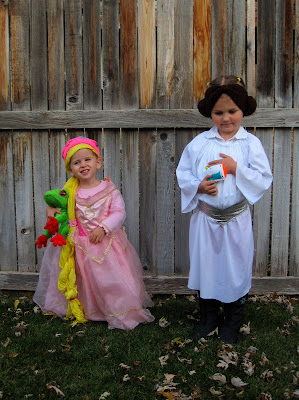 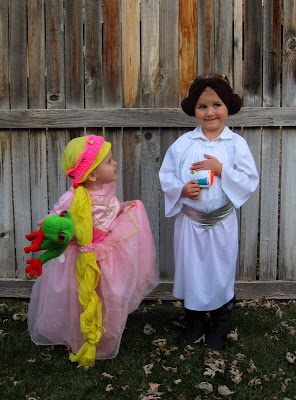 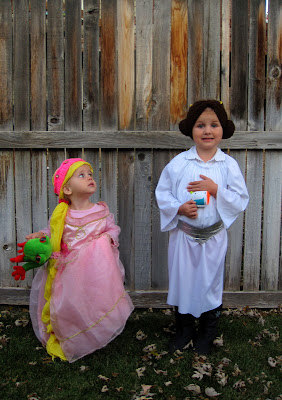 This is the sweetest—and perhaps unlikeliest (Rapunzel and Leia together?)—pair of princesses I've ever seen. 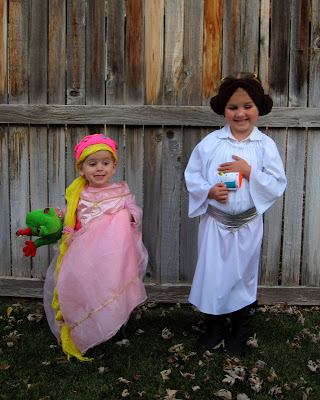 Rachel was like a statue. I tried to get her to strike a bold Leia pose. This is all I got: 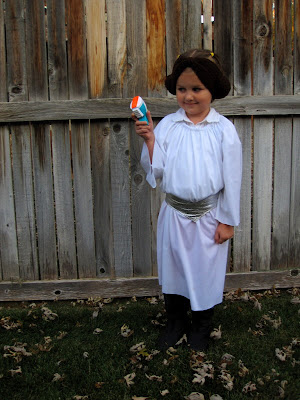 At least she moved her arms, right?
I love how Miriam has to hold up the dress to walk—it's huge on her (I use a hair elastic to gather it in the back so it doesn't fall off of her)—I think it makes her look very regal. When I asked her to strike a pose, though, she grabbed "Pascal's" hand and made him wave to me. 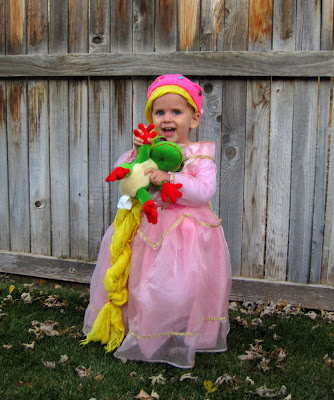 Then, since we had more time to kill, the girls insisted that I get out a costume for myself. I got out my shalwar kameez—it's from Pakistan but we bought it in Jordan at Global Village. I just couldn't pass it up. Besides, it's Diwali! You never know when you might need a special shalwar kameez for Diwali! 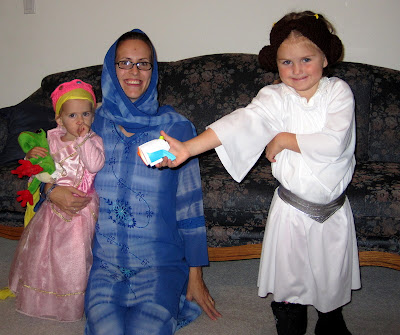 That mark on my forehead was my attempt at a bindi. I didn't have any red lipstick, though, so it's kind of brown instead, and I put it way too high. I have such a big forehead that I'm never sure where to stick it—technically it's supposed to go between, but a little higher than, your eyebrows. It's difficult to gauge "close to the eyebrows" when your forehead is like four inches tall. It's close...ish. 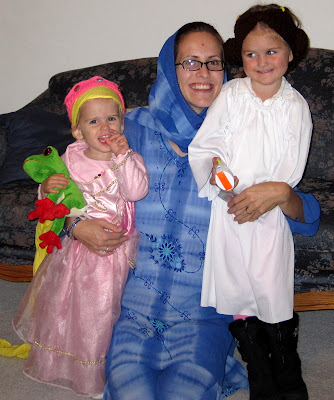 The Spanish Fork Krishna Temple is celebrating Diwali on November 5th and 6th. I kind of want to go—I haven't been since Andrew and I were engaged. Andrew was making fun of me (that's pretty much all he ever does) for wearing my shalwar kameez and dressing Miriam up as Rapunzel because our friends, the Palmers, in Sharja just did a post about Diwali and their daughter Magdelena is also dressing up as Rapunzel using a yellow scarf as a "wig."
I promise we're not copying everything you do on purpose—it's just that you're like, what, half a day ahead of us. Sheesh. Actually, I think it's kind of funny. It reminds me of The Office, where Pam and Angela are both planning on naming their babies Phillip and kind of cat fight it out about announcing it.
Anyway, Grandma surprised us by coming upstairs in her Halloween costume, too! The BYU ward is having a big Halloween party on Monday and Reid and Karen are going. Karen had a nun costume already so she found a priest costume for Reid to wear. The girls were excited to see her, although their excitement is not showing in this picture. 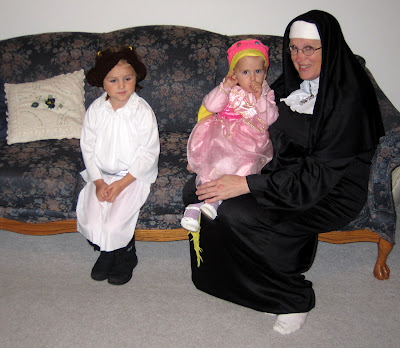 Well, it helped kill time until my parents came to pick us up at any rate. My girls were going crazy. But Naanii and Bumpa and Auntie Josie finally showed up and we left for the playhouse. When we got there, Sister Renstrom tsked her tongue and shook her head.
"No, no, no, no, no!" she said. "We don't allow babies."
"She's not a baby!" my mom insisted.
"Well, how old is she?"
"She's two."
"That's a baby. Our policy is that children under five can't attend our shows because they are too disruptive. They make noise and talk and cry and it makes people angry—at the mother, of course, but I get the brunt of it! So we don't allow children at all."
"I looked online and couldn't find anything about that!" I said. "It said it was a family friendly play."
"Oh, it is family friendly," she said (—just not for my family, I suppose—) then continued, "But our policy is firm. No children under five. It's printed right here in our program."
In the end I called Andrew and had him pick up Miriam to take her home. No one was very happy about this—she would have just sat on my lap and sucked her thumb the whole time. It didn't seem like Sister Renstrom was very happy about having Rachel attend, knowing that she was only four, but, frankly, Rachel behaved just as well as, if not better than, the cub scout troop that was in the audience, or the five-year-old girl who came with her family.
There were only twenty or thirty people there anyway since, in the words of Brother Renstrom, it was an "off day." They don't usually do plays on Wednesdays but since they have two shows running in Halloween they throw in a couple of extra nights.
Miriam took the disappointment like a pro, but I think the Valley Center Playhouse needs to change their policy. They are missing out on a lot of revenue—I know of several families who would probably take their whole brood out to see a play but who wouldn't dream of leaving half their kids at home to take the older kids out. And, in my opinion, if you call something "family friendly" it should be family friendly. But I also hold the opinion that infants have every right to scream their lungs out on a plane—just as much as my seat companion has the right to snore or the guy in front of me to let his seat back or for the flight attendants to try to feed me every half hour. My opinion is that if you take children to plays and concerts then they learn how to behave in plays and concerts. I also happen to know that adults are just as likely to talk through a performance as children are.
They could at least designate some performances as truly family friendly and others as children intolerant. I re-checked their website when I got home and, lo, on the "tickets" page it does say that children under four would not be admitted, it said nothing in the FAQs (which is where I usually look for answers to my questions) or on the main page, where it touts its "family friendly" atmosphere. Also, um, four. Not five. They can't even seem to decide what age limit their "policy is firm" about. Because their program certainly says five while their website definitely says four.
Anyway, we saw Shadowbrook Mansion and it was good. A couple of my mom's students from BYU were in it. The most impressive thing of all, though, was when Marlene Arnold, who must be in her seventies and has been doing the show for at least six years, did the splits. I kid you not. She was dancing and singing and at the end of the song she sank right into the splits and then got right back up again. It was, like...whoa.
It was fun to go the the playhouse again and see some of the same people we've seen acting in plays for years—Ken Norris, I think, has been in just about everything. My uncle did plays at the Valley Center Playhouse for years before my family even moved here, so although the playhouse isn't exactly a tradition for our family it does have a special place in our hearts. We've been going to plays there (occasionally) since the nineties.
I remember it being a very family friendly place. I think we took Josie to watch that hillbilly show - Possum City USA - Uncle Bruce was in way back in the day and she certainly wasn't five then. Just sayin'...
Oh, and I forgot to mention that Rachel did end up winning a chocolate bar for her costume. My costume went completely unrewarded but a girl with a white sweatshirt (on which she had placed some black blobs, calling herself a cow) won free tickets to a show. Everyone who dressed up got free tickets, except for Rachel, who chose the chocolate bar, and me. Not that I'm bitter. And not that I could even go to a show if I won tickets because I wouldn't be allowed to take my kids.
That's alright. We're going to a couple of other shows this weekend—Auntie Emily's concert on Friday night and a musical fireside on Sunday night at the Hale with Naanii—that actually are 100% family friendly.
Posted by Nancy at 2:16 AM