Tuesday was a bad day—by the time I was getting ready to go to my niece's play it had been decided that Rachel and Miriam would be staying home and going to bed. Miriam was pretty okay with that idea. Rachel was not. She screamed from the minute I walked out of the house until she fell asleep two hours later. And, actually, she screamed before I walked out of the house, too. That's why it was decided that I would be going without the children. I needed a break.

Sometimes it's weird for me to think that I have a niece in junior high—but she is and she's in drama and went to the Shakespeare Festival this past weekend in Cedar City. So did Josie. Josie got to watch Rosie perform there but she was the only one in the family who got to. I went to Josie's one-act play (Julius Caesar) last week with my parents. It was so funny, which is odd because it's a tragedy, right?

Well, in act II, scene I after all the conspirators have finished planning their repulsive crime, Brutus says, "Peace, count the clock." Cassius answers, "The clock hath stricken three." And then Trebonius declares, "'Tis time to part."

My mom burst out laughing.

That got me giggling, too. We didn't use that word in my house growing up and we certainly don't use it in my house now so I think it might have been hearing my mom say it aloud more than anything else that made me start to laugh. And then we both realized how ridiculous we looked and sounded, bouncing and laughing in our seats, while everyone else around us was caught up in a thick murder plot.

Anyway, Rosie's play was The Merchant of Venice. She was the Gold Casket Bearer, a made-up part, but nicely played. Her lines were the inscription that the princes would have read but instead of the prince reading them she said them. 'Who chooseth me shall gain what many men desire.' I thought it was a subtle way to "write-in" more parts. And her costume was gorgeous—she's third from the left on the top row (in both pictures).

"Portia's" dress was also beautiful—she's the second from the left (in both pictures). 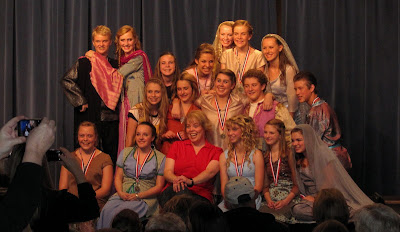 I don't know how Rosie's junior high found such amazing costumes. Josie's high school's costumes were second-rate...maybe even third-rate. But I suppose it isn't necessarily the costumes that makes the play. Both girls did great!

Josie, the busy girl, also had a choir concert yesterday (she just got back from the Shakespeare Festival on Sunday). This time I took both the girls with me. They were remarkably well-behaved and the concert was pretty good, too. My favourite number was All My Trials. It was beautifully done and the choir achieved such rich, swelling tones. I was impressed. 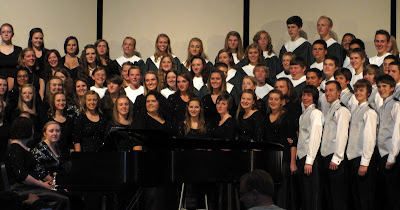 This year Josie is the chamber choir and the show choir. She's about in the middle of the piano on the front row in both of the pictures. 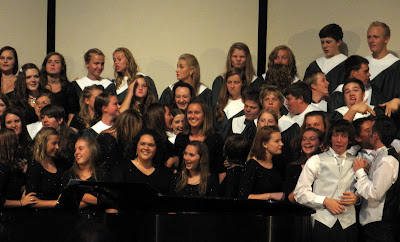 She came home with us—my parents and my girls and me—so we got a few pictures of her with the girls. I think they were actually a little surprised to see her there because, although we told them it was Auntie Josie's concert and I tried repeatedly to point her out to them, I don't think they believed that she was actually in it. 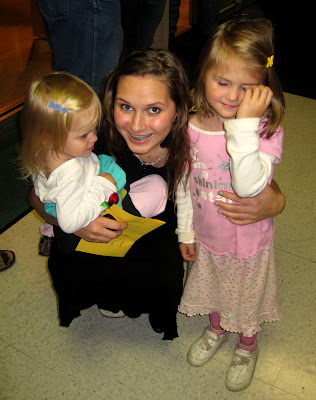 Miriam went off with Auntie Josie for a bit to meet some friends and help Auntie Josie get ready to go. Auntie Josie was shocked that Miriam let her a) hold her and b) move in a direction away from me while doing so. 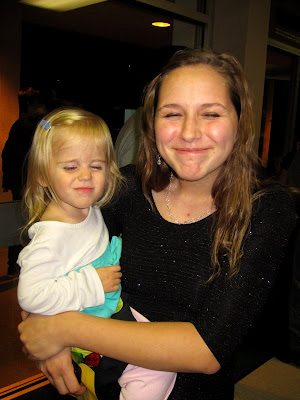 I have to admit, I was kind of surprised about it, myself. Miriam is a regular mama's girl. Perhaps it was because Auntie Josie's outfit was so sparkly... 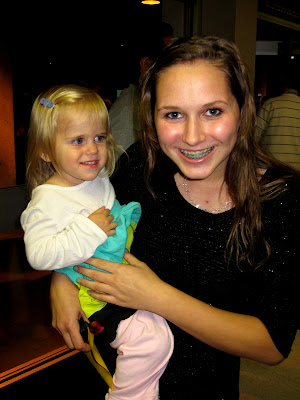 Today Andrew said, "We don't have any concerts or plays or anything to go to tonight, do we?"

Nope. I think we're done...until the Christmas rush!
Posted by Nancy at 1:24 AM