Today was a beautiful day brimming with imagination.
First, the girls disappeared into their bedroom to ready themselves for the ball. Even though they closed the door I wasn't too worried because they had just had me do their hair (also in preparation for the ball) and they walked into their room with armfuls of costumes. There was no fighting and they were taking a long time, but I didn't want to interrupt them when all I was hearing was happy noises...and I had just heard them dump out the blocks so maybe they got sidetracked on the way to the ball.
Then they emerged from their room fully powdered.
Hidden within their armfuls of scarves and sequins was a bottle of baby powder.
All princesses use powder when they get ready for balls. Didn't you know that?
The girls had baby powder in their hair, all over their faces, all over their dresses, all over their toes, and all over their carpet. Fortunately it was baby powder and not garlic powder. Everything smells absolutely lovely.
After dancing for a while, the girls decided they wanted to play Rapunzel. They immediately set to work creating frying pans. Rachel had drawn a frying pan on an empty cereal box—it actually looked somewhat like a frying pan. Miriam drew a frying pan on a piece of scrap paper—it looked nothing like a frying pan but we told her it was a beautiful frying pan, anyway. After asking me to cut out her frying pan, we traced it and cut it out again, and then Rachel began gluing and taping the two pieces of cardboard together—to make it less bendy.
Heaven forbid we have a bendy fake cardboard weapon in our home.
"I need you to rip just one more piece of tape for me so that I can put it across here to make it more frying-panner," Rachel said. I did so, and then she did so and announced, "There. Now that's Rapunzely!"
Frying pans. Who knew?
Rachel asked me to help her tuck a yellow scarf into her ponytail holder. Miriam wore the princess hat with the long, flowing tail. And they both played Rapunzel.
Somehow this game morphed into a tiger game. Fortunately Rachel was the tiger and Miriam was the fake-frying pan-wielding hero. There was much screaming and running around and I was still trying to get the cookies finished so I asked them to stop with the violent game and start playing something a little gentler.
"Okay," Rachel said, "Then I'm a magical fire-breathing tiger that breathes fire. But the fire doesn't hurt any of the aminals [sic] in the forest. It just keeps them warm. I'm a nice, magical, fire-breathing tiger. And Miriam is my baby tiger so she can't be scared of me because babies aren't afraid of their mothers even if their mother is a tiger."
That was a much quieter game, though with all the fire-breathing that was going on I was glad we were in the house instead of the car or we'd have been all fogged up!
Rachel drew a picture of her tiger. I was quite impressed. Even though the tiger looks like it might have had a centipede for a mother—we asked Rachel how many legs a tiger actually has and she couldn't answer. This tiger has seventeen legs. But it is a nice, magical, fire-breathing tiger so perhaps isn't held to the same, boring four-leg standard that regular tigers are bound to. 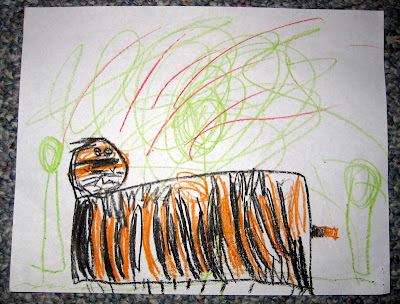