We try to leave for school at 8:50 AM. On Thursday at 8:51 AM I was hurrying to do Rachel's hair so we could dash out the door when she requested "Princess Leia hair." Let's just say that conversation ended up in tears and regular, ordinary half-ponytail.
This morning we didn't get up until 8:00 AM (or at least Andrew and I didn't get up; I know the girls were up and playing in their room long before that) but since General Conference doesn't start until 10:00 AM we had plenty of time to get ready for the day. Rachel requested Princess Leia hair again and this time I obliged her. I put her tails in loopy pigtails right by her ears, which satisfied her. 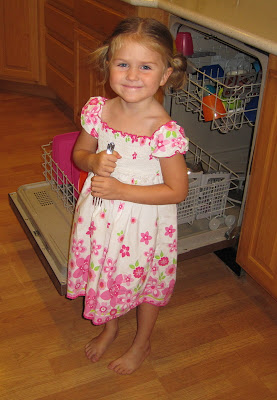 She's decided she no longer wants to be a witch for Halloween. Now she wants to be Princess Leia—Daddy watched the girls while I went to the Relief Society broadcast last Saturday and they had pizza and popcorn and watched Star Wars and now the girls can't wait for me to leave them alone with Daddy again.
When Miriam saw Rachel's hair and Rachel told her that it was Princess Leia hair, Miriam requested that I do the same thing for her. 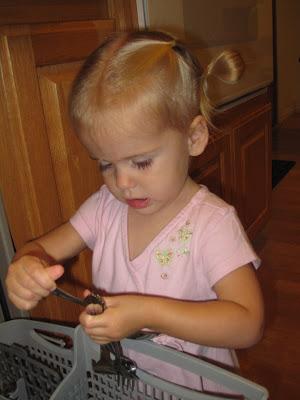 And then the girls went off and put the dishes away with Daddy. Happily. Because Princess Leia would never behave otherwise.
When Andrew got his breakfast he put the jug of cold milk on Rachel's bare neck. Then he apparently forgot about that, poured some cereal, poured some milk and, fortunately, put the lid back on the jug. Then next thing I know there's a bunch of screaming and banging and stomping and then Rachel ran into where I was (which was not in the kitchen) for protection, violently lugging the jug of milk with her.
"What is going on here?!" I demanded to know.
She was trying to get Daddy back but was a little too intimidated to actually follow through with her plan. He was chasing her. Fortunately the lid didn't pop off the milk jug or we'd have milk all over our house!
After breakfast Daddy took the girls down to watch the last half of Music and the Spoken Word. I worked on the Hancock Hummer, our family newsletter, but I did sneak downstairs to check on the kids. They were snuggled right up to their Daddy. 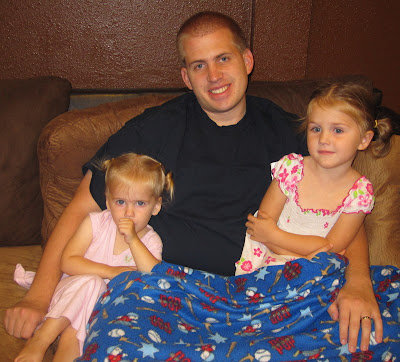 They were too cute! 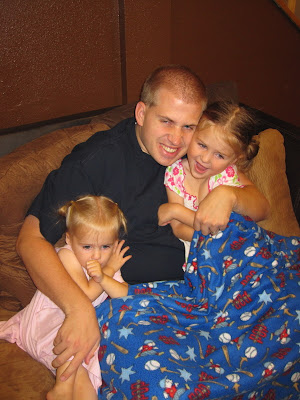 Conference was good, of course. The girls spent the whole opening hymn colouring...and that's about how long that activity lasted if that gives you any idea of how many activities I had to come up with to keep these girls occupied! 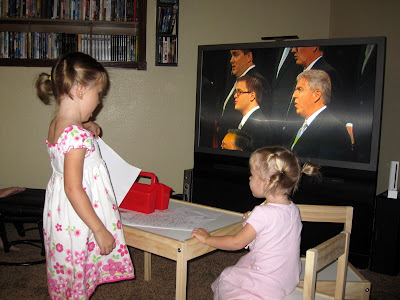 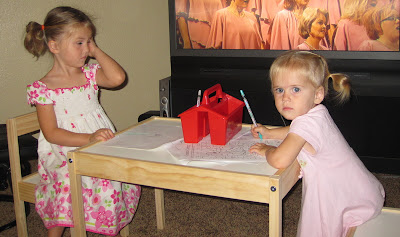 It helped (or didn't) that we had a bunch of BYU kids over to watch conference with us. The girls were showing off for them which helped to both entertain the girls while at the same time distracting them from the activities I was trying to get them interested in. 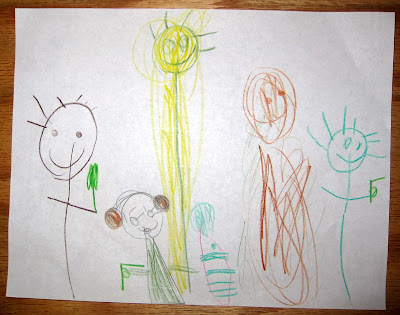 From left to right you have Luke Skywalker, Princess Leia, C3P0, R2D2, Chewbacca, and Han Solo.

Today I learned than Han Solo's name is Han, not Hans. My whole life I thought he was German.

Miriam drew Rapunzel over and over and over again. That's pretty much all she ever draws. Ironically I cannot find a paper with Rapunzel on it, which is odd because nearly every scrap of paper in our house has Rapunzel scribbles on it. Next time.

For lunch we had waffles with buttermilk syrup and approximately 30 BYU kids! It was a little crazy over here! My mom came with Patrick, as well, and Rachel's new friend Emily and her family came over, too—Emily's parents just moved in with their parents who live down the street and we couldn't be happier about that because they have double the population of children living on our street. We now have four kids, ages 1, 2, 3, and 4. Emily's come over to play for the last two days and she's lived here for two days so that's a pretty good track record, I think.

The second session of conference was pretty uneventful. Miriam took a nap—for the whole session—and Rachel, Andrew, and I built this marble run together. Ignore Rachel whining about not being allowed to take the picture and focus on our awesome construction skills. 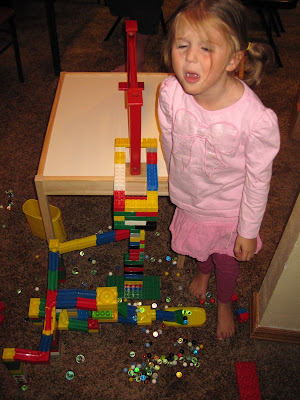 We used an Archimedes-style marble run that Karen's father made (it's resting on the table) and then had the marble drop off into a funnel we built and ran it down the marble track we made. It was awesome—a little distracting, but awesome. I figure we wouldn't have been able to pay more attention if we hadn't been building with Rachel, anyway, because she'd be distracting us in some other way.

I'm so glad they put conference up online so soon after it's broadcasted because then I can read the talks at my leisure! For some reason shoving ten hours of conference into one weekend doesn't yield high absorption rates for young families.
Posted by Nancy at 1:43 AM