Yesterday we had a family gathering at my mom's house since our family didn't really get together for Thanksgiving. Rosie was the photographer for that event, so I don't have any pictures yet. It was really quite fun. My sister Kelli was there with three of her kids: Rosie, Matthew, and Andrew. I was there with my girls: Rachel and Miriam. Uncle Patrick was there, as well as my mom and dad. We Skyped with Abra, who had two of her kids over: Piper and Malachi. Andrew (my Andrew) came for dinner but then left after dinner so that he could do homework (what else?).
I think that is the first time we've had that many of the cousins "together" before. It was fun to get to chat with and watch Piper and Malachi get to know their Utah cousins a bit better. I haven't had my two oldest sisters in the "same room" in, oh, about a decade.
For Christmas I think it would be really fun to get both Abra (in Canada) and David (in England) on a Skype conference call when we're all at my parents' house. (Josie, by the way, was in New Mexico visiting a friend for Thanksgiving which is why she wasn't home but she arrived back in Provo at around 8:00 and my mom and I went to pick her up so I got to see all of my siblings except for David; that's pretty cool).
Anyway, Abra and her kids were eating dinner when we called. Usually Abra doesn't have her kids on Sunday evenings but there was a freak windstorm, with speeds reaching as high as 150 km/hr (which is high enough to be classified as a class 1 hurricane) and shingles were being ripped off roofs, windows were being blown out, and trees were downing power lines left and right, school was cancelled for Monday so her kids were able to stay over an extra night. Anyway...they were eating perogies for dinner, which got me thinking that we haven't had perogies in a long time.
Perogies are a very popular dish in Canada, though they hail from Eastern Europe. They aren't quite as popular in the United States, at least not in this part of the United States. That means you can't buy them in the grocery store and instead you have to make them from scratch. They're better that way but it's a whole lot of work, especially if you, like me, don't have a perogy maker and instead shape them by hand.
Every once in a while all that work is so totally worth it. 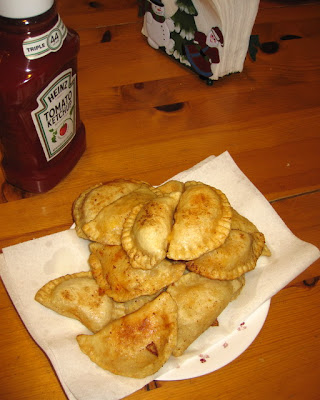 We had quite a bit of leftover mashed potatoes from Thanksgiving dinner, which meant that I didn't have to do much for the filling—I just added cheese and bacon to the potatoes. Then I made the dough, and rolled, cut, filled, and boiled perogy after perogy. We had three platefuls by the time we were finished (I made Andrew fry them since I had done everything else).
They were a huge hit! 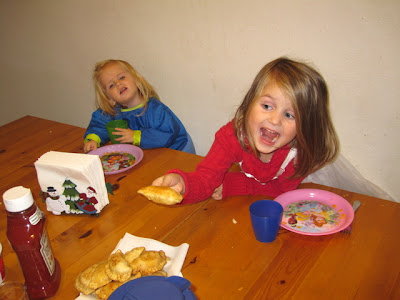 Reid even said, "I love Canadians. I love anybody who eats food like this!" 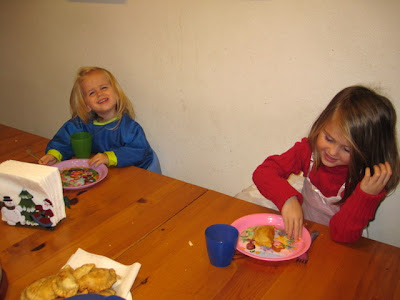 Andrew is taking (some) of the leftovers for his lunch tomorrow (but only some because if he takes them all it's possible there will be an uprising while he's gone—we've got to appease the masses). By the way, I just thought I'd point out that ketchup is not a regular topping for perogies—Andrew and I ate ours with sour cream—but our girls wanted ketchup and Grandpa wanted BBQ sauce. Anything goes, I guess.

After dinner we had FHE. Rachel asked if we could do an "activity" for the lesson. I told her that was a good idea and then asked her what kind of activity we should do.

"Oh, you mean the nativity?" I asked.

We didn't act out the nativity this week, but we did talk about the Christmas story a little bit, which is probably a good thing because the girls are still a little fuzzy on the details.

"So Mary and Joseph went to Bethlehem to be taxed," I said.

"I went to Bethlehem!" Miriam yelled. "And I saw Mary way up close!"

It's true. We went to "A Night in Bethlehem" the other day (not actually in Bethlehem but in Pleasant Grove) and she saw Mary way up close. I continued with the story until I got to the part about the wise men and the gifts of frankincense, gold, and myrrh.

"Thank you, Relevant Girl," I said. "Any other questions?"

"Any other on topic questions?" I clarified.

"That was on topic," Andrew pointed out. "I think she wants to know what frankincense looks like."
Posted by Nancy at 11:28 PM