Christmas is coming...and so are the missionary kangaroos

On Thanksgiving Eve, Rachel asked whether Santa comes on Thanksgiving or Christmas because she couldn't quite remember. I told her that Santa comes on Christmas.
She sighed and said, "And you're sure tomorrow's only Thanksgiving?"
We've been talking about Christmas decorations for weeks now—I think Grandma decided to put up a little bit of her train this year—and the girls are getting excited for Christmas. Miriam doesn't quite understand what presents are and when you ask her what she wants for Christmas she'll tell you she wants pink. She was going around yesterday telling everyone what colour they were going to get for Christmas. She was mad at Grandpa so he was assigned brown. Rachel, on the other hand, was in a favourable light at the time and Miriam said she'd get "pink—same a' me!"
Uncle Patrick told them what he actually wanted for Christmas—wool socks, a poncho, and a rolling pin (I didn't understand the rolling pin at first but today he explained that he wanted it for physical therapy not for making pie crusts). Rachel looked up at him and said quite thoughtfully, "Well, we're going to a place where there's lots of Santa's workers and things—and maybe even Santa will be there—and Grandma said that you can tell them what you want for Christmas. So maybe...if you come with us...then you can tell them what you want Santa to bring to you."
He declined. But it was quite thoughtful of her. The Shops at the Riverwoods does some neat stuff at Christmastime—they have Santa's village (with Santa visits) and carriage rides and pretty lights. It's fun. We'll go...sometime.
Anyway, today we set up the Christmas tree. Rachel and Grandma did most of it, I think. 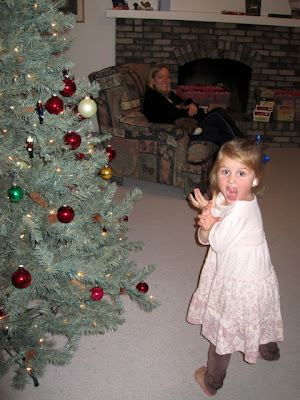 Rachel was having a great time. I think it's possible she had too much pie (read: too much sugar) this weekend. 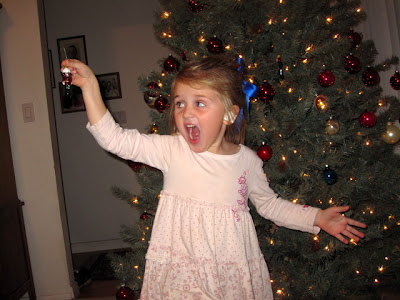 She did have a few calm moments, though—whenever anyone would remind her that the ornaments were made of glass. 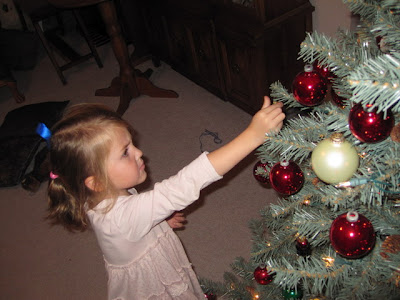 Miriam didn't help because she was napping. Poor thing. There's lots more to do to help decorate for Christmas though—Grandma still has to decorate her travel tree so perhaps Miriam can help with that tree.
In the early evening we had some visitors from Peru. They know Jacob and they came bearing gifts and speaking Spanish. It was a fun evening—though the girls were expecting missionary kangaroos and were a little disappointed when plain ordinary people showed up on our front porch (even though we told them multiple times that we say that some people from Uncle Jacob's mission in Peru were coming). Right now Jacob is in El Trebol and he lives on the fourth floor of an apartment building owned by a family he attends church with. Their son and daughter are starting school in Salt Lake this coming semester so they're here with their mom getting settled.
They brought up a poncho, a hat, and a vase of sorts—from Jacob. 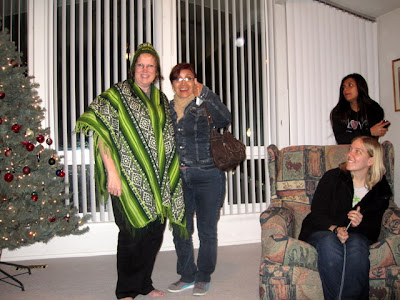 Rachel had to try it on, too. 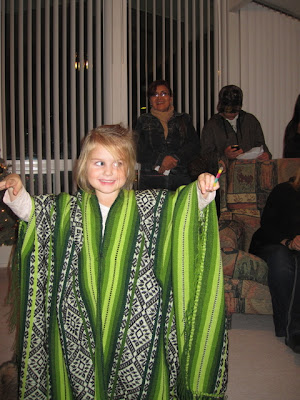 We had a nice visit in Spanglish. They all just love Jacob to smithereens. They say his energy is contagious, that he laughs all the time, and that he loves the gospel and works really hard. 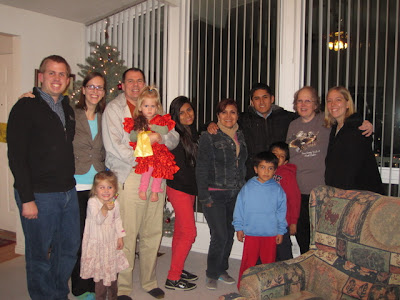