An Evening of Percussion, matinee-style

Today we went to BYU's Evening of Percussion, only we went to the matinee show instead of the evening show so I suppose it was technically a Late Morning of Percussion for us. My mom had originally bought tickets for our little family of four and for my dad and Josie, but then Josie bailed out to go to a sleepover and my dad got sick and Andrew decided he was too busy to go. That left us with three extra tickets, so after calling around for a bit I finally convinced my friend Tracy to come along with two of her boys.

It ended up being a wonderful concert and just perfect for children. The various percussion groups showcased music from around the world. We first listened to a Vietnamese percussion group called the Go Group. They actually did a "table piece" by a French composer, which is played on...a table.

"This is incredible!" Rachel whispered to me. "They don't even have an instrument but they're still making music!"

And that's exactly what the percussion professor told us—that if you can strike it or scrape it or shake it then they can play it. That's percussion!

Next up we a xylophone piece with marimbas, a glockenspiel, and vibraphones that was originally written for piano. Something about a...doll. I can't remember the title and they didn't hand out programs. It was good, though.

Then they moved all the xylophones off stage to make room for Bintang Wahyu, the Gamelan group my mom is in at BYU. Dr. Grimshaw taught the audience what their Balinese names would be—there's a simple formula for figuring it out.

And so forth. Balik means again.

Then you just tack on your family name.

So my name is Ni Ketut Layton. Rachel's name is Ni Wayan Heiss. Miriam's is Ni Made Heiss. Andrew's is I Wayan Heiss. As Dr. Grimshaw pointed out, this can be very confusing, because if you're in a crowd in Bali and you call out, "Hey, Nyoman!" then a quarter of the crowd turns around. Fortunately, Bali is relatively small. And they do use other names, too, because my mom has a friend named Dek, who is from Tabanan, Bali. That said, her other friends from Bali go by Ketut and Made, though Ketut might actually go by Marni, which is her surname. Anyway, they really do still use this formula to name their children.

Rachel was excited when Bintang Wahyu came on stage—she was hoping there'd be dancers again. She even remembered that last time there was a boy and monkey dancing on stage. This time, though, there were no dancers (except for the children in our row who got down to dance—I won't mention any names but some of them could hardly stay in their seats for bouncing around to the music so enthusiastically).

Dr. Grimshaw also had a quiz for the kids where he had them guess which music pattern went with which name. The technical terms for Gamelan are onomatopoeic so the term gong, for example, applies to the sound a gong makes (big surprise there). Then there was ceng-ceng (chang-chang), which applied to the cymbals. Pit-pat-a-pit, or something, to the drums, and bryang to the xylophone-esque instruments.

It was interesting to learn all of that. And to listen to the music, of course.

The last group was a steel drum grop. I learned a lot about steel drums, too. For one thing, they're called pans. I didn't know that. We watched a short clip on how they're made—out of oil barrels, originally—and learned that the lead pans can have 30+ notes on them, some as small as a quarter, while the bass pans typically have about 3, sometimes as large as a watermelon. They just make indentations in the metal a certain size for a certain note. They look terribly complicated to play but make such a beautiful sound! And the history of their origin is both fascinating and infuriating—when Trinidad was being colonized, the colonizers banned all types of drums and yet the people kept coming up with all sorts of things to drum on—including frying pans and oil drums. And thus, steel pans were born.

After the concert there was a bit of a mad rush to the stage and the kids started playing on all the instruments. It didn't seem to bother Dr. Grimshaw at all—he usually invites people up afterwards to experiment on his instruments—but it did seem to irk the other percussion professor a little bit. He was a good sport and let the kids bang around a bit anyway—I mean, they're steel drums, right...not delicate violins...what damage are the kids going to do—before asking that we call it quits so the ensemble members could quit supervising and go to lunch.

My kids and Tracy's kids had fun with my mom. She helped them play on the Gamelan instruments. 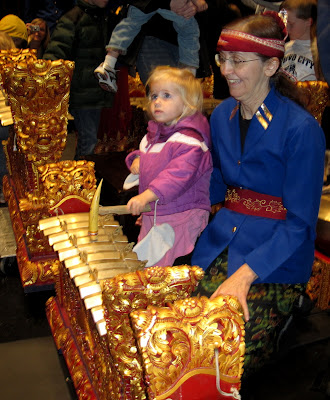 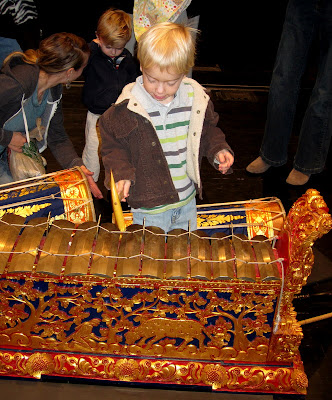 How cute would it be to teach these kids a song or two and have them perform. They all look so serious in this picture... 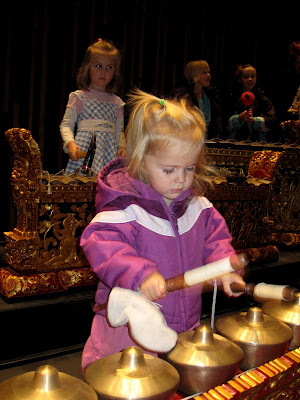 As cute as that would be, it would also be rather chaotic... 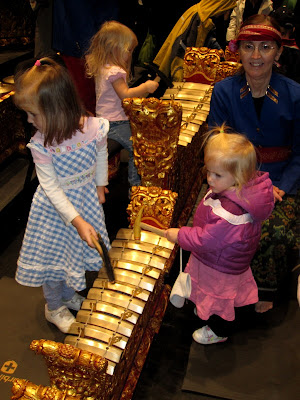 The kids certainly had a lot of fun, though. I was happy just to have BYU let the percussion groups hold a kid-friendly concert but I think letting the kids get up on stage to experience music is a very important thing, too. 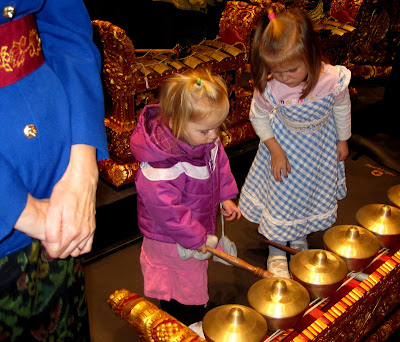 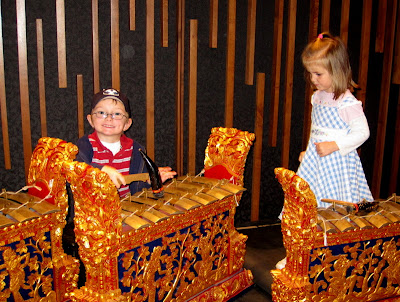 It helps get the kids excited about music, which is important if we want to encourage musicality in the future, which I assume we do. 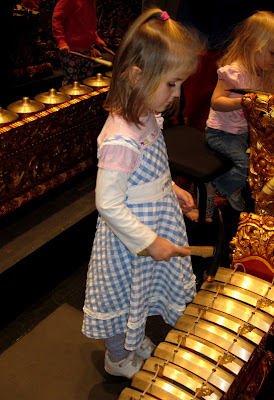 Anyway, it was an enjoyable outing—here's one last picture of my girls with their Naanii right before we left to go home. 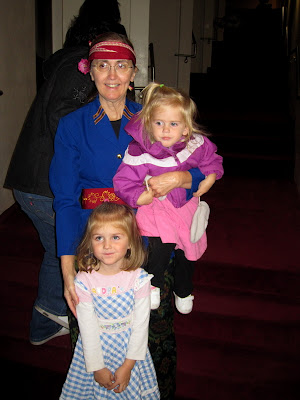