This week we turned the girls' jack-o-lanterns into several beautiful pumpkin pies—I made three pies today and ended up freezing the rest of the pie filling to use later (it should make two more pies). 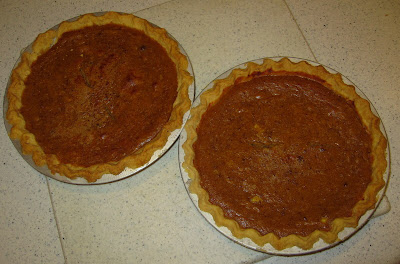 I thought Rachel would be opposed to the idea of cutting up, baking, and pureeing her jack-o-lantern but she surprised me.
"Are we going to make a pie?" she squealed.
"Actually, yes," I said.
"Then, yes!" she said, shoving her smiling pumpkin into my arms. "You can have it!"
Miriam, on the other hand, was a little more attached to her jack-o-lantern than I guessed she would be. She had been pushing it around in the doll stroller the entirety of the morning the day after Halloween, but we'd only just carved them on Halloween afternoon—and she was so sick she didn't seem to even care. There was no way she was going to give up her pumpkin willingly, though, so I waited for her to go down for a nap before I pumpkin-napped it straight out of the doll carriage and popped it in the oven to bake.
That makes me sound only a little like a wicked, old witch, right?
When I baked the first pumpkin I forgot to put any water in the pan with it. It got a little golden brown around the edges but the upside was that there was no extra moisture in my pumpkin goo (like what you'd get if you were to steam the pumpkin, I suppose) after I pureed it. That worked out nicely. That was on Tuesday—and then all that pumpkin goo sat and sat and sat and sat in the fridge until today when I finally decided I was brave enough to tak on the entire process of making a pie.
It turned out to be not quite as complicated as I thought. I just followed the pie crust recipe here and the pie filling recipe here and put it in the oven, set the timer, and sat down to read while Miriam napped and Rachel had quiet time. I love Sundays—it's the only day I seem to be able to enforce quiet time.
Miriam woke up when the pies were still in the oven and then she and Rachel played "cooking show" and made pumpkin pies. They were both so excited to try the pie and could hardly wait until after dinner! Fortunately, Grandma Sharon and Grandpa Frank stopped by for a quick visit and were able to divert the girls' attention away from the pies otherwise they'd probably have finger holes stuck all over them. 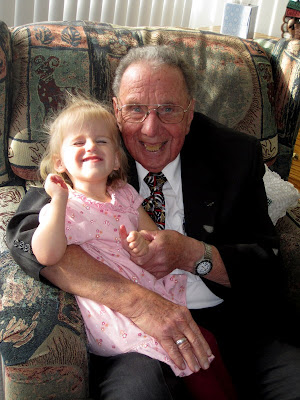 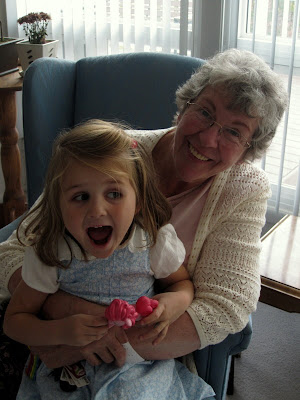 They had gotten the wrong size of clothes for Miriam's birthday so today they brought over the correct size. Miriam was so excited for her new outfit that she tried to take off her dress—luckily it buttons up the back so she was stuck. Rachel said her talk for Grandma and Grandpa, which was good practice for her. She also practiced at church and was able to quell her nerves much better than last week and only started getting worked up about five minutes before it was her turn. Next Sunday is the big day—hopefully she'll be confident enough about her lines by then.
We took one of the pies over to my parents' house after Grandma and Grandpa left so that we could share it with them—they had invited us over for dinner. After dinner we had planned to go to Diwali at Krishna's Lotus Temple in Spanish Fork. Sadly, when we got there, there was hardly anyone there. 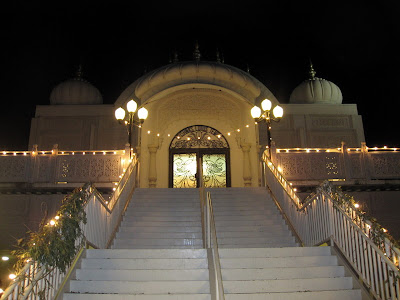 We thought that was rather odd because the last time we had gone the festival seemed to go on for hours and hours—here it was, barely seven o'clock, and the place was practically deserted. We went upstairs, anyway, but that was empty, too. We poked around a bit and I tried to answer the girls' questions the best I could but we soon decided there was certainly no festival tonight and went back downstairs.
There were a few people enjoying a meal together.
"Did you come for the festival?" they asked.
We told them we had.
"Oh, we thought that would happen—we've had several people drop by tonight. The festival was last night here and tonight it's at the Salt Lake Temple."
Bummer deal.
But they did invite us back for any following Sunday at 5:00 when they do music and so forth. So maybe we'll plan on doing that later...or maybe I'll even convince my mom to do a yoga class with me!
We enjoyed wandering around the temple, anyway. 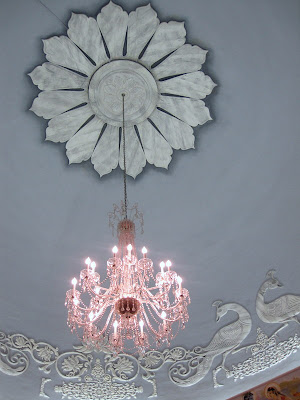 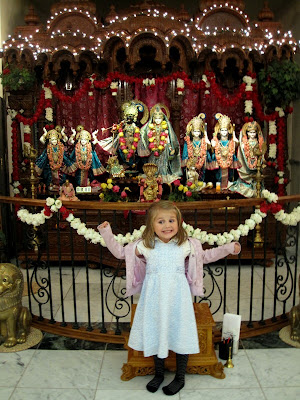 I think it's very important for my girls (and me) to see how other people live and worship. Several of my growing-up years were spent in British Columbia in the Vancouver region—my next-door neighbours (my best friends!) were Hindu, I had several friends who were Buddhist, a boy in my class was a Jehovah's Witness, and I'm sure there were Jews and Catholics and Protestants mixed in there with me—the solitary Mormon. No one ever really made fun of me for being a Mormon when I lived there. I don't actually recall anyone being teased about their religion. That may have been because I was too young to notice but it also might be because everyone was so different that we realized that as long as we were all good people we could all get along.

Back during Ramadan, my friend TareX posted on Facebook about how different Ramadan felt in different places he has lived. When he lived in Canada with his family, surrounded by a few good Muslim friends, he loved Ramadan—fasting together brought them closer together but they were able to do it privately still, without changing their outward appearance, so to speak, or altering their daily schedule. He felt they all grew closer together and closer to God. Then he moved away from home to go to grad school and celebrated Ramadan alone. He said that was difficult—there was no group faith. Now he lives in the Middle East and just celebrated Ramadan at the end of the summer. He said that was difficult—everyone is fasting together, it's true, but he doesn't feel the same level of devotion and faith that he felt when he was fasting in a small group with his family and friends in Canada. In the Middle East they change business hours and "show off" their fasting (and later feasting) in ways that could be seen as insincere.*

He said he preferred Ramadan in a small close-knit group to being alone for Ramadan or being in a place where Ramadan is cultural in addition to being religious.

I completely understand that feeling. Living in Utah is fine, but it is hard for me to be in a place where my religion is also the culture. I crave diversity. And it is here but you kind of have to seek it out. 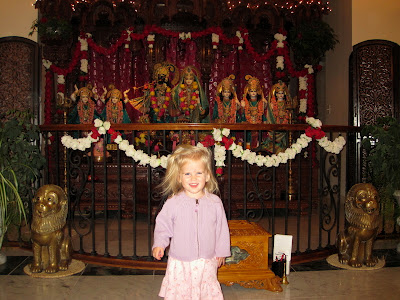 Getting to wander around a Hindu Temple was the perfect getaway for me. It's beautifully decorated and was peaceful and...different. 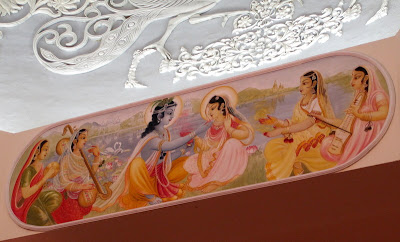 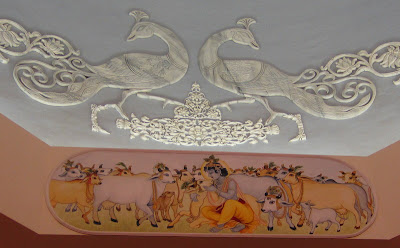 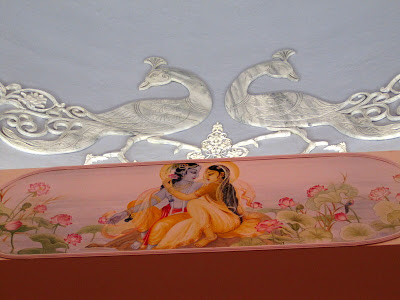 They have depictions of deity all over the place and while I don't know much about Hindu gods I did try to explain to Rachel, my little questioner, about them.
"What is this?" she'd ask.
"I think that's a statue of a god," I'd say.
"Is it a real god?"
"Well, that is just a statue, like the statue of Jesus at Temple Square. But Heavenly Father loves all his children and has sent many angels and messengers to people all over the world. Hindus are good people and so they must be getting that goodness from God."
How do you explain these things to a four-year-old? While we may not believe in a god of that form, who am I to deny anyone the right to do so? My belief is that, when it comes right down to it, we're all worshiping the same God. Fortunately, four-year-olds (though incredibly inquisitive) are easily placated and she didn't press the issue.
Then she found this effigy of...someone. I'm not sure who but it is rather realistic and totally scared Rachel and Miriam, but only for a moment before they got hopelessly curious. 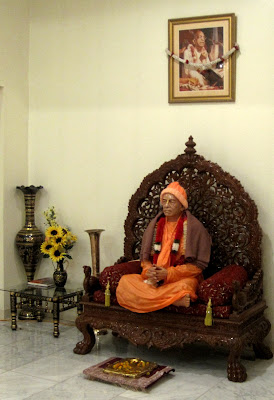 All I could tell them was that he was likely rather important because at his feet was a set of golden footprints filled with offerings of marigolds and a single coin. 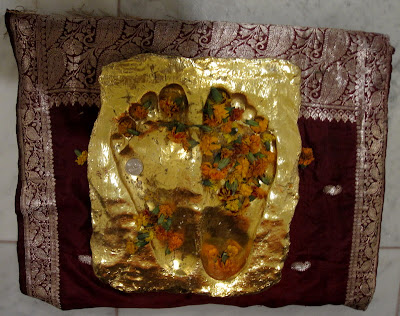 Yup. We definitely need to go back for an informational tour sometime. Perhaps it was Srila Prabhupada? That would make sense. 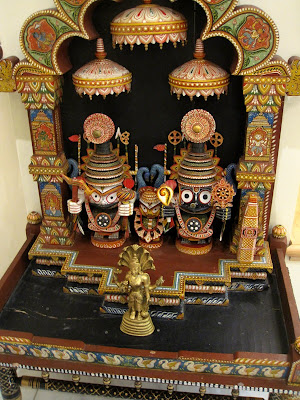 Anyway, it was a fun evening if not near as exciting as we hoped it would be.
All I can think about right now is pie, though, so perhaps it's time for a second piece...
Posted by Nancy at 12:18 AM