The picture that wasn't

Grandma got the girls these cute ladybug outfits and I convinced them both to wear them today. Rachel didn't take any convincing. Miriam cried because her shirt "not look like a dress!" you know, because it's a shirt. She got over that though when I had her show off her outfit to a few people and they told her how cute she was.
Having accomplished this goal of getting the girls in matching outfits, which is something I rarely can do—and I mean that in every sense of the word, as in having their outfits match each other or having their outfits match at all—I was next determined to take a picture of my girls together. That didn't happen.
They were off playing with some of the BYU students for most of the afternoon and I was more than happy to allow them to do so. Rachel came upstairs at one point and said, "Mom, the big kids [that's what she calls college kids] would like to know if they can watch a movie."
The football game was playing downstairs but the kids had been talking about watching A Charlie Brown Thanksgiving (which I didn't know existed until today, but it makes sense since there's A Charlie Brown Christmas and It's the Great Pumpkin, Charlie Brown and I knew about those) because it's a tradition in some of their homes to watch it on Thanksgiving. Apparently it was on TV today.
I told Rachel that they could.
"Ummmm...can I...watch it...with them?" she asked.
"Sure," I told her.
Andrew went downstairs to help them set up the movie since it's a little complicated (at least I think so).
"What movie do you guys want to watch?" he asked.
"Movie?" one asked. "We have to leave soon. I told my parents I'd Skype with them at six!"
Yeah. Rachel orchestrated that whole situation like a master manipulator. Well played, Rachel. Well played.
So Rachel and Miriam watched The Wizard of Oz with Grandma and all the big kids went home. Miriam came upstairs half way through the movie and requested help dressing up as Dorothy before returning to finish the movie. When they were finished it was about time to get ready for bed.
Here's my chance! I thought. I'll just have them sit down and we'll take a picture and then put them to bed. Easy.
Not so.
Miriam refused to let us take the Dorothy dress off. Every time we'd try peeling it off over her head she'd squeeze her arms down to her side at the last minute. Eventually we had one of us manipulate her arms while the other manipulated the dress and with lots of effort and coordination we eventually got it off of her. And she was spitting mad about it.
And then Rachel went digging through the stuffed animals to find Toto and upon finding him, proceeded to parade in front of Miriam crooning about how she'd found Toto (even though I had warned her not to do this in the first place). We tried cheering Miriam up by presenting her with other stuffed dogs. Nothing would work. Rachel tried convincing Miriam to name her new stuffed bear Toto (that Grandma Sharon gave her for her birthday) but Miriam wasn't willing to work with that idea, either.
"Not want mine own Toto! Me wants yours Toto!"
It was about that point that I decided to scratch the idea of the two of them sitting all cute and smiley for a portrait and decided that the better idea was just to get them into bed—with all the screaming going on it wasn't a difficult choice to make. Not at all.
So while Andrew wrestled Miriam into her pyjamas, I called Rachel into the office to snap a picture of her in her new outfit. By this time she had forgotten about playing with the dog (though she had claimed it as her companion for the night by putting it on her bed well out of Miriam's reach) and had taken up her wand instead. 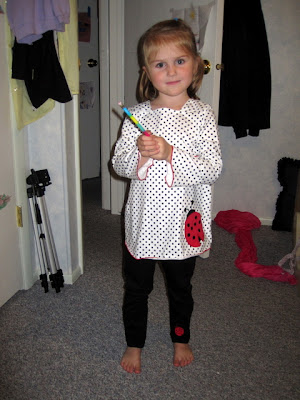 I will leave it to your imagination to create the image of my two little ladybug-clad girls standing side-by-side, smiling wide Thanksgiving smiles for a beautiful Thanksgiving portrait. 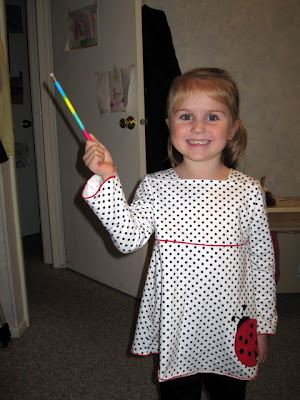 I hope your imagination is in good shape.
Posted by Nancy at 1:39 AM