Skating (and other stuff)

Today our calendar was blissfully blank—completely uncluttered by class schedules or homework deadlines or appointments of any kind. This hasn't happened in the longest time so when Andrew announced that he was going to head to campus to return a textbook, pick up something from the MPA lounge, and mail a package I completely hijacked his plan, asked him to check the schedule at the skating rink, rounded the girls up, piled into the van and announced we were coming with him and we were going to have some fun (dagnabbit)!

Rachel has been begging to go ice skating for months now but we've been waiting for the rink to accept our Pass of All Passes (which they do now...through May 26th). We weren't quite sure how the girls would take to it but figured they both just scream the whole time so even though we got there only an hour before "public skate" ended we figured an hour would be long enough. We still had to pay to rent skates—I brought my skates but we couldn't find her skates (which are Auntie Josie's old skates which were Uncle Patrick's old skates which were my old skates—though to be fair we only looked for about five minutes before we had to go).

We didn't tell the girls that where we were going only that it was a surprise—and that they had to wear pants and socks.

"A surprise?!" Rachel yelled, running to get her shoes. "I love those!"

She fretted about the what the surprise was the whole way to the rink. And she still had no idea what the surprise was when we got inside (because she's never been in an ice rink) so I helped her stand up on a bench so she could look into the rink—there was a real figure skater dancing around and Rachel just about died of excitement on the spot when she figured out that we'd be going skating as well.

I took a picture of Miriam before we started to skate (which was a very good idea because she really did spend most of the time crying). 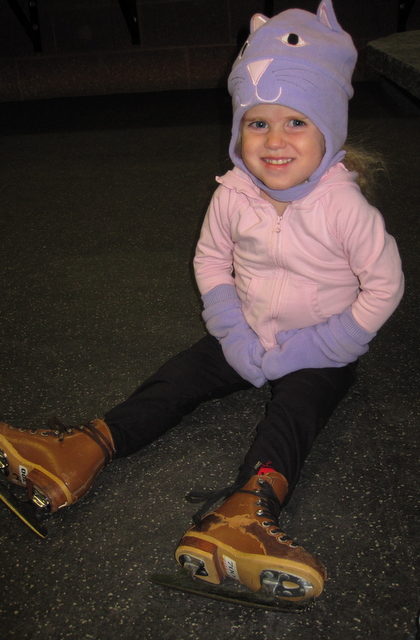 Rachel, on the other hand, was a skating sensation. 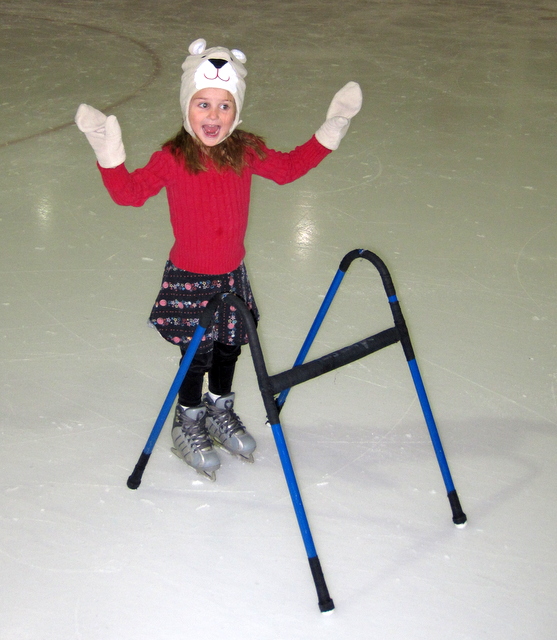 She was a little nervous when she first got onto the ice and she fell down a lot but soon she got the hang of it and was zooming around the rink, relatively speaking. Having the little "walkers" certainly helped and she was able to manage hers all on her own. 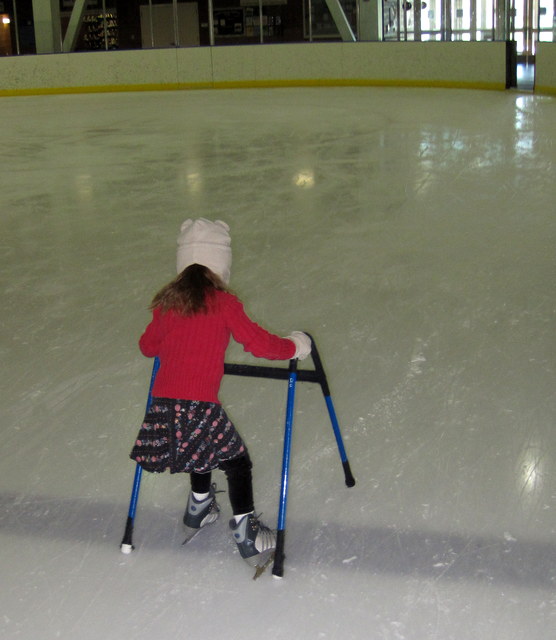 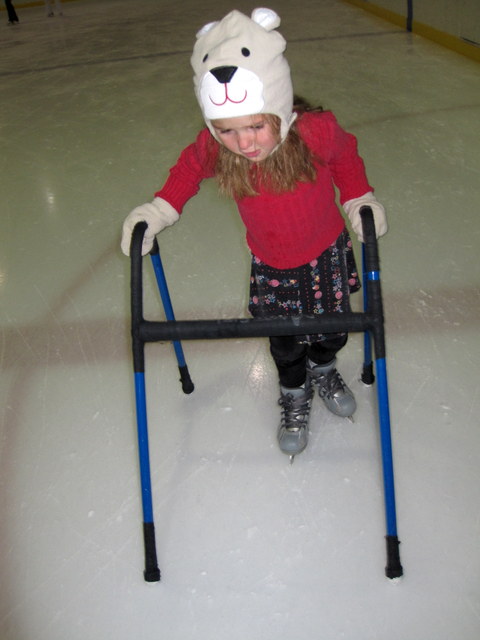 Miriam, on the other hand, needed a bit more help: 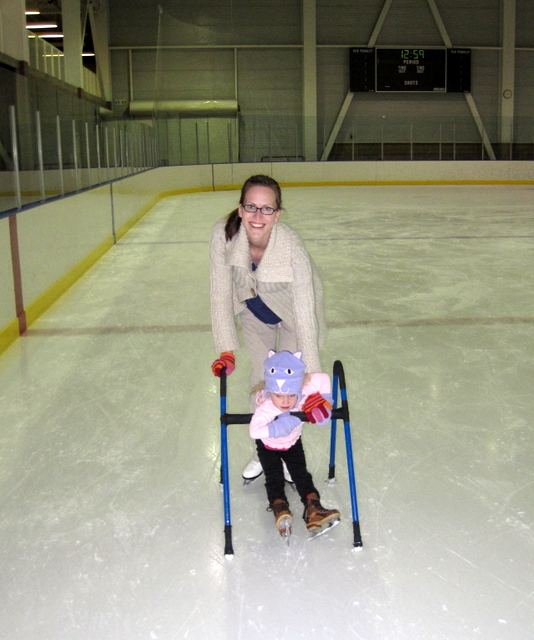 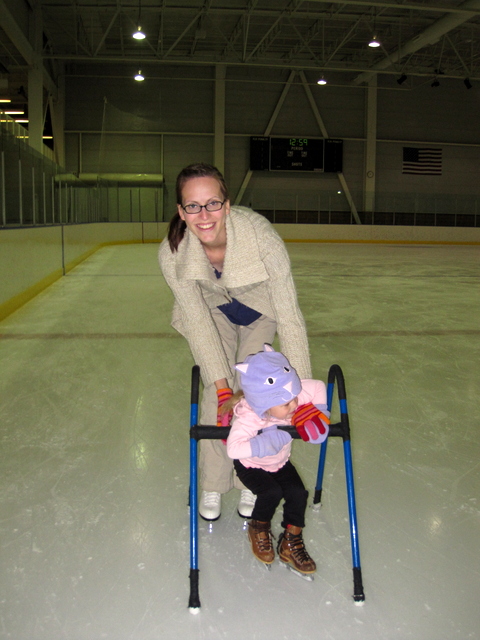 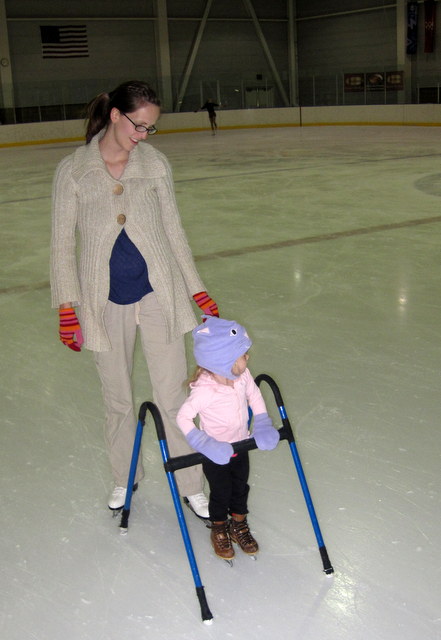 Andrew and I switched off between hauling Miriam around the rink and skating beside Rachel. 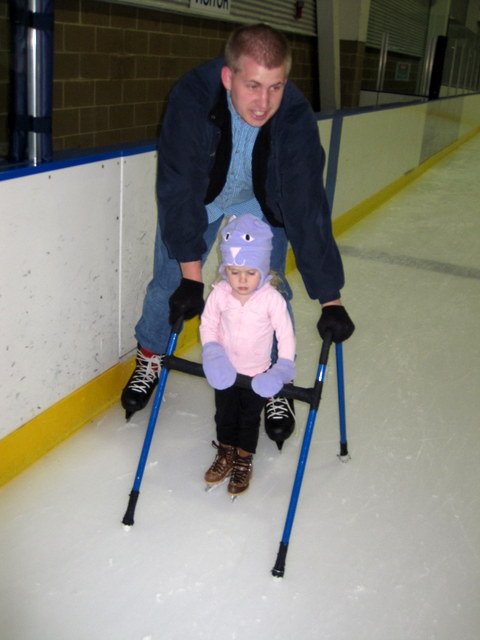 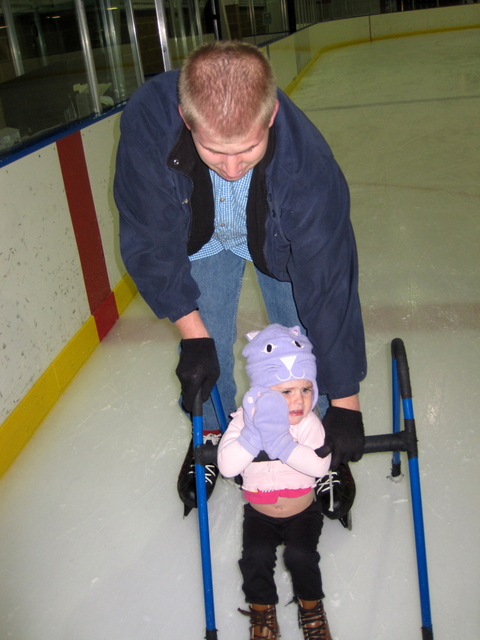 Toward the end Miriam was crying because she only wanted to skate with Mommy. Andrew convinced her to stay with him by saying that he'd take her to have a rest in the penalty box. Resting off the ice was her favourite part of skating, I think. 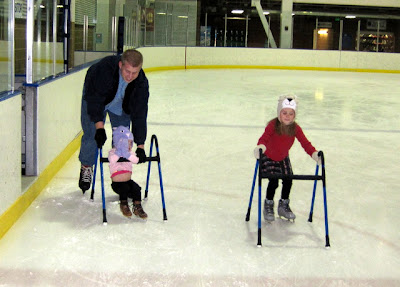 So Rachel and I skated around for a while. She kept wanting to race, which was rather hilarious because she gets so out of control when she starts going too fast. 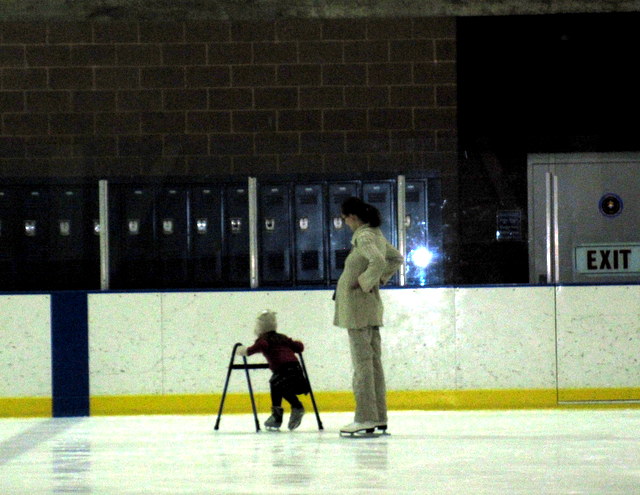 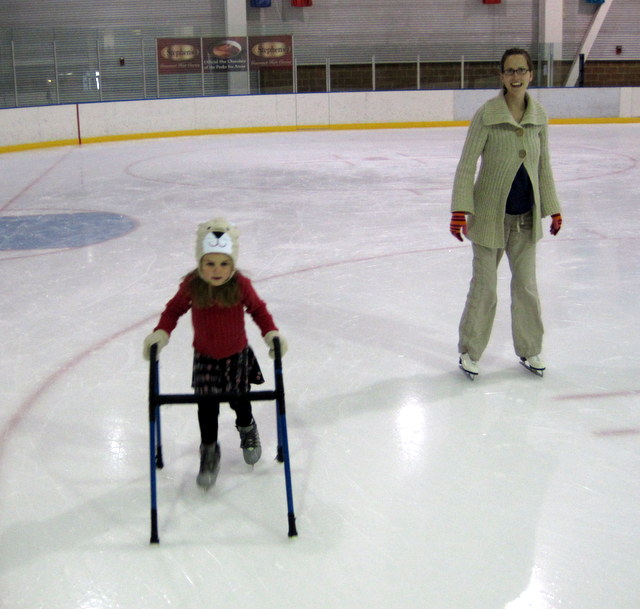 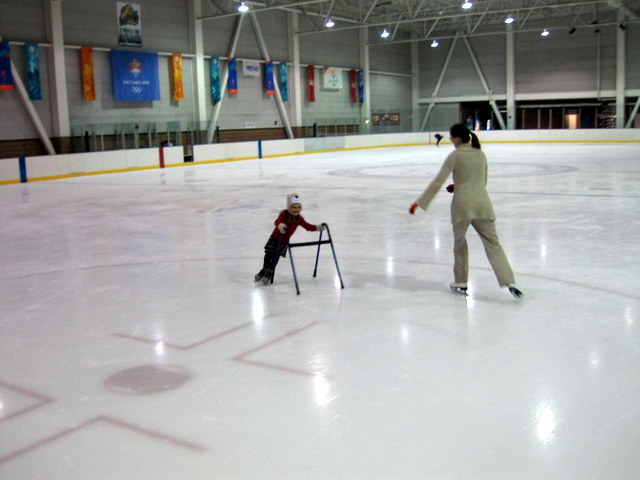 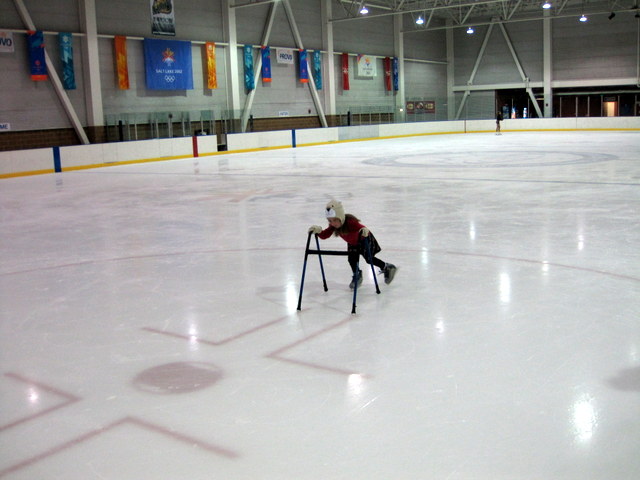 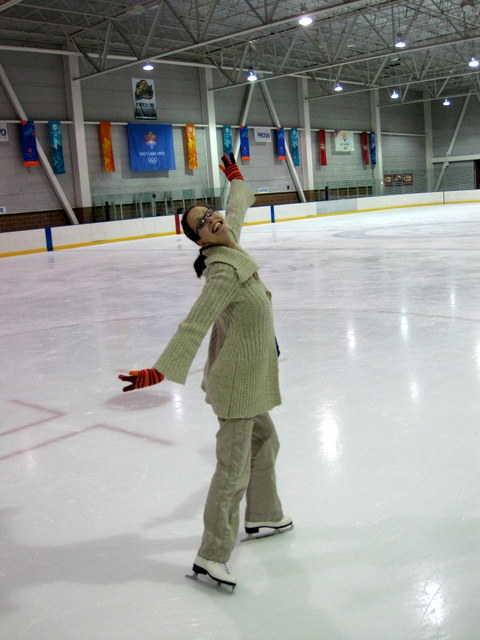 Soon Miriam and Andrew had to join us because we all had to exit the ice rink to make way for the zamboni. 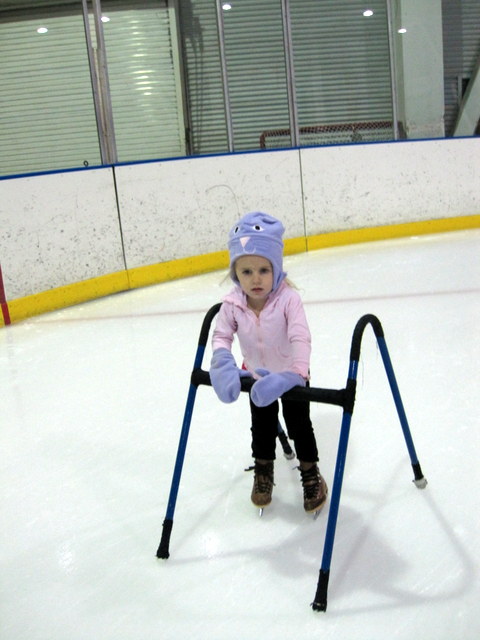 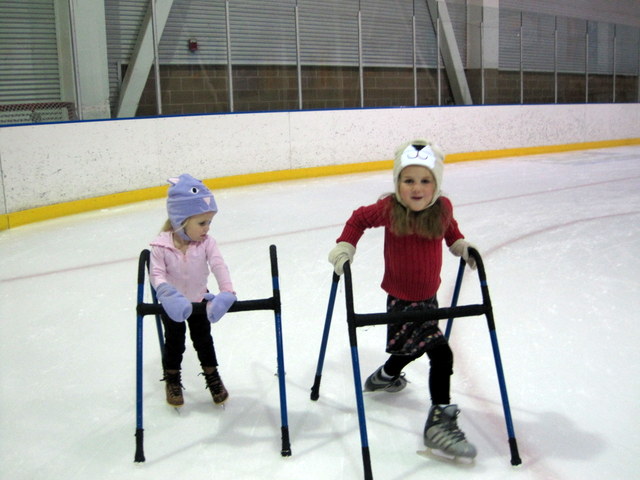 They had fun watching the zamboni clear the ice. 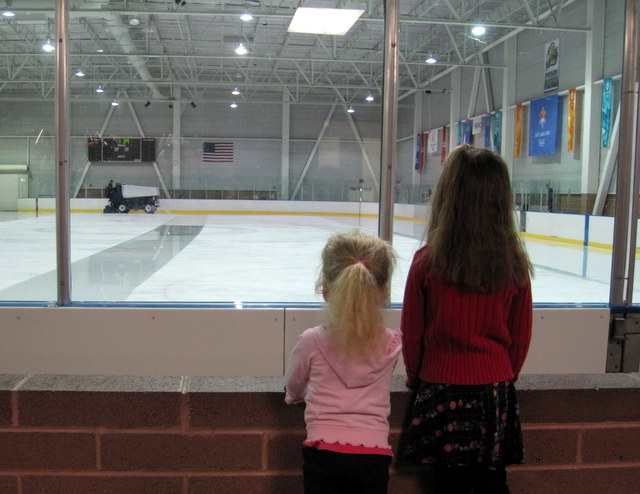 Rachel found the whole process fascinating. Miriam found it to be a slightly terrifying (but still interesting). 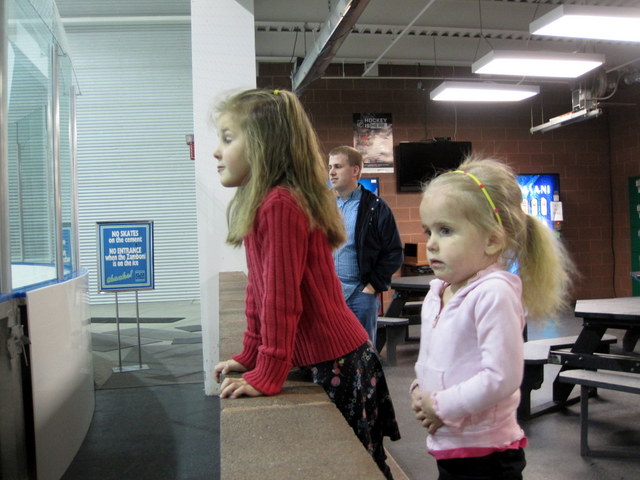 After we'd had our fill of zamboni watching we headed to BYU to run some of our errands. We first returned Andrew's textbook—and Aunt Linda was working (which we knew she would be because that's what she's here from Colorado to do) and we got to go through her line and chat with her for a minute. Then we went to pick out some books to buy with our Bookstore Gift Cards. We stayed in the "bargain zone" and got a whole bunch of fun books, some of which we'll be saving for Rachel's birthday in July (and perhaps for Miriam's birthday in October).
Then we used up the money Daddy got from his textbook on ice cream from the BYU Creamery. He got a whole $4 from selling his textbook back (lame—but Amazon was only offering 60 cents so it was better than that). Rachel had strawberry. Miriam settled for chocolate chip cookie dough (she had wanted oatmeal-flavoured ice cream...has anyone ever heard of that?). 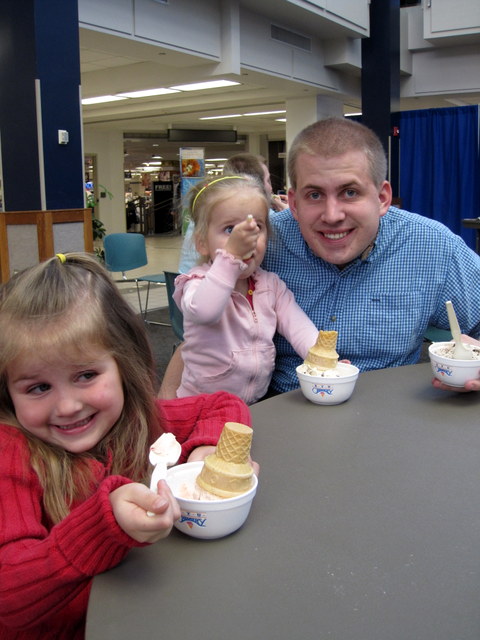 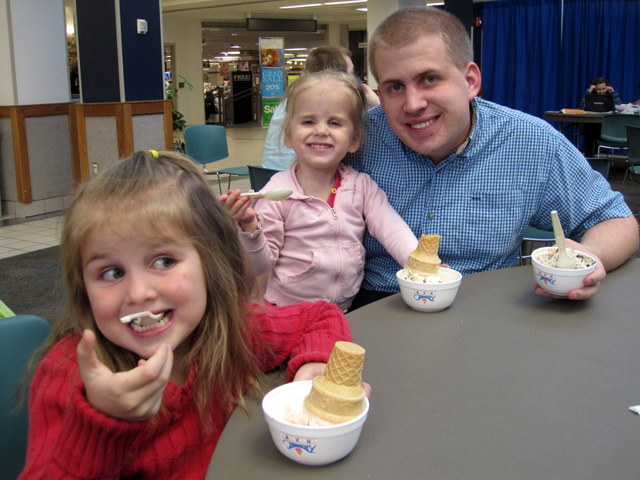 After ice cream we started walking to the Tanner building but got sidetracked at the library because the girls wanted to stop by Naanii's office to say hello. So we did that and then went to the Tanner building to pick up whatever it was that Andrew needed to pick up. There we got sidetracked by people needing his assistance but eventually we were able to get on our way again.
We made our way across campus and back to the van and then drove to the UPS store to mail a textbook to Amazon (they were offering over $70 while BYU was offering like $15 to buy it back) and then to the Orem Public Library to return our books and check out new ones.
Andrew made dinner tonight—he barbecued out on the grill—and then we had an Family Home Evening lesson about "Preparedness," where we did some fire and earthquake drills, including crawling around the house to the front door and then running to our meeting place. Every time we'd get to our "meeting place" Rachel would say, "What's our meeting going to be about?"
I explained several times that we would just be meeting there so that we'd all be together. But every time she'd say, "Yeah. But what will we be meeting about? Like, what will we talk about?"
Finally I said, "We'll come to this spot, which is our meeting place. And then we'll talk about what just happened because if we ever need to use this spot whatever is happening will probably be the only thing on our minds."
When we went over this week's calendar during FHE Andrew said, "Wow—it's a good thing you had us go skating today! The week gets pretty crazy starting tomorrow! I have a bunch of stuff to do on Tuesday and Wednesday, then graduation is on Thursday and Friday, and then we have the weekend and I leave for Ghana! If we didn't go skating yesterday we probably wouldn't have gone until May!"
Rachel's favourite part of the day (by far) was ice skating. She wants to go again (and again and again).
If only we could find her skates...
Posted by Nancy at 11:31 PM