Benjamin has been rocking the nursing scene lately. We've been doing test weights for three days now (four including today) and so far his test weights have been up by 9 and 10 ml (on Sunday), 10 and 13 m (on Monday), and 25 and 10 ml (on Tuesday). He was rather exhausted for his evening feeding yesterday but that's probably because he only had one tube-feeding in between to recover from his huge 25 ml feeding. It was the only way we could see how to work his schedule yesterday, though, since we wanted to go to the parent support group/pizza party/car seat class. We brought the girls with us to do the 4:00 feeding—they hung out in the parent room and watched a movie while Andrew worked and I did Benjamin's cares, and then we all went outside to play by the fountain (which had been turned off by the time we got outside; the girls had fun anyway) until it was time for the support group. 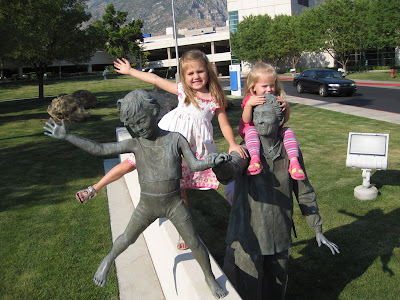 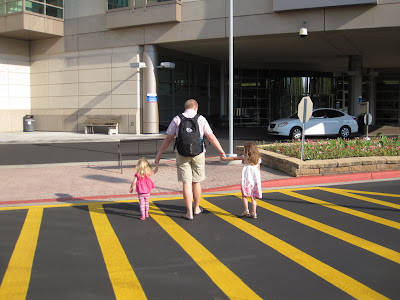 After that we went home, put the girls to bed, and got ready to head back to the hospital for the 10:00 feeding. It felt like we were racing around all afternoon and evening and we only gave Benjamin six hours between nursing sessions when he usually gets between nine to twelve hours to recover. Nursing is just such hard work for this little guy. 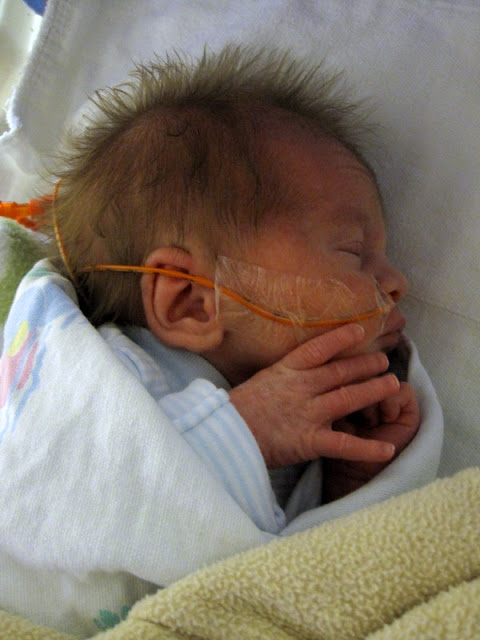 He's recently begun having episodes of apnea and bradycardia (the A's and B's), which he never did before he really started nursing. Apnea is where he stops breathing and Bradycardia is where his heart rate plunges. He had one today just after he finished nursing but he recovered on his own after just a few seconds. His nurse said that it's because his central nervous system is underdeveloped and overworked so he gets a little confused if he works too hard at something—like nursing—and so when he finally decides to stop working he shuts everything down (instead of just stopping nursing).

When he's had enough milk his little brain says, "Okay, everybody stop!" and then when his brain realizes that its being depraved of oxygen it says, "Wait, not you, heart! Keep beating! Lungs, keep breathing!"

It's kind of scary but apparently normal(ish).

While he's nursing he's able to keep his heart rate and breathing levels stable; it's just when he decides he needs a break that he starts struggling. (The neonatal specialist just called after making their rounds and said they might put him back on caffeine or a nasal cannula with oxygen, but only after he finishes nursing, not all the time; they also drew yet more blood so they can check for infection).

This afternoon he nursed for around 15-20 minutes before falling asleep. I kept trying to wake him up because he'd been eating at the rate of approximately 1 ml per minute for his previous feedings and I wanted him to try a little longer (Son! Finish your milk!). I sat him up to burp him and he ended up spitting up a bunch with his burp, which made me kind of sad because I was afraid that he'd lost some of whatever little he got, which meant that his test weight wouldn't be as high. We're shooting to get at least 50% of his feeding through nursing (they give him whatever he doesn't get through his NG tube).

He just didn't want to wake up for anything, though, so we stuck him on the scale to weigh him and he had gained 32 grams! And that's not including whatever amount he spat up on me! We were so happy!

So he only had to have 12 ml through his tube!

He got much more than half his feeding through nursing! Way to go, Benjamin! 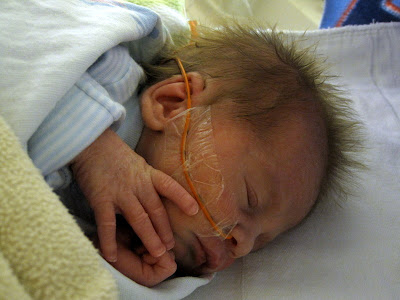 And don't you just love his hair?! It is the softest, most feathery fuzz I've ever felt. And after he gets a bath it sticks up all over like he's just touched a static ball. I love it!

I'm still trying to make less milk. My mom's chest freezer is already halfway full of just breast milk so I've applied to be a donor with Prolacta. They make human milk fortifier and since Benjamin is using that I figure I may as well be giving my milk to that. We'll see how complicated the process is to become a donor.

When I had Miriam, Dr. Omar, her pediatrician, said to remember that making milk was only partially a physical process—the rest, he said, was mental. If I believed I could make milk it would help me make milk. He said he often had trouble with his American patients, specifically, believing that they couldn't make milk...and then they couldn't make milk. "So think milky thoughts," he gave as parting advice before leaving me to try to nurse Miriam because there are no lactation consultants who wander around Egyptian hospitals helping new mothers and babies figure the process out.

Fortunately I knew already that I could make milk (and lots of it!) and Miriam figured out her part right away. We had no roadblocks nursing, Miriam and I...until it came time to stop and she just didn't want to.

I'm not sure that I believed Dr. Omar when he told me that making milk was a mental process. After all, there are plenty of women who genuinely struggle to produce milk.

Now, though, that I've had to "perform," I understand what Dr. Omar means about making milk being a mental process. The first few times I tried feeding Benjamin I couldn't let down at all because I was too nervous. My letdown has always been a little forceful and I was afraid of drowning the poor baby. But now I'm able to letdown and letdown at a rate Benjamin can handle.

The other day, though, when we were working with the lactation consultant and she was trying to help us help Benjamin eat just a little while longer I couldn't make any milk come out. It was so weird. She said, "See if you can just get a little out to tempt him back to the breast." So I did a few hand-expression methods and couldn't get a single drop even though I still had ounces and ounces of milk ready to go.

So I'm a nervous breastfeeder. Kind of like paruresis but for nursing...

Benjamin got 13 ml that feeding anyway, so we were pleased with that.

The morning following the instruction to cut down on pumping, I pumped off 16 ounces in ten minutes! Again. (If you could only imagine the pain I was in before I started pumping...)

Sometimes I wonder how I'm able to make so much milk considering I'm making about the same amount of fluids that an adult should be drinking per day. (If you could only imagine how much water I guzzle on a daily basis...) 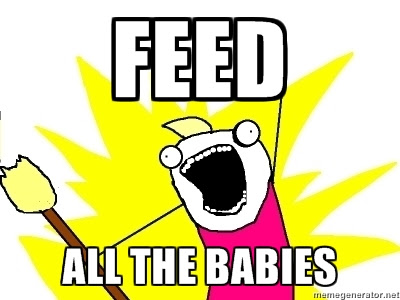 My body responds to my subconscious like it's the voice of reason (even though I'm making enough milk to feed about three babies—and I know it).

Somehow I need to convince my body that I only have one baby and that I have more than an adequate milk supply for that one baby, so I've been doing a bit of reading in order to persuade my subconscious into turning off the milk spigot.

KellyMom typically has good advice about breastfeeding and I found an article on her site that says, "Current breastfeeding research does not indicate that breastmilk [sic] intake changes with baby's age or weight between one and six months. After six months, breastmilk [sic] intake will continue at this same level [19-30 oz per day] until...baby's milk intake begins to decrease...." usually when solid foods are introduced. The reason the quantity of the milk doesn't change, as I understand it, is because the composition of the milk changes as the baby ages.

So really, once I'm down to making only 30 ounces per day I won't ever have to increase my milk supply because that's as much as Benjamin will ever need. And in fact will probably still be too much since that's in the high range of milk intake for a baby. I've already pumped 45 ounces today and I still need to pump two more times...*sigh* I have no idea how to decrease milk supply without an actual baby to nurse.

I didn't have a single problem nursing Miriam,* except that I made far too much milk. But I discovered block feedings with her, which was a very efficient way of decreasing my milk supply naturally. Unfortunately I'm not really sure how to do that with a pump because pumping is quite a bit different from nursing. I'm trying to do everything the lactation consultants tell me to do, from eating/drinking pineapple to sleeping with cabbage leaves. So far my supply has remained consistently high. I'll keep working on it, though, and since I know that milk production is x-percent a mental activity I will keep reading articles explaining how little milk babies actually need so that my subconscious will relax and let me make less milk. Because I don't need to feed all the babies. I only have to feed my baby.

*Rachel and I took five full months to really be comfortable with breastfeeding—overcoming flat/inverted nipples, weaning her off the nipple shield, several bouts of mastitis, a boil, and overproduction. I hope Benjamin and I don't take as long to fall into the swing of things, though we're sure having plenty of obstacles, aren't we? I mean, considering it took him two weeks of life to nurse at all.
Posted by Nancy at 9:00 PM