On August 4th, my mom and mother-in-law threw a baby shower for me. My mom decided that because everything was so weird when Benjamin was born he deserved a celebration now that he was home and healthy. It was a bit of a last-minute party so I was surprised at how many friends were able to make it.

A couple of nights before the baby shower, Karen came home from shopping with blue jelly beans, blue gummy bears, and pretzels dipped in blueberry yogurt.

"They're for the party!" she announced cheerfully.

I knew Reid and Karen were going to a BYU party the next day and she had just sent me an invitation for the open house they'll be having at our new home this Friday (that I'll miss) and I figured that since BYU's colours are blue & white and Duke's colours are blue & white that the candy could have been for either party, though I couldn't figure why she'd buy party food here for a party in North Carolina.

The shower was a lot of fun. We were a little nervous at first that no one would show up because it was just me, my kids, my mom, Josie, Rosie, Karen, Katharine, and Sarah. Not that that would have been a terrible party, but come on! 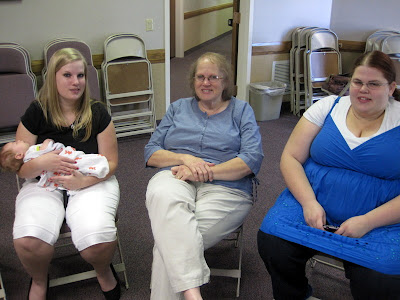 Soon my friends started filtering in. Krystal was the first to arrive with her kids. I was excited to meet her miracle baby, Martin, who was born at 29 weeks after she'd spent five weeks in the hospital on bed rest. She was such a good friend through all of this--she lent me her preemie book, gave us tender grips and other things for Benjamin's oxygen days, sent multiple notes of encouragement, and was altogether amazing! 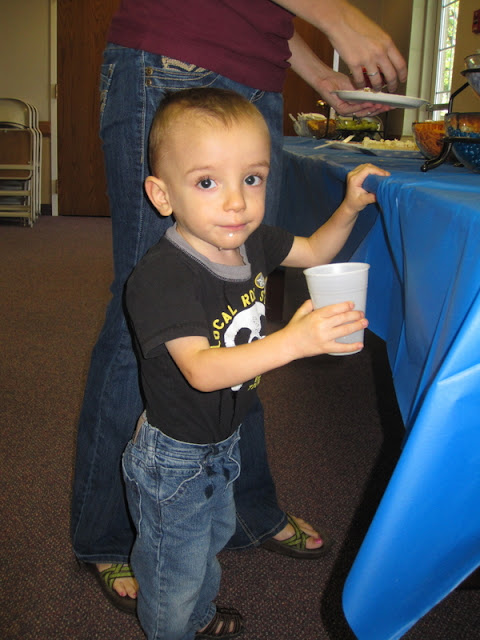 I didn't get a picture of us together on my camera, except for this one: 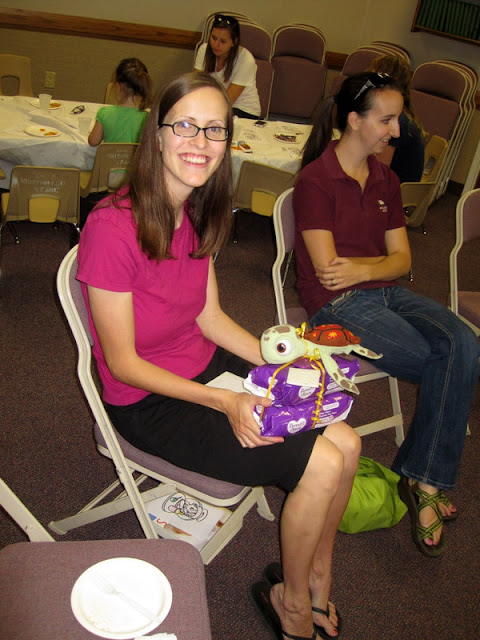 But I think my niece put a better one of us up on facebook. Speaking of my niece, here she is colouring with Rachel at the kid's table: 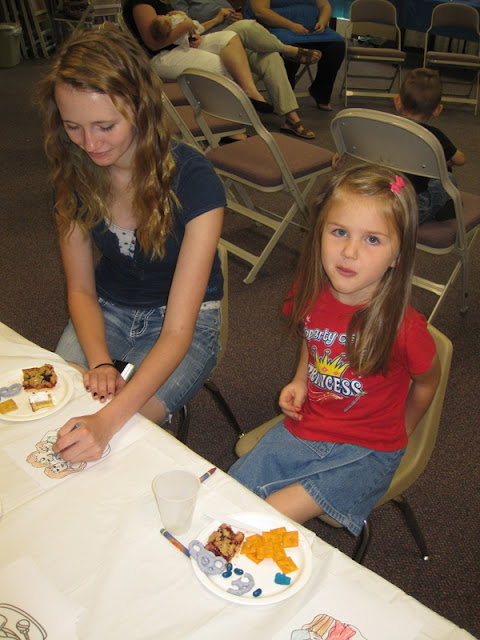 I have a couple of doppelgangers running around town--my friend Bonnie from our days at Orchard Creek: 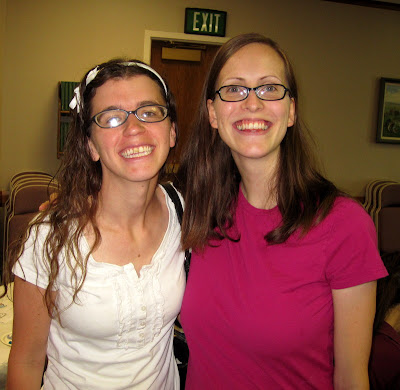 And my friend Noel, from my parents' ward: 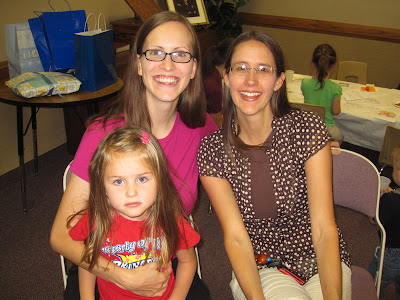 We had a lot of people drop in: 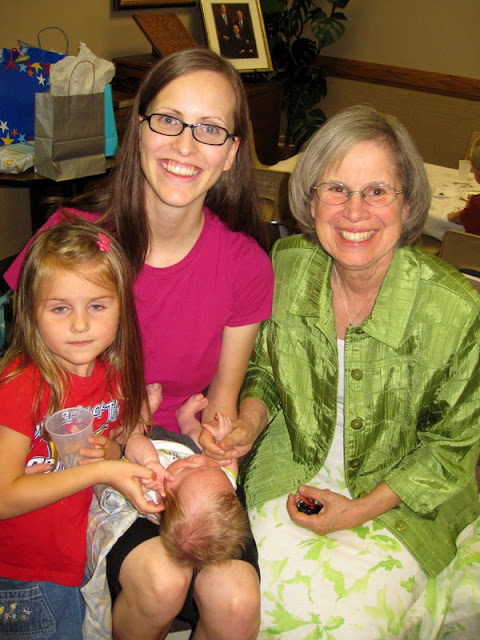 I was super excited for my friends Courtney and Shallee to get there. They don't know each other but they were due on the same day--July 16th. My due date was July 18th so you can imagine they both freaked out a little when I had Benjamin so early. Courtney ended up having Laila on July 5th at UVRMC and she left the hospital the same day we left with Benjamin (July 7th). Unfortunately we didn't ever see each other in the hospital; I left her a message asking her what hospital she was at because we did our 24-hour request on the 6th and were at the hospital all day but she never got back to me...it was like she was busy with a new baby or something.

Shallee's baby Amaya was a little stinker and came a day late, on July 17th (which also happens to be Shallee's birthday). 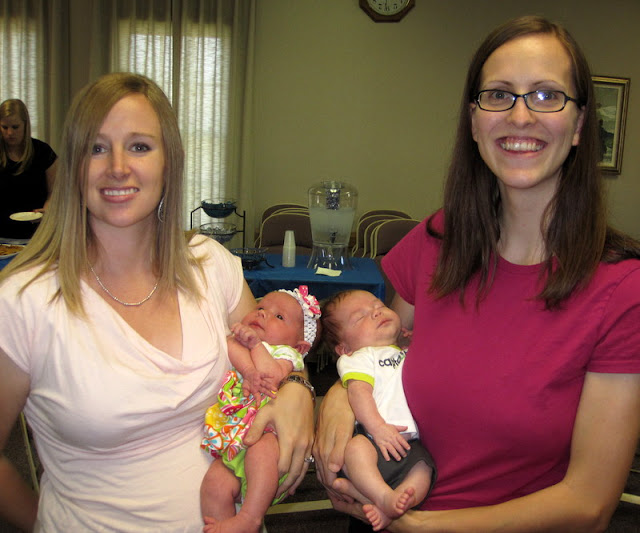 I loved seeing Benjamin next to these new babies! He looks just about the right size and so healthy! His skin is more developed, simply because he's been out in the world longer (that's why he's white and the girls are pink--his skin is, literally, thicker) but other than that he looks right on target for his gestational age (though he's still super small for his actual age).

Let's see...what else happened? Some aunties got some good snuggles in:

We had some more friends stop by...the whole Jacobson clan came, including Doug. See, I thought that Andrew was going to come since this was also a "last chance to see the Heiss family" party, emphasis mine. But Andrew chose to stay at home and work and watch the Olympics. So Doug was the only guy there, except for my brother David who came to take pictures. Doug was probably very glad that David was there and vise versa.

I had a few more friends from high school stop by. Marquita came with her two girls. Words cannot describe how much I love this picture of Rachel with Vivi and Maya. 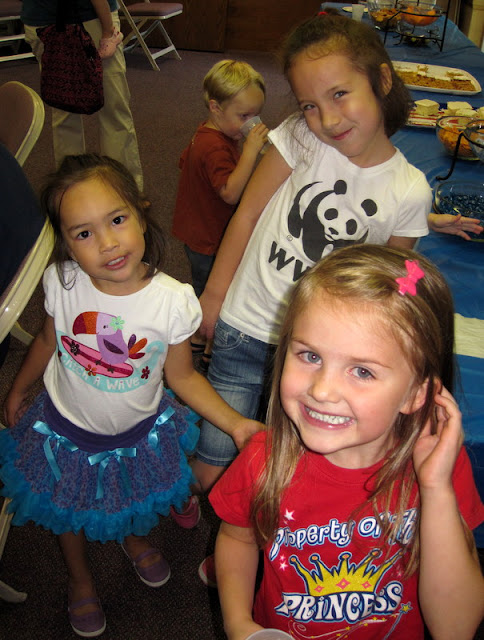 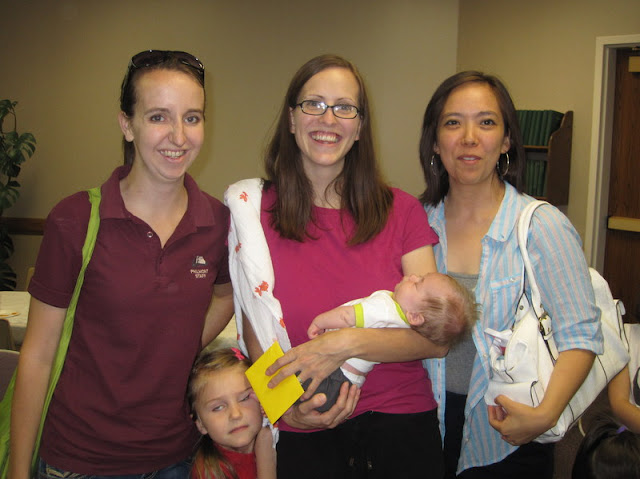 My friend Cristina came too. She brought me a jar of jam, which I'm rather excited to try. At my last baby shower (for Miriam) I got peanut butter so getting jam for Benjamin was a lovely counterpart. 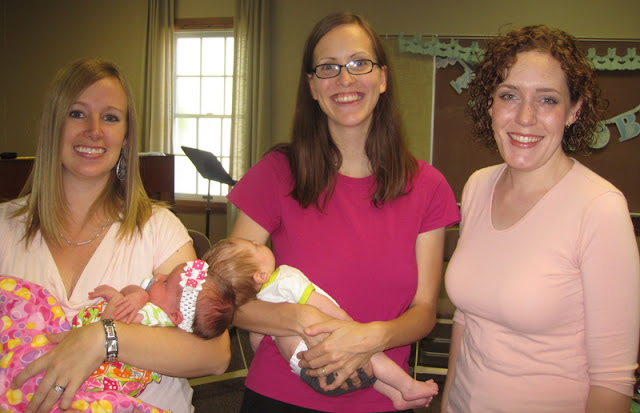 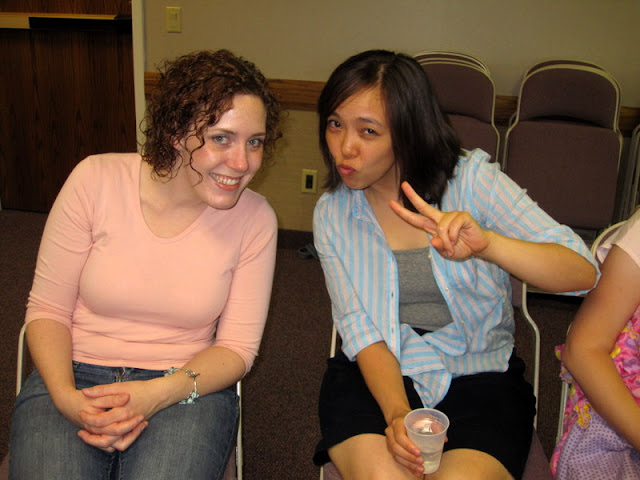 Several friends from our ward stopped by, too. Sister Dusara came--she only noticed I was expecting at the end of May when I was walking Rachel home from school one day so it was probably a bit of a shock for her when I had Benjamin at the beginning of June (but really, who wasn't it a shock for?). 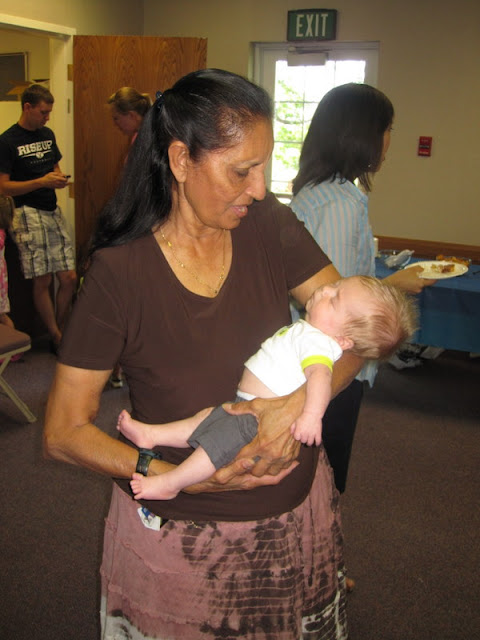 As far as I know, everyone had a fun time--even the little kids (Uncle David took them all down to the cultural hall to run around...I think there were at least ten of them when he did that (brave, brave man)). 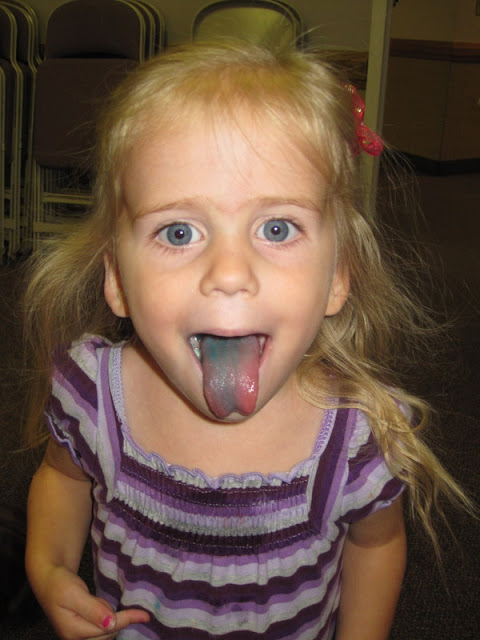 Even Benjamin survived to the end without getting too cranky, though he did manage to fill two diapers and spit up all over creation. 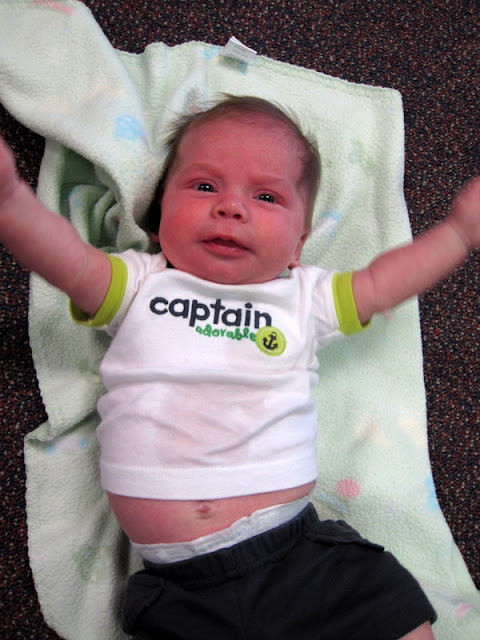 I wish I would have kept my list of gifts here with me instead of sending it with Andrew, not only so that I could get started on thank you notes but also because people keep dropping gifts by (which means I need to be adding to that list)! We have some great friends here--look at all the good stuff we're leaving behind! But, as we learn from UP!, "Adventure is out there!"
Posted by Nancy at 10:57 PM